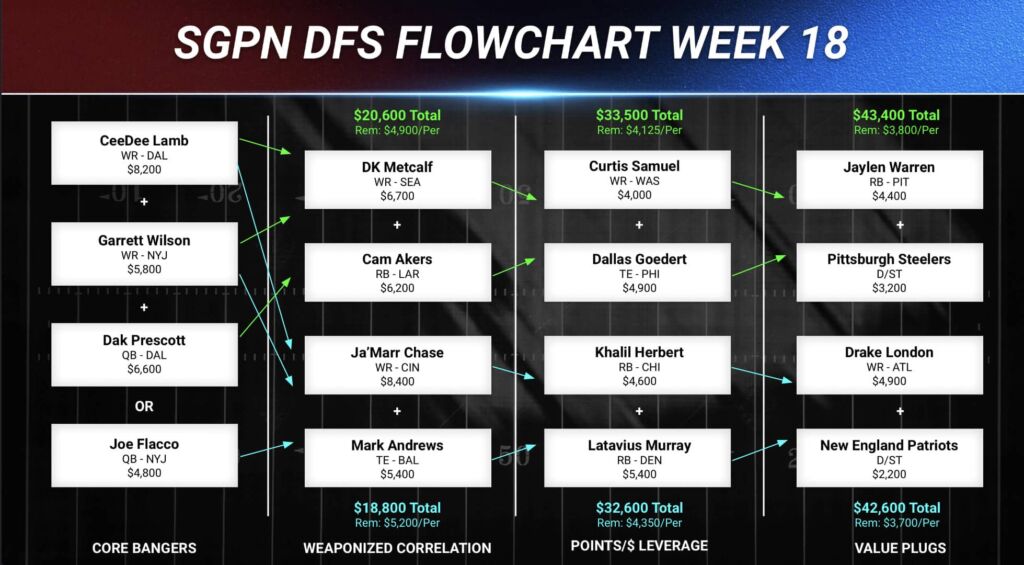 The GOAT lives on! Stacking around Tom Brady was excellent with Chris Godwin but gargantuan with Mike Evans last week. The rest of the pool was okay, buoyed by some huge point totals from a select few players. The Week 18 NFL Flowchart centers around the 13 games on the Sunday main slate and will not include the two games on Saturday.

A word for the wise is to try and avoid over-exposure to vets on teams with nothing to play for. At the same time, Week 18 provides some real opportunities for young players who might not have seen many opportunities to this point. The real fireworks this week will come from the games that have playoff implications. Those games will have a lot of chalk but also plenty of leverage plays, of which we will take advantage.

The Week 18 NFL Flowchart is a visual representation of my lineup-building thought process. It is condensed into two diverging paths for the sake of digestibility and protecting you all from knowing just how incredibly loony I am. Here are some of my core thoughts for Week 17 on DraftKings.

Get “Skinny” With Flacco

Fun fact: ‘Flacco’ means “flabby” in Italian. I relate to that a lot. I can also relate to what the Jets’ offense turns into when Joe Flacco is under center. In his three starts this season, he averaged nearly 52 passing attempts. Garrett Wilson accounted for 33 of those targets, including 14 versus Cleveland, where he racked up over 100 yards and two touchdowns.

New York’s season has unraveled in the second half, but their rookie WR from Ohio State has been incredible. The Miami Dolphins are among the weakest pass defenses in the league and won’t offer much resistance to this Jets’ passing attack.

I had high hopes for Ja’Marr Chase last Monday night against Buffalo. I will continue to pray for and send good vibes to Damar Hamlin (Side note: Get your CPR certification!). This week is pivotal for the AFC playoff picture, which is an absolute gauntlet.

Chase was double-covered in his last meeting with the Ravens in Week 4 when Tee Higgins was knocked out of the game with an injury. They are both healthy, and Joe Burrow has eviscerated Baltimore’s defense throughout his short career.

Pairing him with Mark Andrews on the other side gives your lineup build some hidden upside. Andrews is the only Baltimore offensive player with a big upside in this game, and this game could shoot out.

Watch for the Helpers

Everyone loves playing the bell cow RB. I’m here to say I’m just as guilty. Najee Harris and David Montgomery are in my player pool this week with wonderful matchups. They will also be pretty chalky for tournament play and a tad overpriced to boot.

I submit that in GPP tournaments, one could make a better living with Jaylen Warren and Khalil Herbert, respectively. They cost thousands less to the roster than the starters and will have nearly identical ceilings because of receiving and big play upside.

For my money, I’d rather attack popular skinny stacks with massive upside and fit in more studs because I saved salary on bargain RBs with sneaky high ceilings.

Week 18 has some games with huge implications. It also has some games that mean nothing at all to most people. They still mean a lot for young players looking to improve their standing with the team leading into 2023.

Rookies everywhere will see a bump in usage this week, opening the door to some extremely juicy leverage for DFS sharps. Drake London has my attention this week. I expect the Falcons to finally open up the playbook for Desmond Ridder and air it out to weaponize their stud WR from USC.

Another rookie who might make a ton of noise from out of nowhere in Week 18 is Velus Jones of the Bears. Minnesota really struggles to cover WRs in the middle of the field, especially when they have speed.

Nathan Peterman is awful, but the Bears will dial up some trickery early in the game to catch the Vikings by surprise. I am also going to play a rookie stack against Dallas with Sam Howell and Jahan Dotson. The last rookie I’ll mention is Khalil Shakir of the Bills. His red zone usage has increased in the past few weeks, and he is outplaying Gabe Davis and the other WRs not named Stefon Diggs.