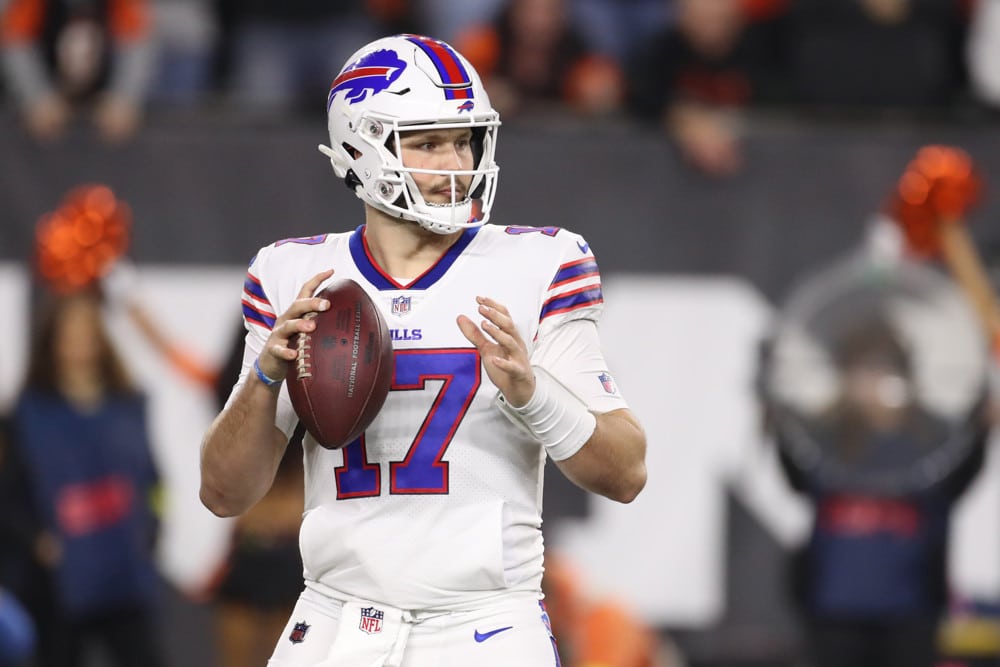 The fantasy football season is officially over. But only as far as games are concerned. There’s still a lot to do in the offseason. Now is the time to tinker with potential trades that can help you next year.

And, since we’re talking dynasty, not only next year but for years to come. It’s time to build your empire. And we have created the fantasy football dynasty trade value chart to help.

This chart is not an end all, be all. And, at Sports Gambling Podcast, we’re never satisfied. We will continue to tweak this and do our best to perfect it. But it can give you a good start.

At the bottom of this article, I’ve worked on some real-life examples where I’ve used the trade chart value to evaluate some trades for a dynasty team I took over just a few days ago.

As you may have seen in the past several months, we’re inputting Superflex numbers for quarterbacks. We’ve adjusted them slightly again after some feedback. It shouldn’t be surprising to see Josh Allen sitting atop the quarterbacks. He’s also the top player in a Superflex league on the fantasy football dynasty trade value chart. Allen averages 24.3 fantasy points a game and remains one year younger than the second player.

That second player would be Patrick Mahomes, who finds himself just a point behind Allen. I’ll admit, I had doubts about Mahomes’ ability to put up the same numbers without Hill. That was misplaced doubt.

Jalen Hurts is tied with Mahomes. There may be concerns on his long-term longevity due to his rushing ability causing him to take more hits, but he’s a young electric player that can win your league.

Young guns Justin Herbert and Joe Burrow are tied for fourth. Lamar falls slightly down the list due to concerns that he may become injury prone. One player to keep your eye on is Justin Fields. Though there may be doubts about his passing ability, he showed this year he can be an electric player as he finished as the sixth-leading rusher in the NFL.

i looked up josh allen's most impressive throw this year according to zac taylor and holy shit pic.twitter.com/rLYAsBlNJY

The top 60 running backs on the fantasy football dynasty trade value chart are shown above. To see the full list, utilize the downloadable file within this article. Christian McCaffrey finds himself at the top of the list for running backs and overall standard. After being traded to the San Francisco 49ers, McCaffrey has shown the ability to not only return to the number one spot but to stay healthy.

Tied behind him are Jonathan Taylor and Saquon Barkley. These two couldn’t have had more opposite seasons. Taylor had a disappointing season with on and off injuries, while Barkley returned from injury and was considered a comeback player of the year. Keep eyes on where Barkley may end up next year if he ends up on a different team, given that his contract is up.

The next highest running back is Breece Hall, who looked excellent for the Jets before his injury. Slightly down the list is Austin Ekeler. Despite being older than the top four players, he led all running backs in fantasy football this year. Whether he’ll be able to do that once he turns 28, however, for now, his value can’t be denied.

Here’s your reminder that Christian McCaffrey is a 49er #FTTB pic.twitter.com/9ZMtu0daR3

Much like the running backs, you can find the full wide receiver list in the attachment within the article. Topping the receivers and the entire trade value chart is 23-year-old Justin Jefferson. He averaged 22.6 fantasy points a game, which led all receivers. Close behind him is 22-year-old Ja’Marr Chase. Either of these guys is as solid as you can get for the building blocks of your dynasty team.

Third, after his first year on the Eagles, is A.J. Brown. Brown is only 25 and showed this year that he is exactly what Hurts and the Eagles needed to take their offense to the next level. Fourth on the list is the oldest guy in the top five, Cooper Kupp.

Prior to the injury, Kupp looked like he was on his way to finishing as one of the top receivers again. Watch closely what the Rams and Stafford do; however, he’s still looking like a top receiver.

Even with some inconsistent play at quarterback, fifth on the fantasy football dynasty trade value chart list is CeeDee Lamb. Lamb is still only 23 years old. He’ll turn 24 prior to next year. However, he’s still a heavily targeted receiver. Averaging 17.8 points a game, Lamb can be a building block for your dynasty team.

It feels weird not having Travis Kelce at the top going into another year, yet he falls to second due to being 33 years old. He outscored all tight ends by far, averaging 19 points a game. Mark Andrews was behind him in average points per game, but at 27, remains one of the top tight ends in the league.

Third on the list is Kyle Pitts, who had probably one of the most disappointing fantasy football seasons out of all players. Expectations are still high as we will see what Arthur Smith has planned next and who starts at quarterback in 2023.

At age 25, T.J. Hockenson has the potential to top this list in the next few years. He’s always been very talented, but his trade to the pass-happy Vikings will only improve his stock.

Fifth among tight ends is George Kittle. Kittle’s talent has never been an issue, but his health has been. At 29 years old, he may not have many years left to show he can continue staying healthy. It also is yet to be seen how he’ll perform with Trey Lance at the helm.

They put AJ Terrell on Mark Andrews and he just ran right by him. Set him on fire pic.twitter.com/88JXRZPbYR

I recently took over a dynasty team and thought I’d start making some moves. Not only to work on improving my team but to start making it my own. With Russell Wilson, Kenny Pickett, and Desmond Ridder as the three quarterbacks on the team, I decided an upgrade at quarterback was priority number one.

My team received: Jalen Hurts and Miles Sanders.
I sent Isaiah Pacheco, Michael Pittman, and a 2023 3rd round.

Looking at the Dynasty trade value chart, Hurts is worth a value of 22. Sanders holds a value of 24. That has a total value of 46. On the other hand, Pacheco has a current value of 12, though he could easily go up if the Chiefs move on from Clyde Edwards-Helaire. Pittman was the player that was the hardest to get rid of was 31. Draft picks are always hard to grade before knowing where they will fall within the round. However, a third-round pick has a 10.

Breaking that down, I received a trade value of 46 while giving up a trade value of 53. While the other team involved got a better value by seven, I felt it was worth it to get a franchise quarterback for my dynasty team.

Other Trades On The Table

Here are a few other trades that are currently on the table. I was offered Geno Smith (trade value of two), and a third round (trade value of ten). I would be giving up Russell Wilson (13). This benefits my opponent by one, but is still something worth considering, mainly because I’d regain my third-rounder.

This is a situation where you have to really evaluate what you want on your team. I don’t like giving up the top tight end, a top quarterback, and a promising young wide receiver, despite the mega value I would get in return. Though, technically I have not declined the trade yet. It’s a 24-hour offer, so time is ticking.