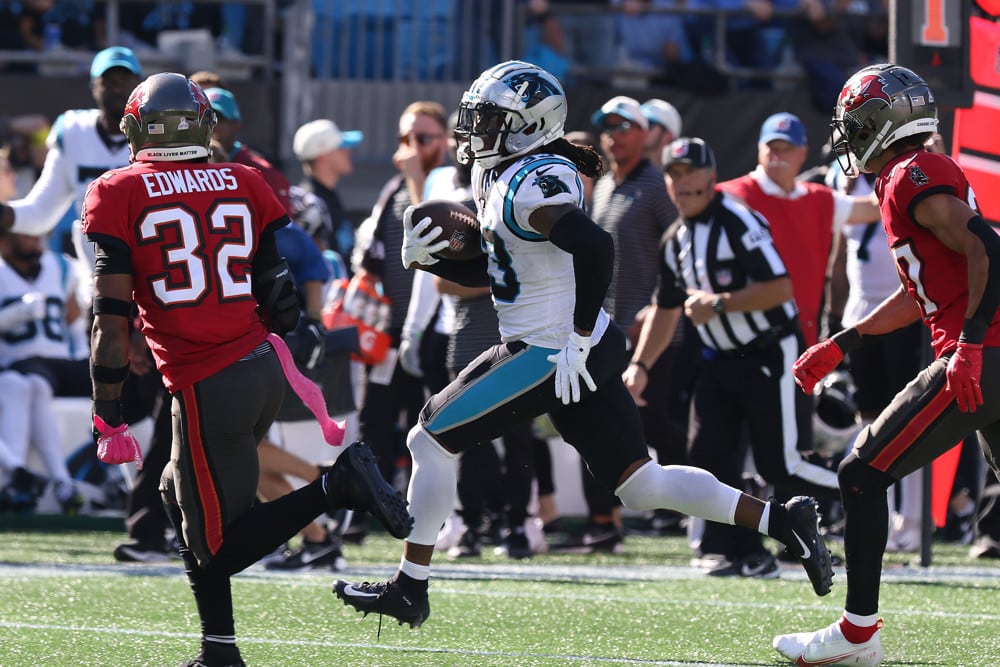 Just two weeks remain in the NFL regular season. Some teams have playoff spots locked up, and some have been eliminated from the playoffs and have nothing to play for. What better way to kick off the year 2023 than with the main slate of NFL games while you nurse that hangover? Let’s take a look at some of the NFL Week 17 best bets using lines from our friends at WynnBET.

For a game with two teams with losing records, there is a lot on the line in this one. The winner of this game has complete control of the NFC south and their spot in the playoffs. These teams matched up in Week 7 with the Panthers taking down the Buccaneers at home 21-3. Tampa Bay is one of the best teams on the season favoring the under, going 11-4 so far.

Carolina is right down the middle with a slight lean towards the under at 8-7. The Buccaneers rank 28th in the NFL in points scored per game (17.7). The Panthers check in 18th (20.9) in points per game. A divisional game with the playoffs on the line in Week 17 screams to me to take the under. This game should be a low-scoring slugfest. Give me the Panthers at plus odds (+3 -110), but the under is the one I love in this game.

The Panthers were +500 to beat the Buccaneers today and they won by 18 POINTS! 😱 pic.twitter.com/lmwqyOksae

Sticking with the under-theme in this one. With a lot of divisional matchups, teams that have already seen each other this season, and injury-plagued rosters it’s looking like that type of week. This is a matchup of Mac Jones vs Teddy Bridgewater. Yes, there are some flashy pieces like Tyreek Hill and Jaylen Waddle who should get theirs, but when these teams matched up back in Week One with Tua Tagovailoa at the helm for the Dolphins the final score was 20-7.

New England has one of the top defenses in the league checking in at 5th in points allowed per game (19.4) and a middling offense at 16th (21.2). Miami has been the opposite with the 9th-best scoring team in the league (24.3) and the 27th-worst defense (24.7). With Tagovailoa missing a few different games this season, the Dolphins have gone 0-3 without him, and are currently on a four-game losing streak. The Patriots have also lost four of their last five games and both of these teams will want to run the clock out as quickly as possible.

Deshaun Watson leads his 6-9 Browns to the nation’s capital to take on the 7-7-1 Washington Commanders. The Browns have been eliminated from playoff contention while the Commanders are currently clinging on to the seventh and final spot in the NFC playoffs.

The Browns are 2-2 since the return of Watson from his eleven-game suspension, while the Commanders are on a two-game skid after a tie with the New York Giants in Week 13. Both teams are about equal when it comes to covering the spread overall, and are respectable on the road and at home. This comes down to the Commanders having something to play for, plus home-field advantage while the Browns are looking forward to their next massage on vacation. Give me the Commanders

This is a matchup of two teams going as far in opposite directions as possible. If you would have said Brock Purdy would be a double-digit favorite a few weeks ago, everyone would think you might be insane. Fast forward to Week 17, and the Raiders announce Derek Carr will be benched for the rest of the season. Then Carr stepped away from the team, and Devante Adams is now upset, the main reason he wanted to be traded to Vegas was to team up with college teammate Carr.

Brock Purdy and the 49ers on the other hand are one of the hottest teams in the league. San Francisco is on an eight-game win streak, 3.5 of those games with Purdy at the helm. During that win streak, they’ve won by an average of 17 points. The 49ers are very much alive for the #2 seed in the NFC and the Raiders are quickly turning into a dumpster fire.

Jerick McKinnon has gone over this number in his last three games. The Chiefs have one of the most productive passing games in the league as well. They rank 1st in pass yards per game, 5th in passes per game, and second in yards per completion.

In Week 14 the Chiefs faced the Denver Broncos on the road. This weekend the Broncos head to KC, in that Week 14 matchup McKinnon had 9 targets, 7 catches, and 112 yards receiving. If McKinnon can get just a third of this production he will cover this bet.

Leonard Fournette has become the Tom Brady safety blanket as the season has progressed. Fournette has surpassed this number in four straight games and six of the last seven. Last week Fournette had 10 targets for 9 catches and 90 yards.

The Panthers were able to hold Fournette to just 7 receiving yards in their Week 7 matchup where Leonard had just three targets. Since Week 3 Fournette has passed this number in ten of twelve games. Brady is looking to get the ball out quickly and Fournette is a guy he can trust.

Thank you for checking out this NFL Week 17 Best Bets article presented by the Sports Gambling Podcast Network. Check back with SGPN daily for more betting content and advice.