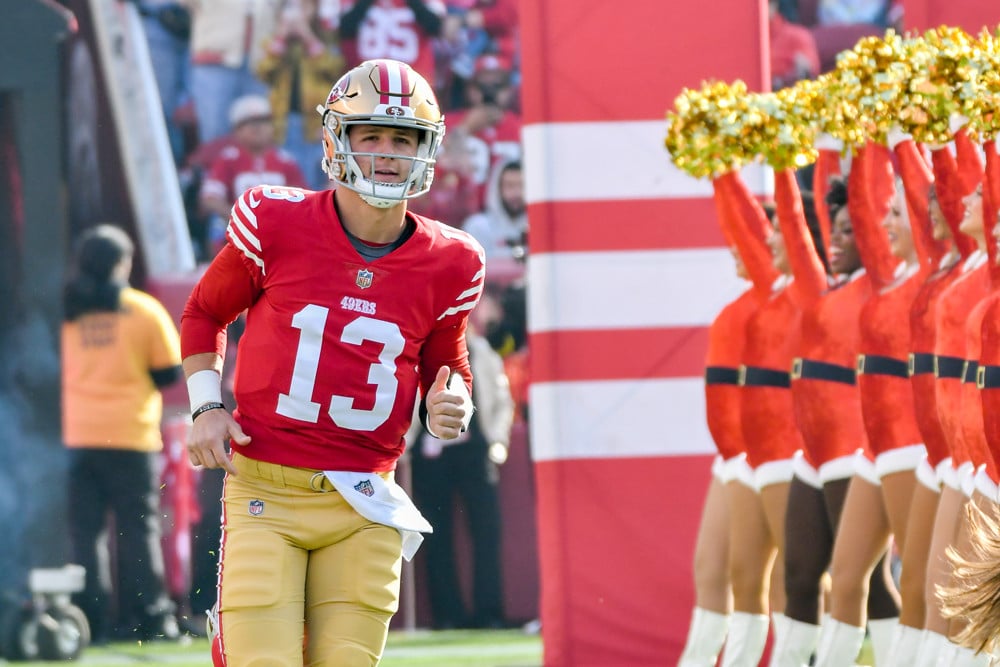 Hello everyone and welcome to the final fantasy football streaming article of the 2022 season. I can speak for the rest of the SGPN staff in saying what a pleasure it has been bringing you all fantasy football content this year. While the NFL regular season is ending, the SGPN fantasy football staff is already looking forward to next season. We have tons of content planned for the coming weeks so check back daily for 2022 season wrap-ups, 2023 rookie prospect profiles, and previews for next season.

With that here are some of my favorite Week 17 fantasy football streamers for those playing in a championship this weekend. These are fringe starters, but players that should have solid fantasy performances if your team is in a pinch. Good luck this weekend and I hope to see you back here soon with a championship ring around your finger.

Since coming in for an injured Jimmy Garoppolo, Brock Purdy has filled in admirably as the third starting Quarterback for the 49ers this year. He has finished as a top 15 fantasy Quarterback each of the last three weeks and has thrown 8 touchdowns over four games as well. While he is playing in a very talented offense, this is very impressive for the last pick in this most recent NFL draft.

Furthermore, Purdy has posted nearly identical numbers as Garoppolo in yards per attempt, completion percentage, and fantasy points per dropback. While these numbers don’t tell the whole story, it’s remarkable how the offense hasn’t missed a beat. Purdy will also be in a tremendous matchup this week against a poor Oakland Raider defense that ranks 18th in fantasy points given up to the Quarterback position.

He plays conservatively, but that is perfect for this team and offense. The defense is arguably the best in the NFL, and the skill positions are packed with playmakers who can make yards after the catch. Simple designed plays to Christian McCaffrey and George Kittle have worked well over the last few weeks, and Brandon Aiyuk can keep teams honest over the top. He’s a top 15 option for me in Week 17 as he has been, with the upside for more if they can break some big plays.

Another unlikely streaming option, Mike White was a revelation for this offense in the three games he played between Weeks 12-14. He finished as the QB6 and QB7 in fantasy in his first two weeks, before ultimately struggling in an ugly game in Buffalo in Week 14. Josh Allen didn’t play well either in the weather conditions though, only passing for 147 yards and a passing touchdown in a 20-12 win.

After missing two games due to injury, White will enter back into streaming territory in a soft matchup against the Seattle Seahawks defense. They are 22nd in fantasy points given up to Quarterbacks, and Derek Carr, Geno Smith, and Brock Purdy have found success against them in recent weeks.

There is actually a lot of talent in the New York Jet offense too that only Zack Wilson can’t seemingly find. White is also a top 15 option for me this week, and someone I would comfortably start over the likes of Tom Brady or Deshaun Watson.

After a murky Running Back rotation for most of the season, Tyler Allgeier has begun to take over this backfield in the last two weeks. He’s finished as a top 12 Running Back in each performance on his way to 213 total yards and a touchdown. The Falcons drafted Allgeier in the 5th round of this most recent NFL draft after two extremely productive seasons at BYU.

Poor testing at the combine ultimately hurt his draft stock though, but he was a sleeper candidate because of the lack of depth on the Falcons’ offense. It took a little longer than some fantasy managers expected, but here we are going into a great matchup in Week 17. The Cardinals are just waiting for this season to end as well, and have given up the 10th most rush yards per attempt in 2022.

Arizona has virtually no chance of getting up my multiple scores either, ensuring Allgeier should get plenty of rushing attempts throughout the game. I have him ranked as a fringe RB2, but could see myself moving him into the top 20 when I complete another rankings update.

After speculation of who would end up the lead Running Back between Zach Moss and Deon Jackson, those questions have been answered. Moss has clearly taken over the lead role after playing over two-thirds of the snaps each of the last two weeks. He’s paced the team in rushing attempts over that time too, and I don’t expect that to change in Week 17.

The Colts’ offense is a mess, but Moss will be a streaming candidate based on volume alone against a Giants team that is poor against the run. As long as the Colts can remain competitive, he should play a large role and has backend RB2 upside. That is the concern though, as Nick Foles will be the starting Quarterback and this game could get out of hand quickly. He’s not the most exciting streaming option, but you could do worse if Derrick Henry has put you in a pinch. Moss is the RB32 in my most recent rankings update.

While Christian Watson appears on track to play this Sunday, I still like Allen Lazard as a streaming option this weekend. This might sound crazy considering he hasn’t finished as a top 33 fantasy Wide Receiver since Week 9. Furthermore, the Packers’ offense has struggled to click all season, and Lazard has taken a backseat to Watson in targets. It’s all about the matchup this week though as the Minnesota Vikings rank dead last in fantasy points given up to the Wide Receiver position.

After struggling most of the season, Aaron Rodgers is a borderline QB1 in Week 17 for me as well, and he should be able to produce multiple fantasy receivers. Watson could get a lighter load this week too dealing with an injury, and Lazard did just receive 11 targets last week. He’s a solid WR3 or flex in Week 17, who would vault in the rankings if Watson were to miss the game.

After a strong start to his rookie season, a hamstring injury derailed Jahan Dotson’s year as he ended up missing five games. He was worked in slowly upon his return and didn’t receive a full complement of snaps his first few games back. Dotson has played fantastic these last three performances though, totaling 235 yards and a touchdown in each performance.

While a change to Carson Wentz had me nervous at first, he had an outstanding rapport with him early on in the season. Astoundingly, he is still available in a whopping 53% of Sleeper leagues too. He’s my WR29 on the week and a locked-in fantasy starter in three Wide Receiver leagues or those with multiple flex spots.

Don’t look now, but after being left for dead by most fantasy analysts Tyler Higbee has bounced back in recent weeks with back to back TE1 performances. He was by far and away the most targeted option in Week 16 against the Denver Broncos accumulating 11 targets. Given the Tight End landscape, he will be right back into backend TE1 territory given there aren’t many better options.

As long as Baker Mayfield continues to keep games competitive, Higbee should continue to see a healthy number of targets as well. Their opponent in Week 17, the Los Angeles Chargers, have been struggling on defense as of late and could be without star Safety Derwin James in this matchup too. Higbee is the TE8 for me this week and is still available in 34% of Sleeper leagues.

After little involvement in the offense through the first eight weeks of the season, Cole Kmet has received a significant number of targets in the second half of the season. He has gotten six or more pass attempts thrown his way in five of his last seven games. Much of his production coincides with the absence of Darnell Mooney, who is out for the remainder of the 2022 season. The Bears had arguably the worst receiving core in the league with Mooney, leaving little target competition for Kmet.

This is good news for fantasy managers as Detroit has struggled mightily against the pass this season. Justin Fields does most of his damage with his legs, but he should have some opportunities to make some plays downfield as well. Kmet is a high TE2 for me this week and a great waiver wire target for those in deeper leagues.