Dynasty Football: What Players are Worth Pick 1.01? 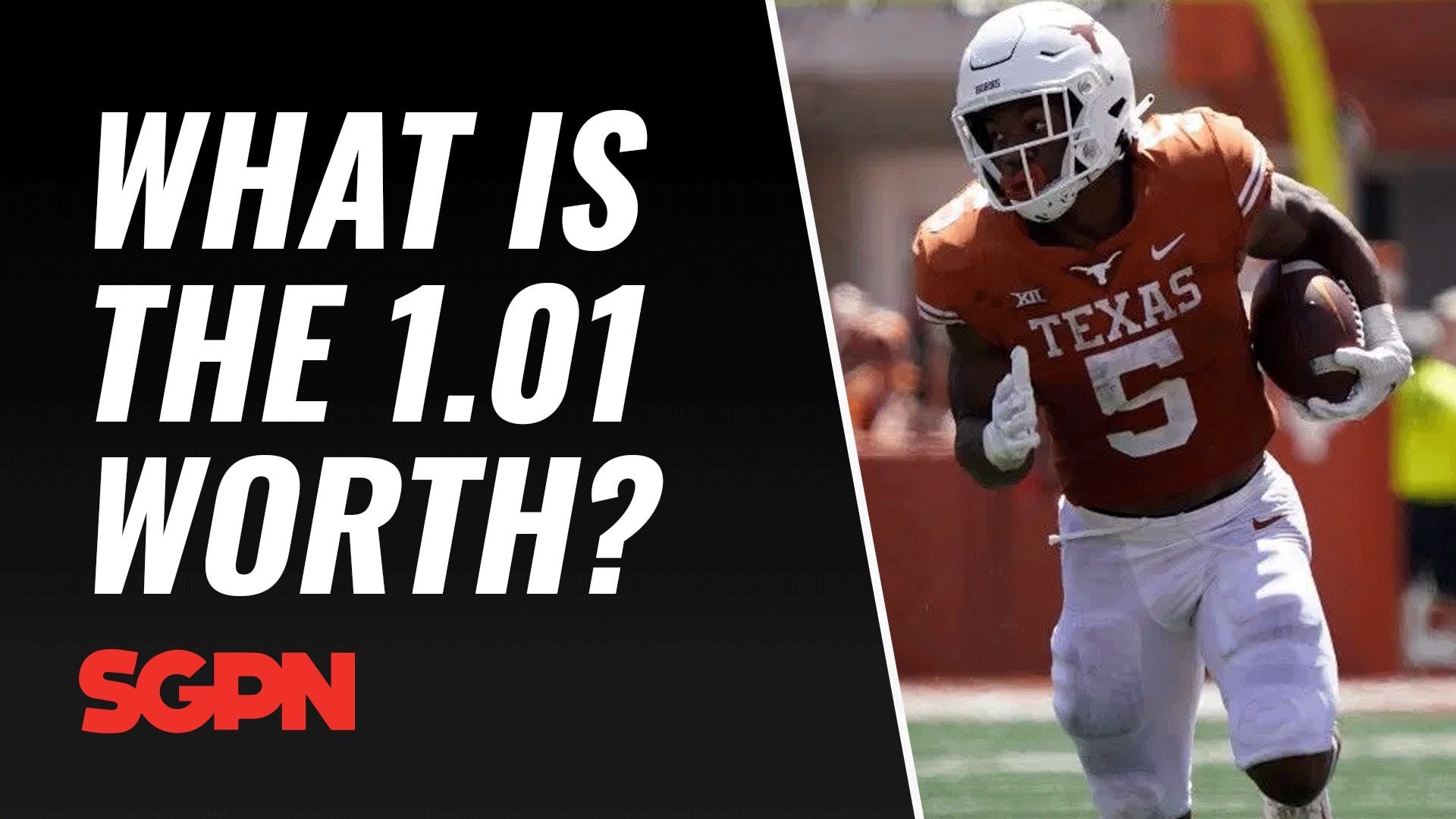 I get this question a lot, what would it take to trade the 1.01? My first response is always, do not trade your picks until the draft. The picks will only gain value significantly the 1.01. The offers will only get better, and a player can get worse. You do not want to trade the 1.01 for a player who gets hurt or suspended during the offseason.

Picks can’t get hurt, arrested, or suspended. Situations also change during free agency and the draft. So the first rule is not to trade the 1.01. That doesn’t mean you shouldn’t try to sell for it. If you do decide to trade the 1.01, these are some players that are in the ballpark.

Bijan Robinson is the clear-cut #1 in your single quarterback rookie drafts, someone I ran some polls on Twitter that received thousands of votes for players vs. 1.01 in Superflex. Here are the results.

You have the 1.01, What players would you trade it away for ?

Dynasty Football: What Players are Worth Pick 1.01?

Lamar Jackson broke out his sophomore season with a monster 415-point MVP season. Jackson’s 1206 yards on the ground and seven touchdowns would have put him in RB1 consideration. Jackson threw for 3,127 yards and 36 touchdowns that year. He was a league winner. Unfortunately, his points per game have fallen off each year since.

He is also a free agent in 2023. I expect him to return to the Ravens, and I do think the return of Rashod Bateman will really benefit him. Is Lamar Jackson worth the 1.01? In a vacuum, I do not think so. I wouldn’t trade the 1.01 for Jackson right now.

Fields has absolutely broken out this year and has been the QB4 overall since week 6. Justin Fields has already cracked 1,000 yards rushing this season. He has rushed for over 60 yards in 8 straight games, including 80+ rushing yards in 5 out of the last six games.

Fields has only thrown for over two touchdowns one time this year and over 200 yards 1 time. This is very similar to the Jalen Hurts 2021 season. The Bears will look to acquire some weapons to help support him in 2023.

Tua has broken out this season, and we have seen huge improvements. Earlier in the season, Tua was one of the top fantasy quarterbacks in the league. Tua had 4 top 4 quarterback finishes in the first eight games of the year.

This included a 66.86 performance that somehow was #2 on the week. He has cooled off quite a bit, and this offense, generally, has cooled off. Teams are playing the Dolphins differently, and Tua has not been a top-12 fantasy quarterback since Week 10.

Tua has been a solid QB2 with four performances in the QB13-QB18 range. Tua’s decline since his injury and since teams have adjusted to this offense are concerning. I like Tua, just need to be in love if I am going to ship off the 1.01.

I ran some polls on Twitter that received thousands of votes for Bijan vs. RB. Here are the results.

Who are you drafting first in a startup?

Bijan Robinson is very clearly seen as the most valuable dynasty RB right now. If you had the 1.01, you can trade that pick for any player you wanted. I would take the 1.01 over Saquon, Jonathan Taylor, and the other running backs.

Mainly because I know, I can take Bijan Robinson, and I have the most valuable asset. You could trade the 1.01 for any of these players, plus more right now. If you are a rebuilding team, you could turn this pick into a Mike Ditka-sized draft haul.

CeeDee Lamb is the WR6 this season. Lamb had not cracked the top 12 in his previous two seasons, and another Dak injury seemed to be another barrier. Lamb was able to play well with Cooper Rush, and he has had his best season yet. He has six top-12 performances and eight performances of being top 24 or better.

He has only had three games this year below ten fantasy points and is currently WR7 on the season. Who would you take first in a startup, Bijan or Ceedee?

Tyreek Hill has developed into one of the best wide receivers in the game. There was a lot of concern this season about how he would fit with this offense. The questions were more if Tua could support him as well as the support Waddle production.

There are questions about McDaniel and this offense. Tyreek Hill is the #2 overall WR this year and has maintained his dynasty value. Who would you draft first in a dynasty startup, Hill or Robinson? Hill will be a 29-year-old receiver next season, and that is why I would take Mr. Robinson.

Earlier in the year, we saw both Waddle and Hill absolutely lighting the NFL on fire. Tua has cooled off, and so has the rest of this offense. Jaylen Waddle has seen less consistent target volume.

Waddle has received seven or fewer targets in 10 out of the 14 games this season. During this span, he has had five targets in 50% of those games. Tyreek Hill is the alpha in this offense and has only had less than eight targets once in the last nine games. Only three times this season has Hill seen less than eight targets. Waddle is still a great dynasty asset, but he is not worthy of the 1.01.

Amon-Ra St. Brown has been one of the biggest rookie values of late. Last year he finished the season strong, and there were 900 excuses for why he crushed it. Amon-Ra has quieted many of his critics, but there are still some haters out there.

He is one of the best wide receivers in the game, and he is currently a top 7 Dynasty WR. But that doesn’t mean he is worth the 1.01. I would not trade the idea of getting Bijan Robinson for Amon-Ra.

I would not consider trading the 1.01 away for a tight end. Last year you may have seen trades like Kyle Pitts for the 1.01. Mark Andrews or Travis Kelce might have even gotten the 1.01.

I understand the premium that needs to be placed on tight ends, but this is too far for me. My #1 dynasty Tight End is Mark Andrews, and I would value him around 1.04 or 1.05.

It would take Mark Andrews + for me to consider moving the 1.01. I would draft Bijan ahead of him in a dynasty startup right now.