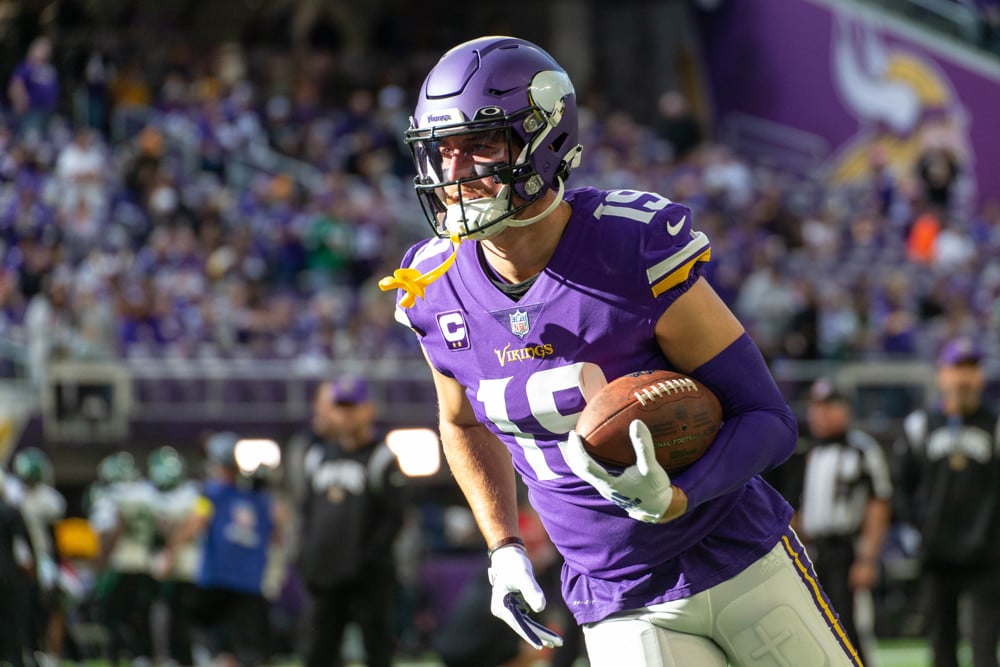 In this article I will feature positional values, stacking options, and games to target. Below each player are additional stacking options for that player, the defense they’re playing that week, as well as that defenses rank against the player’s position (fantasy points).

Thanks for checking out another SGPN Battle Royale article Week 16 edition. Good luck this weekend in your DFS slates and in your fantasy football playoff matchups.

I talk about it every week and the streak continues. Only one Battle Royale winner has managed to win without a top three Quarterback from that week in their lineup. We can eliminate most of the signal callers from consideration right off the bat as a result. Weather is going to play a huge factor this week as well which is going to cause me to limit my exposure to players like Joe Burrow, Josh Allen, and Justin Fields.

Patrick Mahomes has been outstanding this year ranking first in QBR and second in fantasy points per game among Quarterbacks. He is in one of the more exciting games of the week as well with one of the highest over/under totals on the main slate. Weather concerns in the other games puts him in a tier by himself this week, although it should be cold in Kansas City too.

Josh Allen has a couple of obstacles in his way this week the first being the weather. This game is projected to have the coldest game time temperature of any on the main slate this week with a -20 degree wind chill. The next problem is the game script. If Buffalo jumps out to an early lead, they could be willing to coast to a victory with their running game. Chicago will likely have to be more competitive than people think in order for Josh Allen to win players a Battle Royale.

Joe Burrow has been simply fabulous this season and it shouldn’t be a surprise as he is now fully healthy from ACL surgery two years ago. He is top 10 in virtually every accuracy metric and arguably has the best Wide Receiver duo in the NFL. Bill Belichick always presents a tough matchup, but the Patriots’ defense isn’t as formidable as in years past.

Justin Fields has finished as a top 8 QB each of the last eight weeks despite quite possibly having the worst receiver core in the league. He’s doing this because of his rushing ability as he has had over 80 rushing yards and a touchdown in six of those performances. He’s facing a tough defense and the weather is less than ideal, but his talent with his legs makes him weather proof.

Insert Quarterback playing against Kansas City. The Chiefs rank 29th in fantasy points given up to the Quarterback position and this game is supposed to be high scoring. After a bit of a midseason lull, Geno Smith has reminded us he’s still a great fantasy Quarterback in recent weeks. Finishing as the QB3 and QB7 in Weeks 13 and 14. The only concern is that Tyler Lockett will miss this game, but Marquise Goodwin should fill in admirably.

The Tight End Position in Battle Royales is very important like Quarterback. However, it is impossible to tell who will break out any given week given the volatility of the position. Among Battle Royale Winners, Tight Ends have been selected in the first round more than any other position (5). Travis Kelce and Mark Andrews make up all five of those occurrences, but it’s only happened twice since Week 3. More often than not since then, Battle Royale winners are finding breakouts deep in drafts.

There isn’t much to say here as Travis Kelce has finished as a top 5 Tight End all but two weeks this season. Like Mahomes, he is also in a class by himself as he is every week. A fun fact however is that Kelce has been on only two Battle Royale winning rosters this year. This has to do with his high ADP, so you’ll have to make up that value in other areas of the draft.

After fantasy managers were freaking out over his blocking role earlier in the year, George Kittle is all the way up to second in route participation. He’s going to be very boom and bust with Brock Purdy under center but that makes him perfect for these GPP tournaments. He will have a low ADP, but he has the potential to break the slate open with multiple touchdowns.

It has turned into a disappointing season for Mark Andrews who doesn’t have a top three finish since Week 6. This coincides with his drop in targets as he hasn’t finished in that range without 10 passing attempts going his direction. He’s seen seven targets over his last five games, which is great for a Tight End. However, the Baltimore offense is a mess and he hasn’t scored a touchdown since Week 6 either.

Going back to his time with the Detroit Lions, T.J. Hockenson has received 8.14 targets per game over the last seven weeks. The problem is he has only one touchdown since Week 4. The targets are there, which is all you can ask for from any Tight End at this point. He’s one of the best options based on volume and is in a good place to score against the Giants this week.

After a disappointing start to the season, Dalton Schultz has bounced back since Dak Prescott returned from injury. He has finished as a top 5 Tight End three of the last six weeks and is one of the seven or eight at the position you’re locking into lineups. Like any of these mid-tier TE1s though, the floor is low, but we’re here to take chances in these big tournaments.

Overall, 64.3% of Battle Royale winners have had two Running Backs in their lineup as opposed to three Wide Receivers. It’s hard to pin down an exact reason. An important factor is there are only 12 Running Backs drafted at most in a Battle Royale, with most having between seven and nine.

As a result, it’s very easy to pin down which Running Backs are going to produce as you don’t have to dig as deep as other DFS sites. Keeping that in mind here are some values later on in drafts that I think have elite upside.

Kenneth Walker is one of the classic injury discounts I highlight each week. He’s going in the last round of Battle Royale drafts after missing practice on both Tuesday and Wednesday. By the time you read this, you might already know the status of Walker and this section might be moot.

Having said that I don’t mind taking a shot on injury risks in the last round of Battle Royale drafts. It worked out well for Rhamondre Stevenson drafters last week.

This game features the lowest over/under I have ever seen and the lowest officially in nearly 15 years. It is no surprise that even in an outstanding matchup he is going in the ladder half of Week 16 Underdog Battle Royale drafts. He also hasn’t finished better than RB23 in six weeks, so the pessimistic forecast is justified. Having said that I’m always willing to take a chance in GPP tournaments where a great player can bounce back.

Nick Chubb is still one of the best pure rushers in the league, ranking first in breakaway runs and evaded tackles. He’s finished in RB3 territory four of the last five weeks though and is clearly not meshing yet in this new look Deshaun Watson led offense. As usual, he has no involvement in the passing game either with only a 6.7% target share. Despite all that, for the same reasons as Kamara, you take a chance on a great player in these tournaments at the discount.

Joe Mixon is being forgotten about after missing two games due to injury and two average performances upon his return. This is the same player that finished with 5 touchdowns not too long ago. There’s a chance that the Bengals jump out to an early lead and lean on Mixon in the run game as well. Talented Running Backs in the last round of Battle Royale drafts, rinse and repeat.

Rhamondre Stevenson being limited in practice is the only thing keeping his ADP this low. I expect him to play and he has been electric when he has been on the field this year. He’s been a top 15 Running Back 9 of the last 11 weeks of the season and is fourth among backs in target share. He’s a good bet to go off any given week and is the only Patriots player I’m considering drafting in Battle Royales this week.

Just like every other position in the Battle Royale, we are looking for top 5 upside from the players that we draft. The majority of Battle Royale winners have had two top 5 Wide Receivers in their lineup and I don’t expect that to change this week.

Juju Smith-Schuster was beginning to hit his stride midseason, but he left Week 10 with a concussion and missed the following game. It took him a couple of games to regain his form but he’s back now accumulating 21 targets over the last two weeks. He has 162 yards over that span as well and is the only fantasy-viable Wide Receiver on the Kansas City offense.

Amari Cooper is like George Kittle in that he is the perfect large tournament Wide Receiver. He has five 20 point performances this season but the down weeks keep his price down. Despite not getting on the same page as Watson yet, he has received 9, 7, and 6 targets in the last three weeks respectively. The game is projected to be rough but I’m willing to take a chance Cooper scores a long touchdown.

Despite a lack of accolades, Terry Mclaurin is 8th in receiving yards and 7th in unrealized air yards this season. He has a 23.1% target share as well but he hasn’t been able to find consistent fantasy production. This is because of the Quarterback situation and them not being able to find consistent success. San Fransisco has a good defense but they aren’t particularly tough against opposing teams’ Wide Receivers. Mclaurin is a great pick late in drafts in the chance Heinicke can connect with him on a deep ball.

After being referred to as “dusty” by every fantasy football podcast under the sun, Adam Thielen has come alive recently. He’s finished as a WR1 in two of the last four weeks and has a touchdown in three of those games. As usual, he’s a big-time target near the endzone as well ranking 6th among receivers in red zone targets. With so many games experiencing bad weather, this is a game I want to target.

While correlation isn’t as important with these smaller lineups as other DFS sites, it is still something the majority of Battle Royale winners have incorporated. In all, 85.7% of Battle Royale winners used some kind of stack in their lineup, most involving a Quarterback with one of his receiving weapons. Additionally, 57.1% of winners incorporated a “bring back” with two players on opposing teams in their lineup.