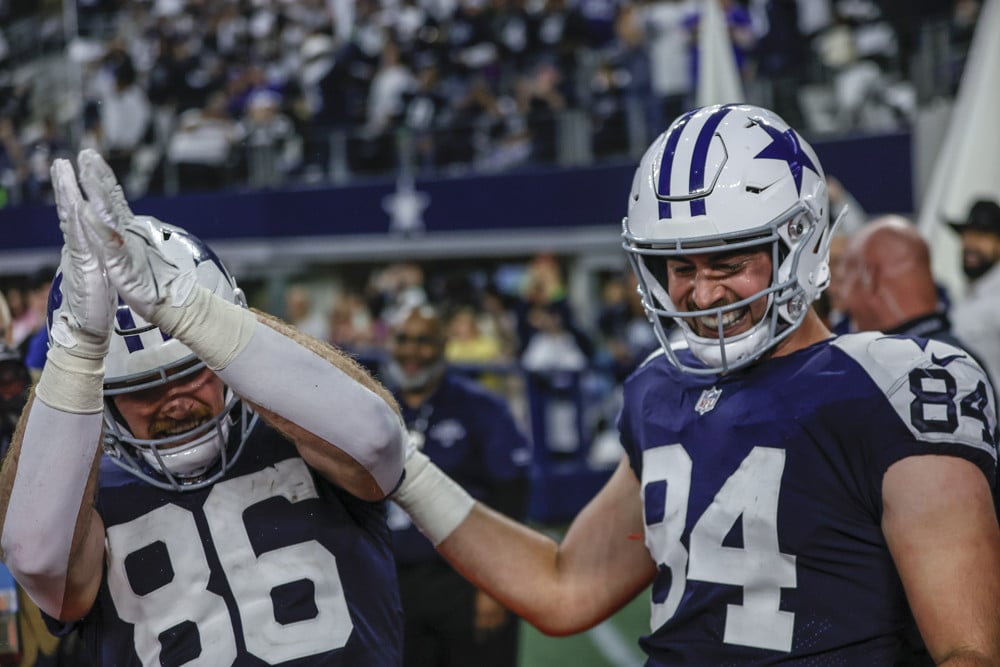 As opposed to other DFS sites that base lineups around a salary cap, Underdog uses drafts for larger entry fields and each person is divided into a six-person draft. When the draft concludes your team is submitted into a 45,324-person field. This is different than other DFS sites as you’re at the mercy of other drafters. Who you have on your team will be based on who other fantasy managers draft, which is why I recommend submitting multiple entries to get that optimal lineup.

In this article I will feature positional values, stacking options, and games to target. Below each player are additional stacking options for that player, the defense they’re playing that week, as well as that defenses rank against the players position (fantasy points).

This week I also researched Battle Royale winning rosters, where they drafted particular players, and whether they were selected higher or lower than ADP. My goal in doing this was to find out if Battle Royale winners were simply getting lucky and taking players unnecessarily falling down the board.

Thanks for checking out another SGPN Battle Royale article Week 15 edition. Good luck this weekend in your DFS slates and in your fantasy football playoff matchups.

Each week I begin with Quarterback tiers because it is the most important position in the Underdog Battle Royale. Every single Battle Royale winner besides one has had a top three Quarterback in their lineup from that particular week. With the lineups being smaller than most other DFS sites, the Quarterback position makes up a bigger percentage of the total points.

Jalen Hurts has been fantastic this season and was on the Battle Royale winning roster in Week 14. He has seven top 3 Quarterback finishes which is the exact outcome we are looking for in our Quarterback. Stacking is preferred with AJ Brown or Devonta Smith, but not necessary, as he’s finished four out of the last five games with a rushing touchdown.

In a tough matchup last week, Patrick Mahomes was still the QB6 in fantasy even with three interceptions. He’s first in passing yards and passing touchdowns so there isn’t to much to think about here. Houston has a respectable pass defense. However, there ranking of 2nd is inflated by them having such a poor run defense and other teams nursing large leads.

Justin Herbert has finally found his groove finishing as a top 10 Quarterback four straight weeks. He couldn’t be in a better matchup either as you can see by Tennessee’s 31st ranked defense against fantasy Quarterbacks. He’s first in money throws and pressurized throws as well according to PlayerProfiler so he’s still clearly a top tier Quarterback.

Justin Fields is on an incredible streak with over 60 rushing yards in seven straight games. Over that span he’s finished as a top five Quarterback five times and has been on two Battle Royale winning rosters. There is concern without Darnell Mooney, but his passing isn’t why we love Fields in fantasy. Look for Fields to continue to produce as a runner with multiple touchdown upside.

After finishing in the bottom 10 in pass plays per game, the Bengals rank 7th this season which has been great for Joe Burrow’s fantasy production. The Tampa Bay defense is stout, but Brock Purdy did score 25 fantasy points against them last week. If Tee Higgins is healthy, he’s as good an option as anyone in this tier.

Tight End also has an elevated level of importance in the Battle Royale due to the smaller lineups. Nearly every Battle Royale winner has also had a top three Tight End in their lineup, but that trend has faded a bit these last couple of weeks. Regardless, we are also looking for Tight Ends with a top three positional finish in their range of outcomes, and as a result, can eliminate most from consideration.

Travis Kelce is number one in nearly every Tight End category and has been in two Battle Royale winning lineups this year. He’s the clear top Tight End as is going as the second pick in Underdog drafts this week. It should be noted however that he has finished as the TE14 and TE9 the last two weeks. A small blip on what has otherwise been an outstanding season.

Dalton Schultz has gotten back on track with a healthy Dak Prescott and is my second ranked option in this slate of games. He received 10 targets last week as well and has finished as a top 5 Tight End in three of his last five games.

Pat Freiermuth is getting it done differently than most Tight Ends as he has only two touchdowns this season. He’s been getting a big workload though and is one of the few Tight Ends in the NFL with consistent target volume. He’s fourth in air yards too so he’s always a solid play any given week.

Evan Engram was obviously on the Battle Royale winning roster last week with 11 receptions for 162 yards and 2 touchdowns. You didn’t stand a chance last weekend without him in your lineup but he’s in a tough matchup this weekend. His performance will likely depend on Trevor Lawrence’s ability to overcome a tough Dallas pass rush.

Although I found that most Battle Royale winners weren’t getting overly lucky in drafts, nine winners did select a player that fell over a round below ADP (6 picks). The highest percentage of these picks did come from the Running Back position. The important note here being that if a Running Back is available that’s fallen significantly below ADP you should take him. Not only because of the value, but because it creates a unique lineup that not many people will have.

Obviously, the top Running Backs all have the upside we are looking for but here are four Running Backs deeper in drafts who could finish in the top 5 this week.

James Conner is really coming on in the ladder half of this season with a 90+% snap share in three of four games. He’s in a true workhorse role right now and also has been clearing a 75% route run rate. This shouldn’t change with Colt McCoy under center, and the workload will overshadow a tough matchup.

Zonovan Knight is another player in a bellcow role right now with 17, 20, and 19 oppurtunites the last three weeks. Over that span he has 298 yards, but Mike White missing the game is concerning. Detroit has been surprisingly good against the run as well so Knight’s prospects aren’t looking as good as they were earlier in the week.

Ezekiel Elliot has been one of the most consistent fantasy Running Backs this season as the Cowboys rank 7th in rush plays. This is despite hovering around a 50% snap share in recent weeks, which is certainly helped by the fact he has 9 rushing touchdowns.

Insert Running Back playing against the Houston rush defense. If Kansas City gets off to an early lead, they could lean on Isiah Pacheco to nurse it. He has also finished with over 80 all purpose yards in five straight games so he could be coming on at the right time.

Once again you guessed it, the bulk of Battle Royale winners have not only had one top 5 Wide Receiver in their lineup, but over 70% have had two. With only 6 players in each lineup, we are essentially trying to be perfect. We are at the mercy of who’s available in drafts but we can do things to give us an advantage.

As I stated previously, the bulk of Battle Royale winners draft only two Wide Receivers and I gear most of my lineups this way as well. Additionally, Wide Receiver tends to be the weakest position besides Tight End at the end of drafts so I like to have my two receivers before the final round.

Just like Running Back, the Wide Receivers at the top of the board have obvious upside. These are additional receivers later in drafts who have top five upside if the cards fall right.

After finishing as a WR1 three straight weeks, Juju Smith-Schuster suffered a concussion, had a couple of poor performances, and there was a bye week sandwiched inbetween. He appeared to get back on track last week and is the only consistent player available in drafts to stack with Patrick Mahomes.

Despite getting grief for his contract, Christian Kirk has been very good as the top receiver for the Jaguars. He is 13th in fantasy points per game and 4th in redzone targets. His 23.8% target share locks him into a safe role anytime Trevor Lawrence is productive.

I highlight an injury discount every week, and that will be Tee Higgins this week. He has a lot of concerns, but that is baked into his 6th round price. I’m not getting too much exposure this week, but I am making sure I snag him in a couple of drafts.

Chris Godwin ranks 10 in targets on the year despite missing four games essentially due to injury. However, the Tampa Bay offense has been a mess this year and Godwin has just two touchdowns. Like I said on the Battle Royale podcast this week though, I’m willing to take a lottery ticket out every week that Tom Brady figures it out.

While stacking and correlating aren’t as important here as other DFS sites, it’s still a big part of winning. The majority of Battle Royale winners this season have stacked a Quarterback with one of his receiving options. Additionally, over half involve a “bring back” of some kind with two players on opposing teams in the same game. Reach if you have to a bit in order to complete a stack, but it’s less necessary with rushing Quarterbacks like Justin Fields or Jalen Hurts.

These games below are ones that have some exciting fantasy options given the game scripts. There are players on both sides of these games to target and would be great games to get 3+ players from in your lineup.

Thanks for checking out another Week 15 Underdog Battle Royale article. Be sure to check SGPN back daily for more fantasy football content.