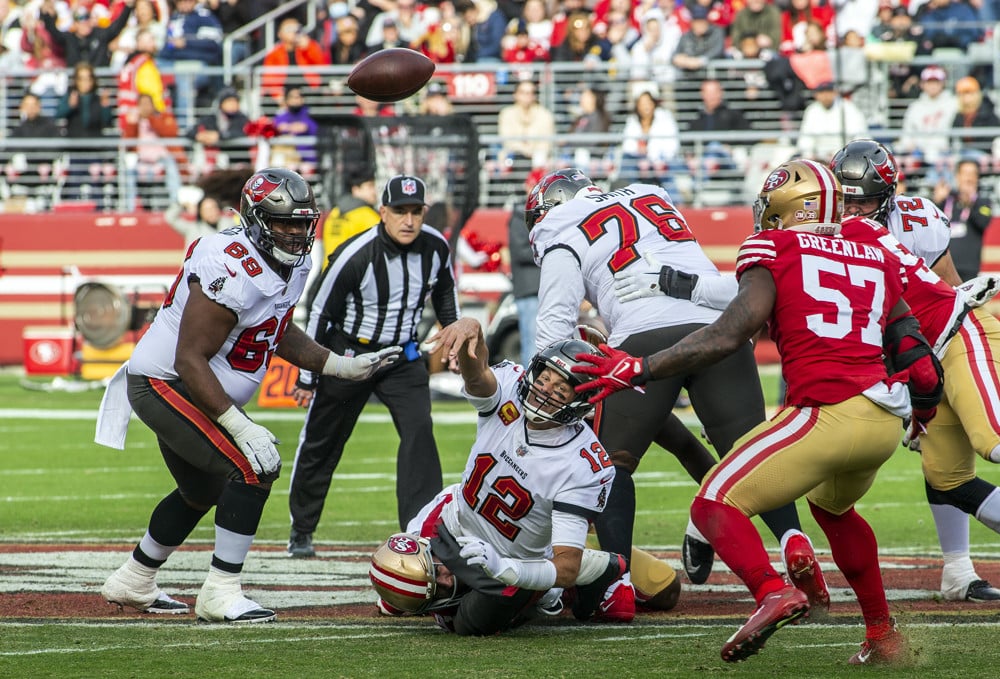 It’s that time of year when everyone’s looking for that injury or deep second or third-tier sleeper. But the real trick to getting “lucky” in standard IDP league formats.

Know your lower-tiered NFL IDP’s matchups. Because lord knows managers aren’t all up to trading right now, and we already saw the week 15 IDP playoff waiver wires started looking a little bare a few weeks ago.

At least with NFL defensive players that are known to overachieve at any time. And also have a floor that guarantees you won’t take a zero in the box score. So the following are the best overall less used IDPs we located and ranked. And are a bit under-managed by their current roasted numbers in many standard formats.

Dre Greenlaw is our first option with our best NFL matchup for an inside linebacker that may be available in your league. In theory, he’s far from the team’s leading linebacker, Fred Warner. But in the last three games, after a mid-season slump. Things have taken a turn recently.

Greenlaw has averaged around 95% of the snaps, and 9.5 total tackles, with nearly all of them being solos in the process. Also, dotting the landscape with pure big splash plays. Like forced fumbles and passes defended that padded his box score.

So after a period where he may have dropped, he’s now a great IDP option with a hot NFL matchup with the Seahawks. Who has also allowed the most points in the league over the last three weeks to the position? At least according to our latest information.

And it doesn’t hurt to look back in this case at Dre Greenlaw’s week two production, either. Because when they meet then, he mirrored his projection for this contest by the numbers. With eight combined tackles, who knows, maybe he’ll continue his streak of being in the right place at the right time. And with any luck, record another big splash play or turnover this contest making it 4 in a row.

Actually considered the best inside linebacker option in Miami. Jerome Baker has a fell way off this year when it comes to NFL matchups. But there again, recently, he’s like Greenlaw. Picking up the pace and stringing a few good games in a row.

His last three contests he’s played have consisted of fairly consistent snaps with an about 75% on average. Which overall is a slight uptick this year. But more importantly, he’s doing something with the playing time. Also, recording, on average, just under 8.5 total tackles a game. And added, out of the blue, 2.5 sacks as a bonus. This is also encouraging going forward. But that’s if they keep giving him those tackle-for-a-loss opportunities.

The matchup this week with the Chargers is nothing more than a lock. He will hit his league average. And perhaps his best contest yet. The Charger’s game plan has shifted a bit recently, with Kennaan Allen returning and working the slot like a pro.

They are averaging giving up nine total tackles to their last three opponents’ ILB. And explains why they are now sitting in the top 10 in NFL matchups in points allowed to the position. And why Jerome Baker slides in second for the linebackers to reach for in this week’s 15 IDP Footnotes.

Coming off a poor NFL matchup versus the Vikings may look deceiving, so keep this in mind with the Jet’s Quincy Williams. He is also the last of the five linebackers listed as options that have been an IDP gem just as recently as last year.

But this year has been different, with Kwon Alexander signing on. And an early injury that stifled his consistency. Hence he’s here now making this list.

Looking at his numbers from the last three weeks, not so hot. But as we mentioned, his last contest was gross by the numbers. Because, believe it or not, the Viking’s run game might be sweet. But that’s because they are good at blocking the second level.

So recapping his recently down numbers might not come into play here as an example.

But those snaps have increased as he’s gotten healthy this later half of the regular season. And with that, based on Williams’s history as a player, the IDP production will follow. And the odds are strong that Quincy Williams get back to his tier 1 ceiling of at least seven combined tackles this contest.

At least as a deep-reach NFL matchup sleeper. And especially after seeing in week 3, he recorded 13 total tackles in their first matchup versus the Bills.

This one might seem like it’s too much of a reach. But on paper, The Viking free safety Camryn Bynum has lived up to 90% of his favorable matchups. So coming from a nice matchup in week 13, that didn’t pan out for him in stats. He’s still making this list when his opponent is the Colts. And they’ve been top 5 all year, allowing production to the opposing team’s safeties.

So this is another guy whose recent stats aren’t going to help us much with a poor week 13 outlier performance. So let’s look at the Colts before their week 14 bye and those prior three weeks of production allowed to safeties, which were 50 combined tackles between the Cowboys, Eagles, and Steelers, with 16.6 total tackles given up on average in each contest to each team’s tandem.

And with each of those teams, the deeper free safeties had very productive games with an average of 9.6 combined, which is Camryn Bynum’s sweet spot on the field. So hitting the highest total tackle ceiling, he’s had this year in production is actually at stake in week 15 IDP leagues.

So we’re setting that week 15 ceiling at 11 total tackles. And that’s what 2 of the last three free safeties have recorded, which included the Eagle’s Chauncey Gardner-Johnson and Dallas’s Donovon Wilson’s numbers. And his floor is what Steeler’s Minkah Fitzpatrick recorded, and that’s 7.

Another team always allows great production to the safeties is the Cowboys. And the Jaguar’s free safety Rayshawn Jenkins has them up next, and he’s also been known to live up to expectations of performing this season. And so much so that at the beginning of the NFL season, he was a serious top-10 safety option at times.

So we expect that to be the case again in this contest. And the Cowboys control the line of scrimmage and tempo. And RayShawn Jenkins absorbs that production that’s forced beyond the front 7. Also, mentioning any stat or data, Jenkins isn’t “killing it” anymore like he was at the beginning.

But that can also be attributed to poorer matchups along the way to get to this moment. And not to list every contest, on the season, he’s pretty well overachieved in, which is quite a few too. He hasn’t taken a complete hit in the box score yet.

And to note that besides week one versus the Commanders. Rayshawn Jenkins hasn’t recorded less than five combined tackles per contest all year.

Rayshawn Jenkins is a missile… pic.twitter.com/Z3sMa1MHCL

The Giants have dropped recently in allowing production to the safeties; that’s true. And that includes when they played Darrick Forrest and the Commanders as recently as week 13. But don’t let that fool you in this divisional contest in New York this time.

Because the Commander’s third safety Forrest has a prominent IDP role in this defense, and that fact alone favors he records more than the five combined he recorded the first time they meet.

And negates the fact a bit the Giants are now a middling team in the league at allowing points to the safeties. So this might sound like a “catch-22”, but it isn’t.

If we can suggest one DT to go get that might be out there, it’s Sheldon Rankins for the next three weeks, actually. So versus the Lions is just the beginning, as we figure he’ll take advantage of their top 15 ranking in interior DL production. And this comes with or without Quinnen Williams (Q) playing clear thru week 17.

Sheldon Rankins spoke with @JeaneCoakley after today's game about Quinnen Williams being taken out of the game due to injury, how the team has no quit, and what the veterans say to the younger guys during a playoff hunt pic.twitter.com/7FhcY50bQV

A highly regarded NFL talent. The Viking’s defensive tackle Dalvin Tomlinson has returned recently. And made a strong mark that he’s primed and ready for this top-10 interior matchup versus the Colts in week 15. And with little to work with to convince managers that this is a great play if need be.

The team made way below-average Dallas defense tackles look like All-Stars. Relinquishing ten total tackles, a sack, and a tackle for loss.

The Rams rookie Michael Hoecht might be a bit iffy in more than just trusting him. The Aaron Donald replacement has had a very small sample to impress. But that’s fine because impressed. He has, for sure. And that’s going to roll over into this top-15 matchup after he overachieved in week 13 versus the Raiders.

Which was proceeded by his starting debut versus the Seahawks. And helps calm our nerves a little if we need to reach for an on-par player that’s overachieving altogether.

It’s pretty vanilla with the Saints David Onyemata. He gets what the matchup offers, and that’s it. So if you’re looking for a solid option that makes sure you don’t take a hit when you’re looking for a flier. This might be our best option for taking on the top 12 Falcons in week 15 IDP leagues.

A trusted veteran taking on the Baltimore Ravens and was left out in the cold the first time they meet this season. Has way more appeal if looking hard at the waiver wire for a solid contributor with history. And with a great week 15 IDP matchup on paper, that might not have worked into the Browns’ Jadeveon Clowney game plan the first time.

But keep in mind that contest. The numbers allowed two unknown defensive ends great outlier performances by deep-depth guys, which supports that the production idea was there. He just didn’t happen to get his share this time.

Another great veteran to throw into our conversation for week 15 IDP leagues. The Raider’s Chandler Jones recently lived up to expectations and finally got in the backfields of opponents. Recording an astonishing four sacks in the last two contests.

Which also seems to be the highlight of his season so far. So this former top 3 edge rusher has a second wind we can ride if we’re digging deep versus the Patriots. And they’ve been an off-and-on again top 10 option all season, allowing production off the edge.

Our least favorite to trust, but still worthy enough for those really desperate. The Chiefs Frank Clark still needs to be considered when he’s playing the Texans. Houstons has been terrible upfront. Allowing all kinds of IDP production with that struggling offensive line.

They’ve also been the cream of the crop this year to pick on when looking for an advantage for a player like Clark. And that’s not as solid in consistency. But would be better than just flipping a coin when you’re needing a deep tier-one matchup Hail Mary. At least if you’re looking for a known veteran that does produce when the matchups are this hot in week 15 IDP leagues.