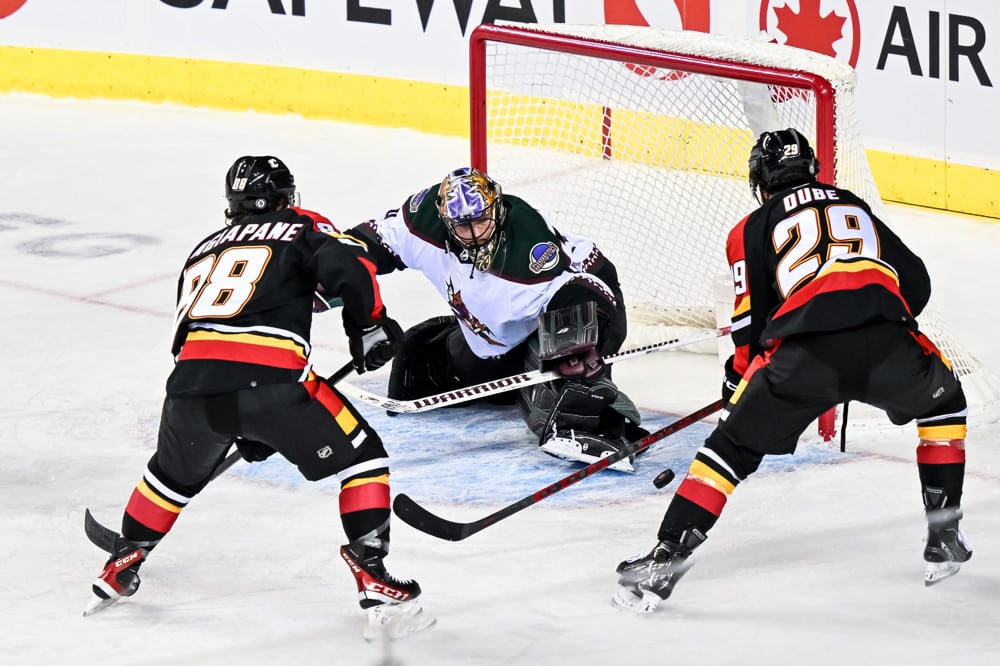 Can you believe it’s already the middle of December and we’re into Week 10 of the Fantasy Hockey season? Me either! Welcome back to our fantasy hockey waiver wire, teams to stream, schedule, and best pickups article for this week!

After a more-balanced schedule last week, the NHL reverts to its usual slate this week with double-digit games on Tuesday, Thursday, and Saturday, with Monday (6), Wednesday (3), Friday (3), and Sunday (5) being the lighter nights this week. Those are the four nights we’ll be looking to target to get those extra stats this week!

We’re going back to our normal format of highlighting the teams playing most on those lighter nights this week.

The Calgary Flames and Minnesota Wild both play on all four lighter nights this week. The Ottawa Senators also play four times total and thrice on lighter nights.

There are already seven Flames players rostered in over half of leagues but there are a few worth looking at.

Mangiapane enjoyed a breakout campaign last season with career-highs in goals (35), assists (20), and points (50) — by far. He had 64 points in 124 games across the previous two seasons.

We’re seeing some of that regression this season with Mangiapane but he still plays on the second line (with Nazem Kadri) and power-play unit. He has six points in his last seven games with those points coming in three separate two-point games. Perhaps he gets another multipoint night or two this week?

If Mangiapane is rostered in your league, you could take a look at Dube. Dube plays on the second line as well with Kadri and Mangiapane and has enjoyed a bit of a resurgence recently. After zero points in 11 games from October 29th to November 19th, Dube has eight points (4 G, 4 A) in his last 11 games, including six points in his last seven games.

I’m waiving the “less than 50% rostered” requirement for Hanifin just to throw a defenseman out there.

Hanifin is red-hot after a two-goal game against the Maple Leafs. He can put up points in bunches as shown by his 10-points in 13 games from November 5th to the 29th. If he’s available in your league it’s worth picking him up for this four-game week. As stated by Realcasinoscanada it’s the best time to decide on a bet. Most gaming platforms in Canada enable sports betting, including casino platforms.

The Wild have three top players rostered in over three-quarters of leagues and then a bunch of floaters.

Steel is currently seeing ice time on the top line with Kirill Kaprizov and Mats Zuccarello — the Wild’s two best players. He took advantage of that on Saturday night with a goal in Vancouver, although he hasn’t shown much of that this season.

The 2016 first-round pick has five points (4 G) in his last 10 games. He’s not going to light the world on fire; this is more of a deep-league look given his usage.

Addison was recently a healthy scratch due to his lack of defense, but offense is what we’re typically looking for in fantasy hockey and he’s put up plenty of that. He has 15 points in 26 games this season, including seven points in his last eight games.

When he’s in the lineup he sees some time on the top power-play unit so this could be a high-upside pickup in deeper leagues.

The Senators are another very top-heavy team with four players rostered in over 90% of leagues, another two between 75% and 83%, then a bunch well below 50%.

Pinto has had some ups and downs in his rookie season. Well, he started out hot and has pretty much gone downhill since. Nevertheless, he had two assists on Saturday night and is playing on the second line with Alex DeBrincat and Drake Batherson — rostered in 94% and 75% of leagues, respectively.

The young center has what it takes to put up points as shown by his five-game goal streak early in the season. There aren’t many Senators outside of their top five or six guys worth rostering, but Pinto deserves a mention.

Sanderson was in the spotlight during Chabot’s absence, so he won’t near that level of production again unless the top-pair guy goes down again, but he’s worth looking at.

He only has two points (both assists) in eight games since Chabot returned. however, he’s been contributing with some hits, blocks, and shots on goal to help out.