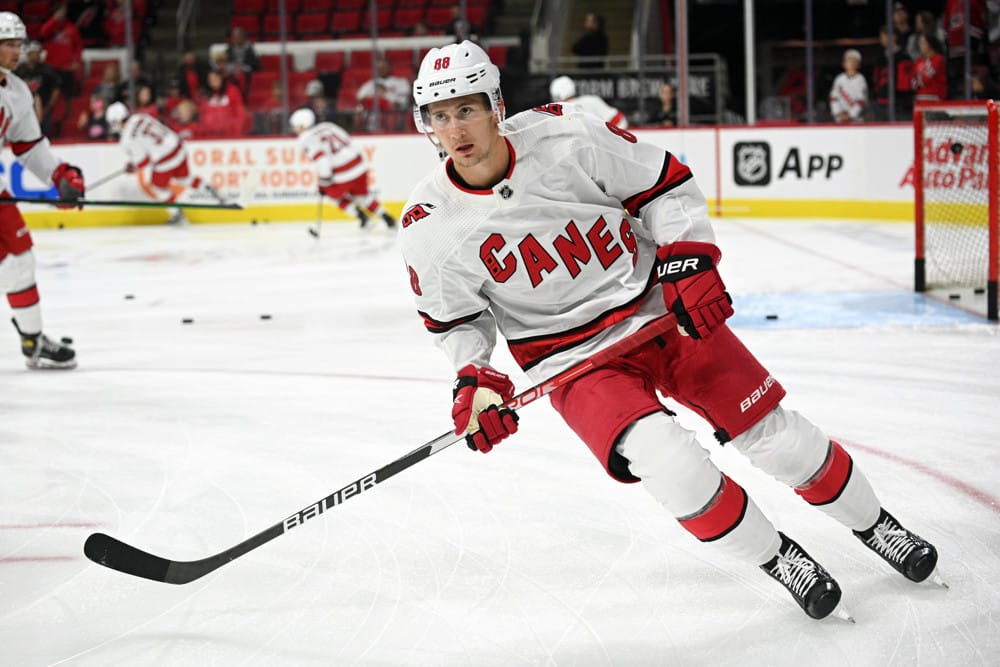 The NHL season is entering its second month this week and the fantasy hockey season is rolling. Hopefully you’ve been able to win a few of your matchups through the first three weeks, and we’re back again with the teams to stream and best pickups in fantasy hockey for this week!

Week 4 is your prototypical NHL and fantasy hockey schedule. The heavy nights this week are Tuesday (12), Thursday (13), and Saturday (14).  The lighter nights are Monday (3), Wednesday (2), Friday (2), and Sunday (3). Picking up players to get some extra games in on those nights could be the difference in you winning and losing your matchup.

Only seven teams play four times this week. Of those seven, there are only two teams that play on three of the lighter nights. Those teams are the Buffalo Sabres and the Carolina Hurricanes. The Detroit Red Wings are another viable option with four games (two on lighter nights) this week.

The Sabres have a few players that should be rostered in almost all leagues, namely Rasmus Dahlin (99% rostered) and Alex Tuch (75% rostered). Owen Power (67%), and Tage Thompson (65%) are up there as well, although Power hasn’t shown much yet.

Skinner isn’t my top recommendation on the Sabres, but we go from highest to lowest rostered in this article. The veteran winger only has one goal and four assists so far this season, but he has the skills and opportunity to put up shots and points.

Skinner plays on the top line and top power-play unit. He has three points (G, 2 A) and seven shots in his last two games, so perhaps that’s a sign of things to come.

Olofsson is the guy I would target for this week. While he doesn’t get the same deployment as Skinner, Olofsson has been putting up points this season.

The winger plays on the second line and power-play unit. He’s scored six goals (including two in his last game) and added an assist so far this season. Olofsson totalled 10 shots in his last two games as well.

Anderson is getting up there in age but that hasn’t shown so far this season. The veteran netminder is 3-0-0 with just five goals allowed in his three starts. Granted, those were against Ottawa, Vancouver, and Chicago, but saves are saves and wins are wins. He’ll have a tougher time this week with Detroit, Pittsburgh, and one of Carolina or Tampa Bay, but he could still steal a win or two.

The Hurricanes’ stars are rostered in 83%+ of leagues, but one youngster needs to be picked up in almost all formats.

Necas barely makes the cut at just under 50% rostered, and it’s shocking that it’s still that low.

Necas is tied for the 11th-most points in the entire league with 11 (5 G, 6 A) through Saturday’s action. Those five goals are tied for 18th-most and his six assists are t-25th.

The youngster has a point in all but one of the Hurricanes’ games this season and that should continue this week against a few lesser teams. He plays with Andrei Svechnikov and Jesperi Kotkaniemi on the second line, and plays on the top power-play unit as well.

Go pick up Necas if he’s available in your league.

Brent Burns (95% Rostered) has taken over as the Hurricanes’ power-play quarterback, but Slavin and Skjei are still solid options. Slavin only has two assists with 21 shots and 14 blocks this season while playing on the top pair.

I’d go with Skjei for now as he has five points (G, 4 A) and 19 shots with seven blocks. Both are solid options for this week.

With a back-to-back later this week, Raanta should get the nod against the Buffalo Sabres — a team that the Hurricanes should beat. Raanta is 2-1 so far this season with the lone loss coming against Calgary.

The Red Wings are a bit top-heavy so it’s slim pickings on the fantasy side of things. Moritz Seider and Dylan Larkin should be rostered in all formats, as should Dominik Kubalik (71% Rostered) and less so David Perron (68%). Lucas Raymond (56%) has upside and is who I’d look to if he’s available. Otherwise, take a flier on…

Copp hasn’t done much this season with just two assists and nine shots on goal. However, he has center and winger eligibility and could vulture some points on the second line and power-play unit.

The former Jet and Ranger compiled 53 points in 72 games total last season, so he should pick it up at some point.

Hronek plays on the power play but has yet to do too much. He has five assists and 14 shots on the season. Still, the second-pair defenseman plays in all situations and is averaging well over 20 minutes a night.