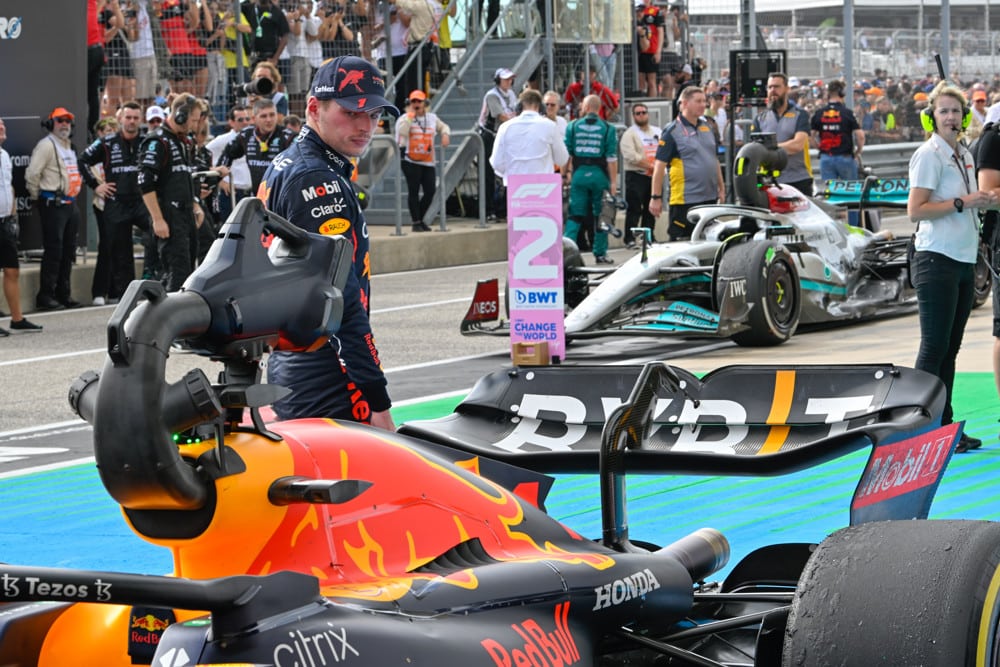 Staying in North America, the teams head to Mexico City and Autódromo Hermanos Rodríguez. The 2.674-mile race track will host the Mexican Grand Prix this weekend. Max Verstappen has wrapped up the driver’s title, Red Bull Racing has wrapped up the constructors’ title. Now Verstappen is chasing win number 14, which would put him alone atop the record books for wins in a single season. Get ready for more fast paced action with these Mexican Grand Prix DFS plays.

The start from Carlos Sainz’ perspective…

Max Verstappen tied Michael Schumacher and Sebastian Vettel for most wins in a season at 13 last week at the United States Grand Prix. Despite this being Verstappen’s 13th win in 19 rounds in 2022, it didn’t come easily. Max got the early jump as pole-sitter Carlos Sainz was spun by George Russell. It looked like Max would just run away at this point. However, a lengthy pit stop would cost the team dearly late in the race. Verstappen fought his way back to the front passing Lewis Hamilton with just six laps remaining to claim the victory.

It’s been the season of Verstappen all season long. There is little reason to believe that will change this weekend. Max averages almost 10-points more than the next closest competitor. 40-laps led at the US Grand Prix, 27 at the Japanese Grand Prix, and 58 at the Dutch Grand Prix all blowing his competition out of the water.

This week, Perez is the home driver as the 32-year-old Red Bull driver hails from Guadalajara, Jalisco, Mexico. The native Mexican finished 3rd in last year’s event and has had solid runs week in and week out. Red Bull is head and shoulders above the competition right now. Even when Max doesn’t win, Checo has proven he can do it, taking the victory three races ago at the Singapore Grand Prix.

After getting the big dogs, it’s time to go bargain bin shopping for your next Mexican Grand Prix DFS pick. That doesn’t mean you have to just grab the cheapest option on the board though. Zhou has been performing at a steady pace as of late. He got you 9.0 fantasy points last week at the US GP, and 4.0 the race before in Japan. Singapore didn’t go his way, but Zhou scored no less than 6.0 points in the four events before Japan.

After loading up on the two Red Bulls already, Mercedes offers us one of the “big 3” constructors who have righted the ship after a few down races. Lewis Hamilton was so close to the win last week, and at the Mexican GP, Mercedes showed up with speed last year. Valtteri Bottas took FP-1 and was the fastest qualifier. Lewis Hamilton then grabbed a podium finish coming home in second.