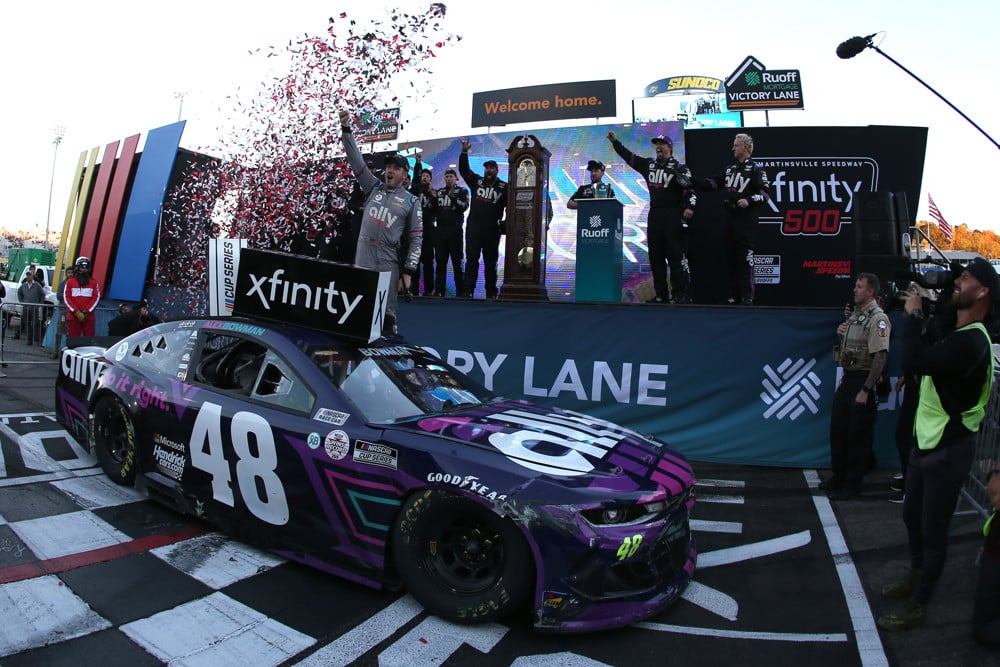 The final playoff race before the Championship Race in Phoenix takes place this weekend as you set your NASCAR DFS lineups for the Xfinity 500 at Martinsville Speedway. This half-mile asphalt and concrete track, more affectionately known as “The Paperclip”, challenges a driver’s skill and patience. Martinsville Speedway has hosted NASCAR Cup Series races since 1948 and “The King” Richard Petty holds the record for most wins the half mile in Ridgeway, Virginia. The driver who is currently active with the most wins at Vegas: Denny Hamlin with five trips to victory lane.

This week’s NASCAR DFS slate provides some difficult decisions for owners. Which Chevrolets do you play at Martinsville? Can the Toyotas show their power on the short tracks again? Are the Ford’s worth their salaries or should you stay away all?

The first driver to pay up for this weekend at Martinsville is Denny Hamlin. Martinsville has been Denny’s playground in his career. In 33 races, he has five wins, 16 top 5s, and 22 top 10s. The driver of the #11 Toyota also boasts the 2nd best career average finish at “The Paperclip” amongst active drivers at 10.7. Uncharacteristically, Denny finished 28th in the Martinsville race earlier this season. In the four short track races this season, Hamlin has a win, two top 5s and three top 10s. His 10.5 average finish on those short tracks is sixth best amongst active drivers. I see Denny Hamlin bouncing back this weekend at Martinsville and therefore, he should be a driver you pay up for.

Chase Elliott is the next Cup Series driver you should pay up for in the Xfinity 500. In 14 races at Martinsville, Elliott has one win, five top 5s, and eight top 10s. Earlier this season at “The Paperclip”, the driver of the #9 Chevrolet finished 10th, but led a race best 185 laps. Amongst the four short track races in 2022, Elliott has two top 5s and three top 10s. Even more incredible, Elliott has an average finish of 7.8 in those four races, which is the 3rd best average finish. Chase Elliott won the Martinsville cutoff race a couple years ago to make it to the Championship Race, so he knows this pressure. Chase Elliott should definitely be a driver you pay up for at Martinsville this weekend.

This one may be a surprise, but Ryan Blaney should be a driver you pay up for at Martinsville. Although he has never won at Martinsville, Blaney has recorded six top 5s and seven top 10s in his 13 races at the track. In those 13 races, Blaney has the best average finish of any Cup Series driver at 10.2. In the last trip to Martinsville, the driver of the #12 Ford finished fourth and even led a handful of laps. Out of the four short track races this season, Blaney has one top five and three top 10s. Blaney has his back against the wall when it comes to advancing to Phoenix next weekend, so I expect him to come out swinging. Ryan Blaney should be a driver you pay up for in this weekend’s Xfinity 500.

The first driver to consider for your NASCAR DFS lineups is Kevin Harvick. In his 42 races at Martinsville, Harvick has one win, five top 5s and an astounding 20 top 10s. His average finish of 14.7 at Martinsville is 8th best amongst active drivers. At Martinsville earlier this season, the driver of the #4 Ford finished 14th, but was definitely stronger than that finish. In the four short track races of 2022, Harvick has one win, two top 5s, and three top 10s, but what may be more extraordinary is his average finish. In those four races, Harvick has an average finish of 6.8 which is the 2nd best average this season. Harvick has had an up and down season, but he’ll definitely want to finish on some high notes. Kevin Harvick should be up for consideration in your NASCAR DFS lineups this weekend.

Another driver to consider in your DFS lineups is Brad Keselowski. The driver of the #6 Ford has a lot of experience at Martinsville and some success as well. In 25 races at “The Paperclip,” Keselowski has two wins, 12 top 5s and 17 top 10s. His average finish of 11.1 in those 25 races is the 4th best amongst active drivers. Earlier this season at Martinsville, Keselowski finished and uncharacteristic 17th. In the four short track races of 2022, Brad has yet to record a top 10 and has an average finish of 14.5. RFK Racing has been coming on strong as of late, so I expect a great performance from Keselowski. Brad Keselowski and that #6 car should be a driver you consider for your DFS lineups.