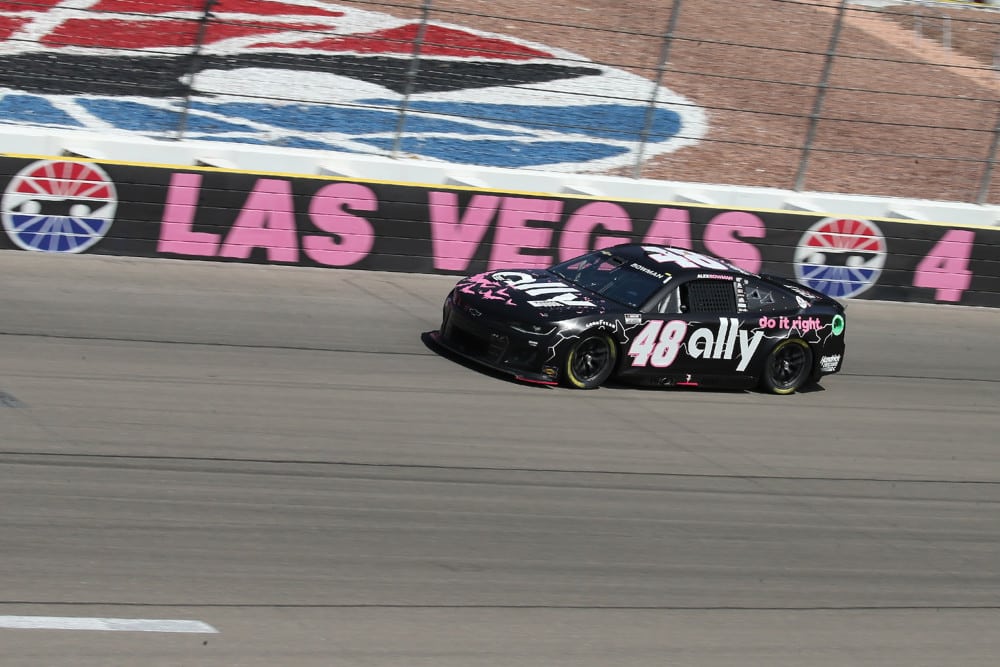 This week, drivers are taking their talents to South Beach to take on the 1.5-mile Homestead-Miami track. This track is the former host of NASCAR’s championship race until the 2020 season. Back into the playoffs for the first time since 2019, this is another win, and you are locked in race for the remaining seven drivers in the round of eight. William Byron was 2021’s winner of this race, Byron currently sits fifth in the standings, six points below the cutoff line. Get your Dixie Vodka 400 NASCAR DFS lineups set with these picks.

Bubba Wallace has been suspended by #NASCAR for intentionally wrecking Kyle Larson under green.

Here’s another look at the incident. pic.twitter.com/ap7tiTa0Tr

Tempers flared, cars were wrecked, and Bubba Wallace confronted Kyle Larson after their destroyed race cars came to a stop on the front stretch at Las Vegas. NASCAR deemed Wallace intentionally wrecked Larson’s #5 car and has suspended Wallace from competing this weekend. John-Hunter Nemechek will drive the #45 car at Homestead in place of Wallace. Joey Logano was victorious on the day, locking himself into the winner-takes-all race for the championship at Phoenix.

A win he’ll never forget!@KyleLarsonRacin is the CHAMPION in 2021! pic.twitter.com/ZnPnjZ5QXw

If you compare it to his performance last year, Larson has had a let-down season. The 2021 series champion who won ten points-paying races last year, has won just two races this season and was eliminated in the championship round of 12. However, Homestead has been one of Larson’s best tracks. A 4th place finishes last year. Larson didn’t finish worse than fifth in Chip Ganassi equipment from 2015-2017. Coining off last week’s fiasco Larson is out to prove something at one of his favorite tracks.

Last week, Chastain had one of the best cars last week and the top-rated pit crew on the weekend. He led 68-laps at Las Vegas and was just a few laps short of securing the win there. Chastain and his team are firing on all cylinders. Ross is out to prove the ability he has and is trying to lock himself into that final round for a shot at his first championship. Don’t be surprised if Chastain is smashing a Watermelon on Sunday in Florida as well as smashing you Dixie Vodka 400 NASCAR DFS lineups.

Gragson is back in that Hendrick 48 car as he continues to fill in for injured Alex Bowman. Gragson loves this track and his odds in the Xfinity Series (+200) prove that. On this week’s NASCAR GAMBLING PODCAST, I gave out the reasons why I love Gragson to win that race this week in spite of less than favorable odds. Then jumping in a top-tier Hendrick car for Sunday after being the top finishing Hendrick driver last week at Vegas. Gragson will be overlooked Sunday and I’ll be playing a ton of him.

Cole Custer dominated this track in his Xfinity Series days. His last three Xfinity starts here he finished 1st, 2nd, and 2nd. In his two Cup Series starts at Homestead-Miami Custer has had solid finishes here coming home 22nd and 23rd. Custer is at the bottom rung on the Stewart-Haas team, but at this price, if he can score another top-25 finish he’ll pay off. Team owner Gene Haas reportedly told media members this week that he wants to see Custer back in the #41 car next year, but co-owner and three-time Cup Series champion Tony Stewart would rather have Ryan Preece take over the ride. Maybe this lights a fire under Custer, and he steps up his game this weekend in South Beach.