College Football DFS Week 8: Targets and Fades at Every Position 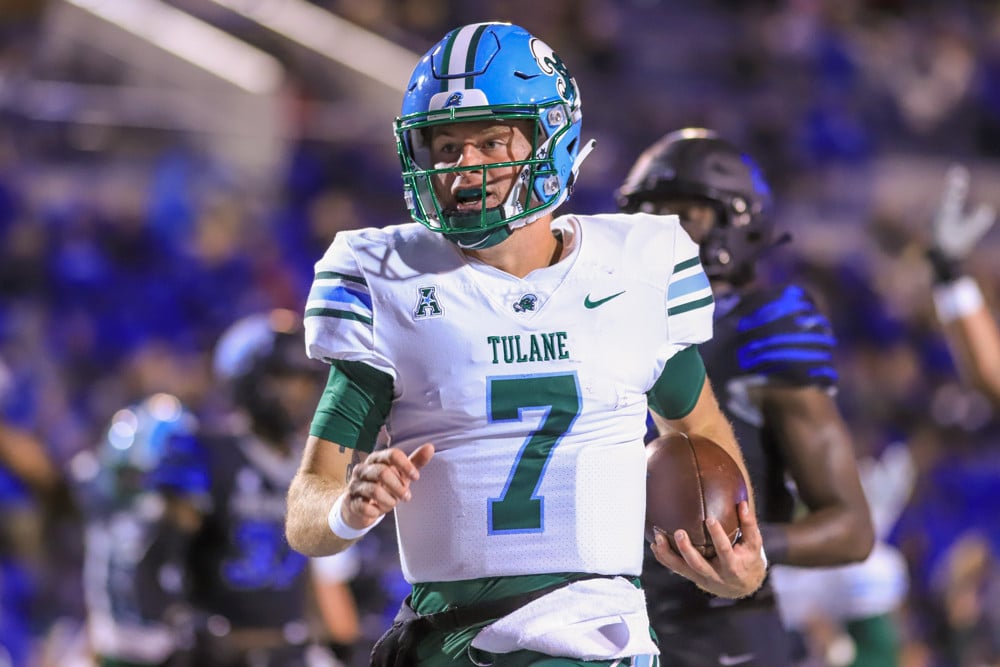 MEMPHIS, TN – NOVEMBER 27: Tulane Green Wave quarterback Michael Pratt (7) goes in for a touchdown during the game between the Memphis Tigers and the Tulane Green Wave on November 27, 2021, at The Liberty Bowl Memorial Stadium in Memphis, TN (Photo by Chris McDill/Icon Sportswire)

College Football Week 8 DFS is upon us. The leaves are falling and the days are getting shorter which means we’re already in the second half of this season. It was a wild DFS weekend a week ago and hopefully you saw some green screens. If so, let’s keep it up. If not, let’s buckle down.

Here are my targets and fades for each position for the main slate. Remember to tune into our podcasts where we’ll cover every slate over at The College Football Experience.

Sam Hartman – Wake Forest ($8.9K) Hartman has B2B quiet weeks which is unusual for the veteran signal caller. I love a bounce back spot and I’d imagine ownership will be low. There’s a lot of cheaper priced QBs on this slate that I’ll be gravitating towards, but Hartman will get back to his usual self this weekend.

DJ Uiagalelei – Clemson ($7.4K) I’ve been singing the praises of DJ U this year and I give Dabo credit for being patient with his young QB. Last week vs FSU marked the 4th straight game over 25 fantasy points. Clemson will never completely air it out and put up stupid passing stats but DJ5 is destined for another solid performance and his price remains affordable.

Quinn Ewers – Texas ($6.4K) There’s real shootout potential in this Texas at Oklahoma State game this weekend. While the game serves as Ewers first start on the road, its nice that the Cowboys Pass D currently ranks 126th in the country. That’s a juicy matchup at an affordable price. Expect Ewers to only get better with more reps.

All Ewers needs to be in the Stroud/Caleb/Bryce class of QB is reps. He can make every throw in the playbook and is no worse than the Devy QB4 IMO

Michael Pratt – Tulane ($6.3K) Pratt might be my favorite play at the QB position this weekend. Since returning from an injury, the Green Wave QB has put up 28.4 and 36.7 fantasy points in consecutive games. There’s going to be some points in the Memphis/Tulane matchup and I love his price.

Aidan O’Connell – Purdue ($6K) You usually would not be wise to start opposing QBs going into Camp Randall, I get that. However, the Badgers Pass D hasn’t been great this year and Purdue’s passing attack will get theirs regardless of the opponent. O’Connell is just priced too low which makes him an attractive play.

Jaxson Dart – Ole Miss ($6.7K) Back to back weeks over 30 fantasy points and Dart is less than $7K. That sounds like a bargain, right? Well, not so fast. I want to see how this Ole Miss offense looks on the road vs a decent opponent. A few weeks back, LSU shut down an explosive Miss State passing attack. I’d look elsewhere this week.

Bijan Robinson – Texas ($9.4K) Robinson is the safest bet for production on the slate. Go ahead and get cute trying to save some money while I plug Bijan into my lineup and then worry about the rest. The best RB in the country has 4 straight games eclipsing the century mark and 11 TDs on the season already. He’s worth the high price tag.

Zach Charbonnet – UCLA ($6.7K) I don’t love the matchup vs Oregon in Eugene but Charbonnet has been crushing it of late. The prime example of his success was the 9 yards per rush he averaged vs Utah where the Bruin RB ran for 2 yards shy of 200.

Xazavian Valladay – Arizona St ($6.6K) Stanford’s rush D currently ranks 119th in the country. Meanwhile, the Wyoming transfer has been a steady producer for the Sun Devils. In their last game, a win over Washington, Arizona State found a recipe for success and that entailed handing the ball to Valladay over 20 times. Expect them to stick to that script this week which should mean another 25+ point performance.

Casey Filkins – Stanford ($5.8K) DFS isn’t about efficiency. Filkins may have only put up 91 yards on 32 carries last week but they gave him the rock 32 times. Finding running room at home vs Az State should be easier than vs Notre Dame which means Filkins is a steal at under $6K this week.

Sean Tucker – Syracuse ($6.9K) I also had Tucker listed here in the same spot last week. He had a decent game vs NC State, going for 21.2 fantasy points but now the Cuse is on the road vs Clemson. His price dropped $400 from last week, but he’s still not rosterable for me. The Orange’s schedule is getting a lot tougher so expect their offense to slow down some.

AT Perry – Wake Forest ($7.4K) Wake dropped 41 on BC last year and in that contest, Perry put up a 4-81-2 stat line. He’s also now scored in three straight games this season. I’d expect another strong performance from the Deacs’ passing game and Perry makes for a no-brainer stack with Hartman.

Xavier Worthy – Texas ($6.1K) If the Texas game this weekend is a shootout and if Oklahoma State continues to be awful vs the Pass, Worthy should be in store for another nice game. After not finding pay dirt in Texas’s first three games, Worthy has 6 TDs in the last 4. If you can’t afford Worthy, another attractive Longhorn pass catcher is Ja’Tavion Sanders at $3.7K.

Zay Flowers – Boston College ($5.9K) The Golden Eagles may be a complete and utter mess but Flowers isn’t to blame. Through six games, he’s registered 42 catches for 556 yards and 5 TDs. The second highest amount of receptions on BC is their TE with 17. It’s safe to say that Flowers is the BC passing game and it should be a nice matchup vs Wake Forest.

Kayshon Boutte – LSU ($5.3K) We finally saw Boutte’s potential last week. It has been a quiet 2022 for the uber-talented LSU WR, but 6-115 vs Florida should serve as his coming out party. While I’m concerned about the consistency of this LSU passing game, he should be their WR1 from here out.

After a slow start coming back from the injury, LSU junior WR Kayshon Boutte finally looks like himself.

A twitchy game-breaker able to impact the passing game at all three levels while displaying speed, burst and the ability to break tackles. 1st round profile. pic.twitter.com/7abPCKgBYw

Mason Fairchild – Kansas ($3.7) The Jayhawks are passing the ball more with Jason Bean ($7.3K) starting at QB. That’s resulted in Fairchild going for 3-80-1 and 6-106-2 in back to back weeks. His price tag hasn’t caught up to his recent spike in production.

Emeka Egbuka – Ohio State ($6.9K) all signs are pointing towards Jaxon Smith-Njigba ($7K) finally coming back this week. That should mean Egbuka gets moved down to the 3rd option in a game that shouldn’t be considered a plus matchup.