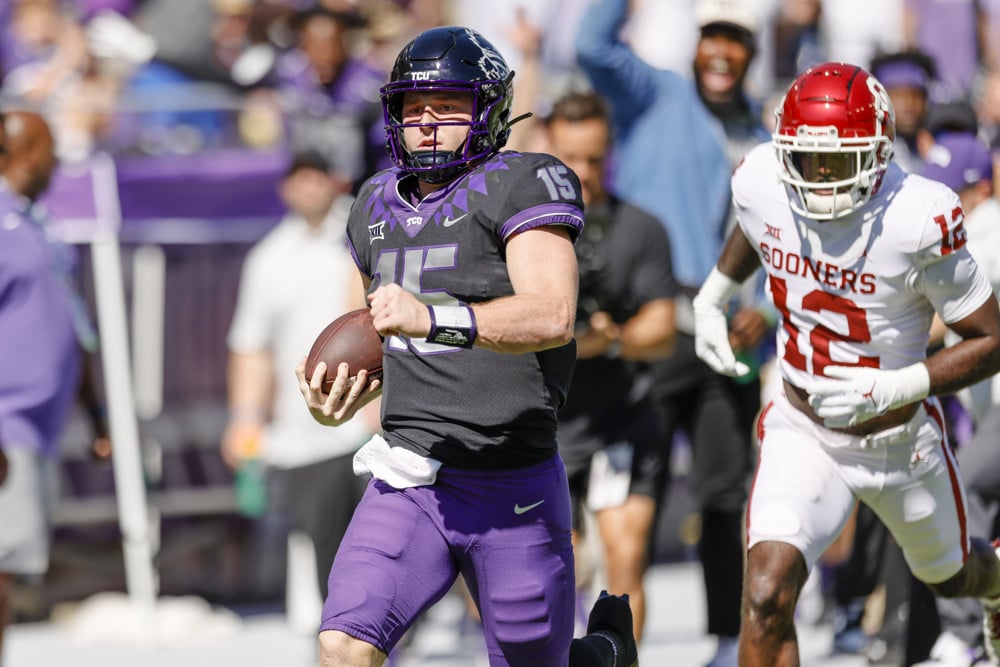 We’re already in Week 8? The college football season is only 14 weeks plus bowl games! The good news is that we’ve got a larger sample size, we have a better idea who teams really are, and we’re still profitable for the year. The bad news is that there are only six weeks of college football left before we head into bowl season.

Let’s dive into the point total picks that can’t miss for week eight of the college football season.

TCU has the 3rd best scoring offense in the country, and is averaging 48.5 points per game this year. The books only have them down for 28.5 points on Saturday against Kansas St.

The Horned Frogs are built different. They have at least 38 points in every game played this year. In three home games, the least amount of points TCU has scored is 43. The Kansas St. defense gave up 34 points to the Oklahoma Sooners, so they can be scored on with by a capable offense. Sooners QB Dillon Gabriel was able to light up the Wildcats for four touchdowns and over 300 passing yards. TCU QB Max Duggan should be able to do approach those numbers with the high-powered Horned Frogs offense. TCU should be able to go over 28.5 in a game that could end up as a shootout on Saturday.

The Texas Longhorns roll into Stillwater, OK for the last time as a member of the Big 12 conference on Saturday. The Cowboys have the fourth best scoring offense in the country, and are averaging 45.3 points per game this year. The fewest points they’ve scored at home this year was 34 against Arizona St. in week two. The books have this set at 26.5 points for the Cowboys, but they should be able to get over that against the Longhorns.

Texas comes into this one with the 20th best scoring defense in the country, and are averaging 18.3 points per game against this year. This is aided by a weird shutout win against Oklahoma and only 10 points allowed to Louisiana-Monroe.

In the Longhorns only game on the road this year, they allowed 37 points in a loss against the Texas Tech Red Raiders. Spencer Sanders will need to hurt the Longhorns on the ground and through the air, but going over 26.5 points in Stillwater should be achievable. Texas has shown that it struggles on the road, and Stillwater should be as hostile as Lubbock was. This team total is way too low, and bettors need to be on the over.

The Notre Dame offense has been rough this year. They’ve only averaged 23.7 points per game this year, and are ranked 100th out of 131 FBS offenses. They’ve also played a weird schedule that independent teams have to put together. They’ve played a few tough teams and their strength of schedule is 13th out of 131 teams. That doesn’t mean that their offense is any good.

The most points they’ve put up this year is 45 in a wild game against North Carolina. Other than that, they haven’t gone over 28 points. They’re not an exceptionally explosive offense, and this game should be more of a ‘running clock’ with two teams relying more on a ground attack than airing it out.

Notre Dame should win, probably comfortably, but their offense isn’t built to pile up points. 37.5 is awfully optimistic here, and bettors should be on the under.

Setting this at 51 points makes sense for the books. Purdue has a capable offense and can push point totals. Wisconsin has averaged 31.3 points per game this year. However, this is a Big 10 conference game with two teams that have a lot of history. Wisconsin’s defense shows up against Purdue, especially in Madison. This game should end up as an absolute rock fight between two teams that know each other well.

This game script should be similar to the game Purdue played at Minnesota that ended in a 20-10 loss for the Boilermakers. Aidan O’Connell only threw for 199 yards and tossed a pair of interceptions while the Minnesota offense did enough to get the win. Braelon Allen has gone over 100 yards in each of his last two games, and should find holes in the Purdue defense. Wisconsin should be able to grind the clock down, and keep the score below the 51 points the bookmakers have set for this one.

Defense won’t be played in this one, and points should be scored. Let’s bang the over for an easy cash on Saturday MACtion.