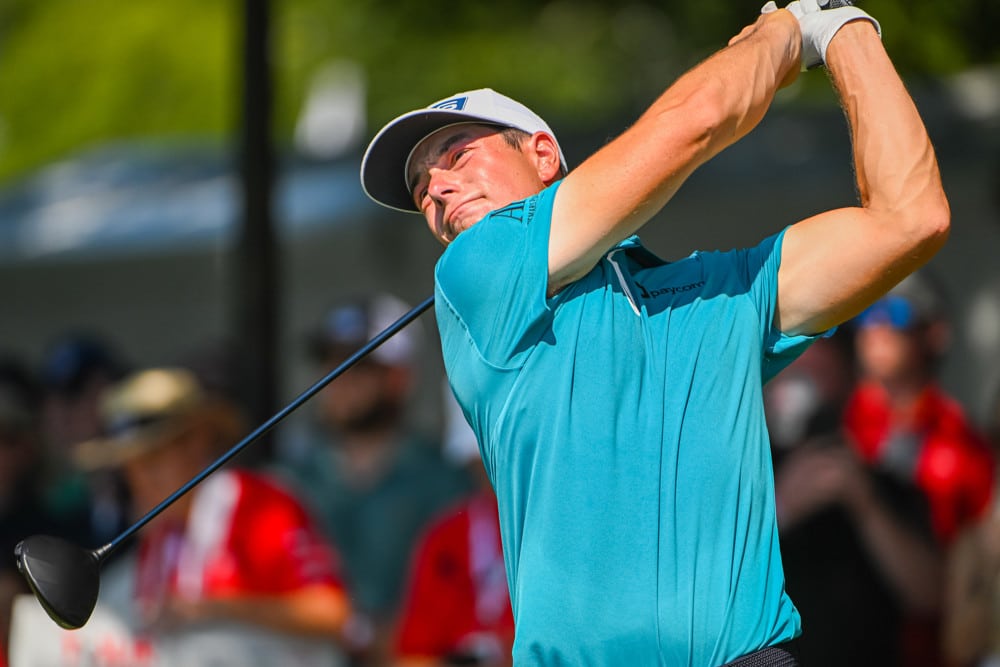 ATLANTA, GA – AUGUST 27: Viktor Hovland (NOR) on the 10th tee during the third round of the PGA TOUR Championship on August 27, 2022 at East Lake Golf Club in Atlanta, GA. (Photo by John Adams/Icon Sportswire)

Let’s take a shot on Viktor Hovland this weekend in Japan. He is currently in the Top 10 and is playing well without his greatest weapon – his irons. He ranks T57 in GIR (Greens In Regulation), which is near dead last in this limited field. If Hovland is able to find his irons, look for him to vault up the leaderboard and hop into contention this weekend. 17/1 is excellent value for an explosive player like him. Add Hovland to your 2022 ZOZO Championship betting card this weekend.

I don’t mind taking at stab at Hollywood Hoge this weekend. Hoge sits at -4 and is six shots off the lead. Of course, six shots back of reliable, prolific and clutch winners like Andrew Putnam and Rickie Fowler might be insurmountable (hope you got the sarcasm). But if there’s a man to do it, it’s Tom Hoge. Through two rounds, he is continuing the great form that he showed in Las Vegas. He’s fresh off a T4 at the Shriners Children’s Open and a T12 at the Fortinet. The game is there. He just needs to put it all together on the weekend.

Through 36 holes, Hoge has only made one bogey and has hit 28 greens in regulation. He is hitting the ball extremely well but failing to convert putts. And the stats back that up. Hoge ranks 63rd in putts per GIR. He is hitting the ball well enough to be leading this golf tournament. If the putter can heat up, look for Hoge to make a charge on Saturday. Bet him live at the 2022 ZOZO Championship.

What a round for two-time major champion Collin Morikawa. He carded a six under 64 to vault himself inside the Top 10. After a poor opening round, Collin is firmly in the mix this weekend.

Over the course of the season, he struggled to hit his coveted “soft fade” off-the-tee. But he seems to have found something this week. Morikawa ranks 2nd in the field in driving accuracy. There is no one else on the PGA Tour more dangerous than Collin Morikawa is out of the fairway. I tweeted in Round 1 that Morikawa has switched his driver back to the original TaylorMade Sim. This may just be the fix Morikawa needed to get things in the right direction off-the-tee. I would not be surprised if Morikawa wins this week, but I will take the plus money for a Top 5 because I am sure he will find himself in contention down the stretch. Add that bet to your 2022 ZOZO Championship card.

Finally, I’m adding some shares of Si Woo Kim onto my 2022 ZOZO Championship betting card. He currently sits at -3, which is good for T24. Digging into the stat profile, we see that Si Woo is putting extremely well as he is 6th in putts per GIR. Si Woo is so dangerous when he is putting well. His 71 in Round 1 was likely due to nerves, pressure, and flukiness with the poor weather conditions. He bounced back in Round 2 with a rock solid 66, including a long birdie putt on his final hole. Look for Si Woo to build off that momentum, continue to putt well, and find his way into the Top 10 come Sunday.