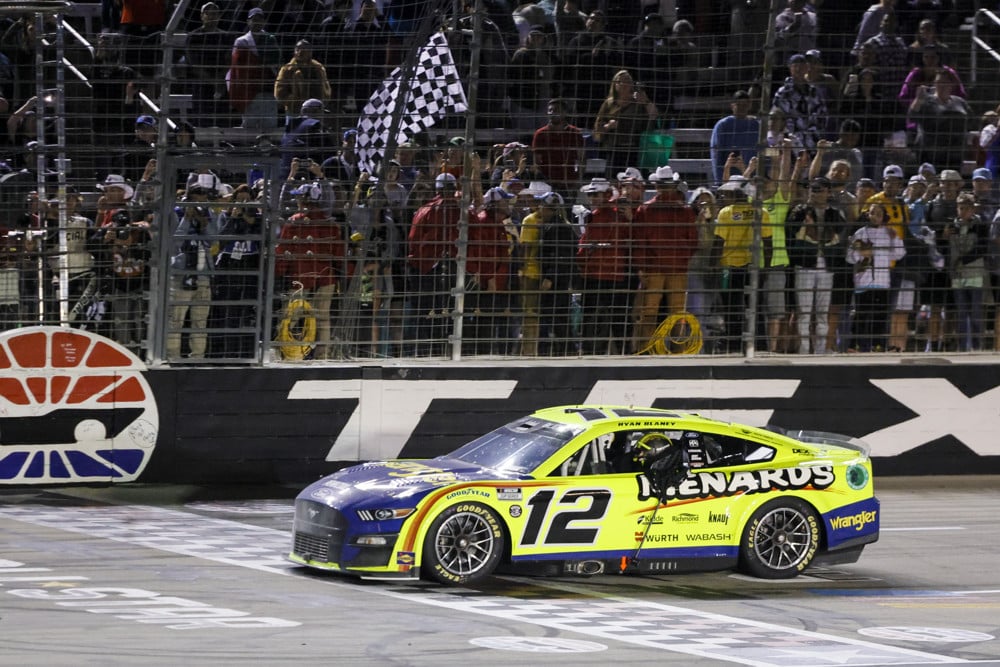 FORT WORTH, TX – MAY 22: Ryan Blaney (#12 Team Penske Menards/Wrangler Ford) climbs out of his car after winning the NASCAR All-Star Race on May 22, 2022 at the Texas Motor Speedway in Fort Worth, Texas. (Photo by Matthew Pearce/Icon Sportswire)

Get your NASCAR DFS lineups ready as NASCAR heads to the Texas Motor Speedway for the AutoTrader EchoPark Automotive 500. The Round of 12 starts and the road to the Championship Race in Phoenix goes through Fort Worth, Texas this weekend. Built in 1995, Texas Motor Speedway has hosted winners the likes of Jimmie Johnson, Tony Stewart and the legend himself, Dale Earnhardt Jr. Kyle Busch leads all active NASCAR Cup Series drivers with four wins at Texas. Earlier this season, Ryan Blaney took home the checkered flag in the All-Star Race at Texas Motor Speedway.

When setting a NASCAR DFS lineup, there are some questions you need to ask yourself. Will Chevrolet continue to show the speed they have throughout the 2022 season? Can Toyota continue their dominance on 1.5 mile tracks? Does Ford have anything for the Chevys or Toyotas this weekend? Will we see a non-playoff driver win a playoff race for the 4th consecutive week?

The first driver to pay up for in your NASCAR DFS lineups at Texas is Denny Hamlin. The driver of the #11 Toyota has an incredible record at Texas Motor Speedway. In 31 races, Denny has three wins, seven top 5s, and 14 top 10s. Hamlin’s average finish at the track of 13.7 is 7th best amongst active drivers. Last year at Texas, he finished 11th after leading a handful of laps and finishing in the top 10 in both stages. In this season’s All-Star Race, Denny finished 2nd behind winner Ryan Blaney. The Toyota’s have had an up and down season, but Denny has been very strong recently. Denny Hamlin is a driver to pay up for in the AutoTrader EchoPark Automotive 500.

Another driver I would pay up for this weekend is Chase Elliott. Elliott doesn’t have the strongest stats at Texas, but you can never count him out for a solid performance. At Texas, Chase has raced 11 times never making it to victory lane, but he has scored a top 10 in more than half of his visits. The driver of the #9 Chevrolet has an average finish of 11.5, which is 6th best amongst active drivers. Back in 2021, Elliott finished 7th and, in this year’s, All-Star Race, he finished 23rd due to an accident. I wouldn’t look too much into his result earlier this season as it was a pretty chaotic race. All in all, Chase Elliott is one of the most consistent drivers this season and should be a driver you pay up for in your NASCAR DFS lineups.

No one has been better than Christopher Bell recently. At Texas, Bell has only been in three races but has finished inside the top five in two of the races. His average finish of 9.0 is 2nd best amongst active drivers in the Cup Series. Last season, the driver of the #20 Toyota scored a 3rd place finish at Texas Motor Speedway. In the All-Star Race this season, Bell finished inside the top 10. I really like Christopher Bell this weekend and he should be a driver to pay up for in the AutoTrader EchoPark Automotive 500.

𝗥𝗢𝗨𝗡𝗗 𝗢𝗙 1️⃣2️⃣ 🔜@CBellRacing & @dennyhamlin move on to the next round of the #NASCARPlayoffs! pic.twitter.com/0DWlQN1SoB

A Toyota driver to consider for your NASCAR DFS lineups this weekend is Kyle Busch. Texas Motor Speedway has been Rowdy’s playground in his career. In 31 races, Busch has four wins, 14 top 5s, and 18 top 10s. He also has the 5th best average finish amongst active drivers at 10.9. Last year at Texas, the driver of the #18 Toyota led 20 laps and won stage one on his way to an 8th place finish. In this year’s All-Star Race at Texas Motor Speedway, Kyle Busch finished 21st due to an accident. Busch has had some bad luck recently with his engines, but I expect a bounce back at one of his favorite tracks.

One non-playoff driver I would consider when setting NASCAR DFS lineups for this weekend in Erik Jones. In 10 races at Texas, Jones has finished in the top five half of his races and his average finish of 10.5 is 4th best in the Cup Series. Last season, the driver of the #43 Chevrolet finished 12th. In this year’s All-Star Race, Jones finished 20th due to an accident. Although he hasn’t had recent success in Texas, Jones has shown a lot of speed lately and should be considered in NASCASR DFS lineups.

A driver to avoid this weekend when setting your NASCAR DFS lineups for the AutoTrader EchoPark Automotive 500 is Michael McDowell. The stats say it all! McDowell has 23 starts and has never recorded a top 10 at Texas Motor Speedway. His best finish was 14th back in 2018. The driver of the #34 Ford has an average finish of 29.8, which is 2nd worst amongst active drivers. Last season, McDowell finished 17th and in this season’s All-Star Race, he finished 15th. Michael McDowell is definitely a driver to avoid this weekend at Texas.