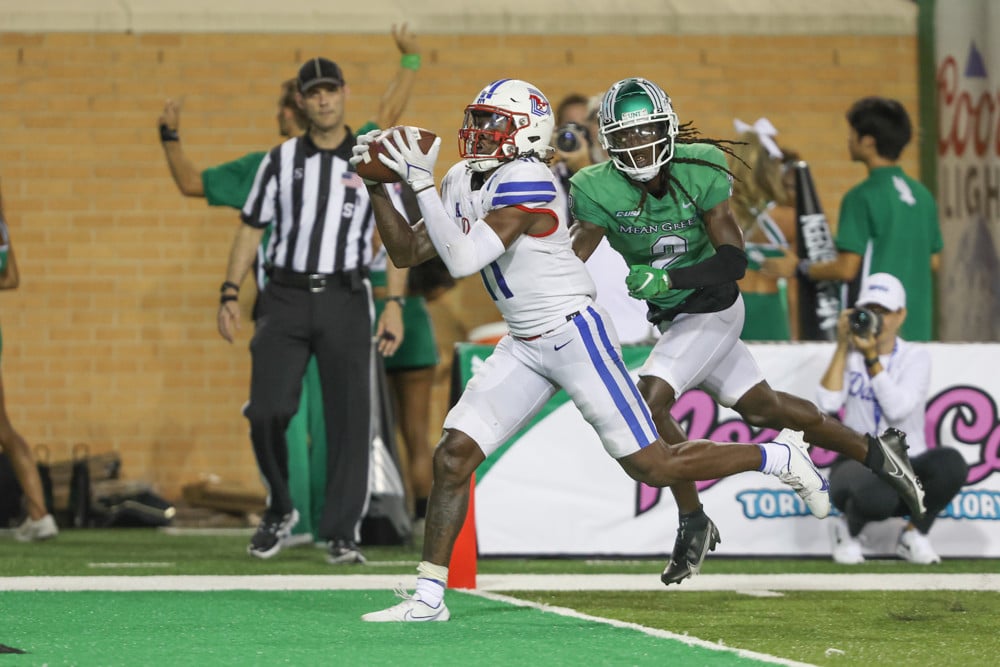 DENTON, TX – SEPTEMBER 03: Southern Methodist Mustangs wide receiver Rashee Rice (11) makes a catch in the end zone for a touchdown during the game between SMU and North Texas on September 3, 2022 at Apogee Stadium in Denton, TX. (Photo by George Walker/Icon Sportswire)

Welcome back College Football DFS fans. Week 3 was my most profitable week in DFS and in gambling to let’s keep up with the momentum. Here are my targets and fades for each position for the main slate this weekend.

Remember to tune into our podcasts where we’ll cover every slate over at The College Football Experience.

Hendon Hooker – Tennessee ($8.1K) There’s a lot of attractive QBs on the main slate and Hooker leads that charge. While he’s always a threat to have a monster game, Hooker hasn’t put up over 30 fantasy points this year. Big game loading…

Jalon Daniels – Kansas ($7.9K) Daniels may be $1.4K more expensive than last week but that might be because he just put up 45.6 fantasy points. That was on the road vs a good Houston D. Now at home and vs Duke, I’d expect more of the same. I’ve been rostering Daniels about every week and I see no reason to stop now.

Tanner Mordecai – SMU ($7.8K) You’re going to want pieces of this game with an O/U of 70.5 points. That should start with the dangerous SMU passing attack and Tanner Mordecai. Through 3 games, Mordecai has over 1,000 passing yards and 10 TDs. Plus, he tossed 4 TDs vs the Frogs last year.

Drake Maye – UNC ($6.9K) Maye looks legit. I understand the ND D has been impressive and they had success slowing down Ohio State, but I believe in the Tar Heel offense. Especially coming off a bye, and with some injured WRs potentially coming back, I’m all in on Maye for under $7K.

Drew Pyne – Notre Dame ($5.4K) The flip side of the UNC offense is their horrendous D. It’ll take some guts to go with the Irish QB but the price and the matchup are right.

Robby Ashford – Auburn ($5K) if you want to roll the dice on a different dirt-cheap QB, how about the new starting QB at Auburn? They’re at home playing vs a bad Mizzou D and Ashford provides dual threat abilities. I’m just sayin’…

Sam Hartman – Wake Forest ($7.5K) after coming back from an injury, Hartman has had two solid games but has yet to blow up. It won’t be this week vs the tough Clemson D either. Be patient and wait to roster Hartman until later in the year. Hartman threw 39 TDs last year but only 1 in the Clemson game.

Mohamed Ibrahim – Minnesota  ($9.6K) This spot in my weekly column is saved for Ibrahim. Minnesota has cruised past 3 inferior opponents and Big Mo has crushed it each game (even without needing to play most of the 2Hs). He’ll play the whole game vs Sparty and rack up 25+ carries.

Bijan Robinson – Texas ($8.3K) Somehow, Robinson was only priced at $6.5K last week. If you didn’t play him at that price, perhaps you should get a different hobby. Even with Bijan now being $1.8K more expensive, he’s still a great play vs Texas Tech. Still at $1.3K cheaper than Ibrahim, the value is still here.

Will Shipley – Clemson ($6.7K) Simply put, Clemson’s physicality dominates Wake Forest on an annual basis. Last year, the Tigers accumulated 333 rushing yards and 4 rushing TDs vs the ‘Deacs. Two Clemson RBs ran for over 100 in that game and Shipley was one of them. Another big day is on the horizon.

Nicholas Singleton – Penn State ($6.5K) the 5 star true freshman is quickly making his presence felt as one of the most electric young RBs in the country. The lack of volume is a concern but Singleton is averaging over 11 YPC and leads PSU in touches. Watch him explode this week vs Central Michigan.

Jirehl Brock – Iowa State ($4.9K) All ISU RBs do is get fed the rock and run for over 100 yards and a couple TDs each week. Brock has eclipsed the century mark in two of three games this year and is destined for another similar output. Baylor has a solid D but that didn’t stop ISU’s Breece Hall from running for 190 and 2 TDs last year and that was in Waco.

Richard Reese – Baylor ($3K) It’s rare to find a RB for only $3K that ran for 156 yards and 2 TDs last week. There’s been some injuries in the Baylor backfield and some guys may be returning this week, but Reese may have sewn up the RB1 status already. He’s worth the gamble at such a low price.

Rashee Rice – SMU ($8.6K) Rice has 3 straight games putting up at least 33 fantasy points. At anything lower than $9K, Rice might be a must-roster. You’ll have to drop $16.4 for an SMU stack which is pricey, but that’s exactly what I’ll be doing.

Jalin Hyatt – Tennessee ($6.8K) I want pieces of this Tenn passing attack this week and Hyatt may be the WR to target. He’s always a strong play but with Cedric Tillman’s ($7.1K) status in the air, even more looks may be coming Hyatt’s direction. Bru McCoy ($5K) is also an intriguing option if Tillman is out.

Luther Burden III – Mizzou ($5.6K) you can’t argue with his talent. Thru 3 games, the 5 star true freshman has looked the part but has yet to blow up. Mizzou will get the ball in Burden’s hands in a variety of ways and one of these Saturdays we’ll see a monster outing.

He’s not eligible until the 2025 draft, but Mizzou WR Luther Burden III is a bonafide playmaker.

He has size, speed, agility, ball skills and return value. Might be the most gifted athlete at WR in the nation. pic.twitter.com/oq6eYMDrUv

Donovan Ollie – Washington St ($3.5K) Good luck trying to find a team’s leading WR for only $3.5K but that’s exactly what Ollie is for Wazzu. As the team’s WR1, Ollie has pulled down 5 more catches than the next Cougar pass catcher and has reeled in at least 5 balls in all 3 games this year.

Brevyn Spann-Ford – Minnesota ($3.5K) it’s a shame that Minn’s WR1, Chris Autman-Bell, is out for the year. However, injuries open up opportunities for others so expect the Gopher TE to receive more targets this week vs the porous Michigan State Pass D.

Mitchell Tinsley – Penn State ($7.7K) I’m not sure how Tinsley is the 3rd highest priced WR on the slate. Sure, PSU is playing a MAC school but you always have to worry about game script in a blowout and I’d rather get pieces of the Nittany Lions rushing attack.