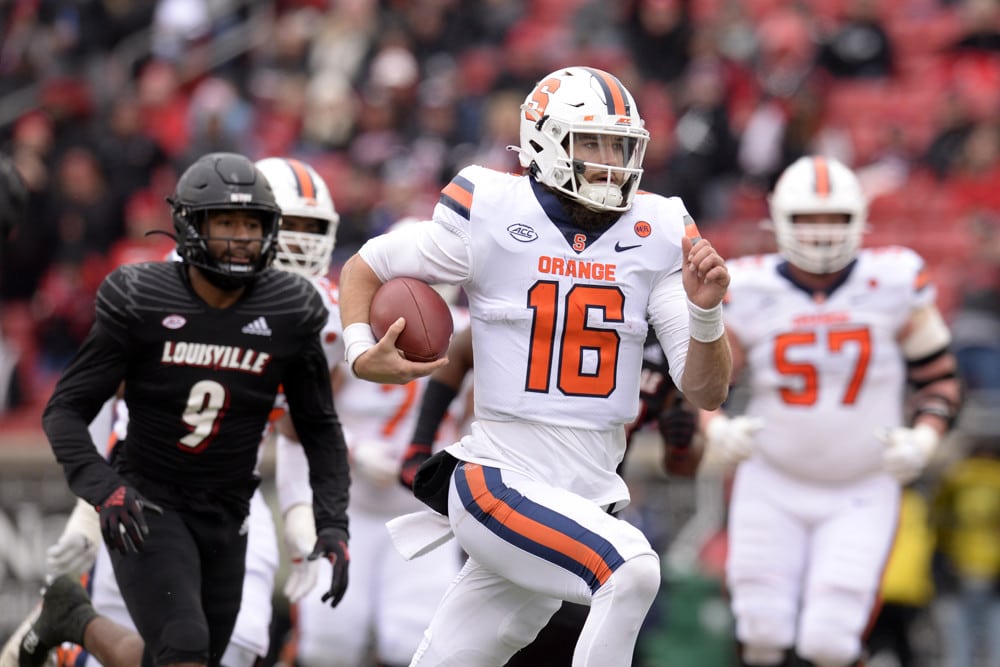 After a wild weekend, College Football is back and so is CFB DFS. I can’t wait for Saturday so let’s just dive in. Here are my targets and fades for each position for the main slate this weekend.

Remember to tune into our podcasts where we’ll cover every slate over at The College Football Experience.

Dorian Thompson-Robinson – UCLA ($8.3K) With so many attractive mid-tier priced QBs on the main slate, I’ll be looking to save coin at the position. However, that doesn’t mean DTR won’t go off and have a monster game. Given a clean bill of health, we don’t have to be concerned about the injury which means we should see another 35+ fantasy point performance like Week 1 vs Bowling Green.

Aidan O’Connell – Purdue ($7.5K) Purdue is gonna throw the rock all over the field and AOC is gonna produce regardless of the opponent. He threw for 356 yards vs Penn St but only 1 TD pass was disappointing. Expect roughly the same yards vs the ‘Cuse along with one to two more TDs.

Stetson Bennett – Georgia ($7.3K) I never thought I’d spend this kind of money on Stetson Bennett but the veteran QB has gotten off to an outstanding start this year. Back-to-back 300+ yard passing games and consecutive games with a rushing TD! Additionally, UGA might actually have to pass some in the 2H vs an SEC opponent so expect another stellar outing.

Casey Thompson – Nebraska ($6.8K) Say what you want about the ‘Huskers but through 3 games, Thompson has almost 900 passing yards and 8 total TDs. Nebraska is at home and will have to keep up with the Sooners offense. He may still throw a couple picks but this is a volume play with upside.

Jalon Daniels – Kansas ($6.5K) don’t look now but the Jayhawks are playing good ball and that starts with QB Jalon Daniels. He’s made strides as a passer (like the 3 TDs thru the air vs WVU) but really provides another element with his legs (85 yards rush vs WVU). Kansas just went into a hostile environment and got a road conference win so they won’t be overmatched vs a Houston D that’s allowing 343 passing YPG.

Garrett Shrader – Syracuse ($6.4K) “The Shredder” might be my favorite QB play of the day. Still severely underpriced, Garrett Schrader has consecutive 30+ fantasy performances and he’s still under $6.5K – sign me up!

Jaxson Dart – Ole Miss ($9K) this is a no-brainer. The second most expensive QB on the slate shouldn’t be splitting time with another QB (Luke Altmeyer – $6.8K) on his own team.

Mohamed Ibrahim – Minnesota ($9.4K) I know the price tag is high but Mo Ibrahim is a lock for 100 yards and a couple TDs. My approach in this slate will be to have more of a balanced lineup but if you are going “Stars and Scrubs” the MN RB is one of the stars to target.

Ray Davis – Vanderbilt ($6.8K) An under-the-radar game on this slate which could produce a ton of fantasy points, is Vandy at NIU. With Rocko Griffin injured, Davis has the backfield to himself vs a MAC opponent. It’s a perfect spot to play Davis who also projects to have low ownership.

Kenny McIntosh – Georgia ($6.7K) McIntosh is doing his best Jared Cook impersonation this year as the Dawg’s pass catching back. In two games, he’s caught 14 balls for 178 yards while registering a rushing TD in both games.

Zach Evans – Ole Miss ($6.5K) Evans is one of the most electric backs in the country but his upside is somewhat limited by Kiffin’s RBBC approach. The TCU-transfer should still have a nice game vs Georgia Tech but I only wish he’d get 20+ touches a game.

The explosiveness of Zach Evans impressive and his cuts are so smooth pic.twitter.com/koIkz07ml0

Zach Charbonnet – UCLA ($6.3K) another Bruin with some injury concerns but it appears the Michigan-transfer is ready to rock after sitting out the game vs Alcorn St. If he’s healthy, Charbonnet is a steal at only $6.3K at home vs a G5 opponent.

Tank Bigsby – Auburn ($5.6K) Bigsby is just underpriced here at less than $6K. Auburn will be looking to pound the rock which should lead to 20+ touches for Tank. That alone is enough reason to roster the Tiger RB1.

Daniel Hishaw – Kansas ($4.9K) while the Houston D has mainly been gashed thru the air, the Kansas RBs are priced too low. Hishaw and Devin Neal ($5.4K) split touches evenly but have still been very productive. While most DFS’ers might roster Neal, Hishaw makes a good pivot play if you want pieces of this Kansas offense.

Sean Tucker – Syracuse ($8.9K) Hear me out – I love Sean Tucker but I’m not crazy about the idea of rostering both him and Garrett Shrader vs a Purdue D that stuffed Penn St’s ground game. So while Tucker could still kill it, I’d rather roster the QB at $2.5k less.

Charlie Jones – Purdue ($8K) 21 catches for 286 yards and 4 TDs thru two games. ‘Nuff said. AOC’s childhood friend has absolutely crushed it at Purdue which makes me wonder why he ever signed up to play for Iowa. Very wise transfer my man.

Brock Bowers – Georgia ($7K) – I know it’s difficult to lay down $7K on a TE who’s only caught 5 balls for 95 yards thru 2 games and has yet to score a TD. However, Bowers is a beast and a breakout game is coming.

Jalen Wayne – South Alabama ($5.5K) 10 catches in each of the first two games plus a game script that should have the Jaguars passing often. All that and this guy is only $5.5K? It’s not like the UCLA D has been all that impressive – BG scored 17 in the 1H Week 1.

Daewood Davis – Western Kent ($5.2K) We’ll touch on another Hilltopper WR soon, but the Oregon St transfer plays on one of the most pass-happy teams in the country and happens to lead that team in receptions and yards. WK scored 31 points on IU last year and will find success thru the air again this year. Davis is underpriced here.

Cam Camper – Indiana ($4.8K) let’s stay in the same game and fade the Hilltopper D this time. Like Davis above, Camper leads his team in receptions and yards and is under $5K. The price is right and so is the matchup.

Keanu Hill – BYU ($3.5K) only look to Hill if Gunner Romney ($6K) and Puke Nucua ($4.4K) are both still out for BYU. Neither WR played last week which led to Hill pulling down 4 balls for 57 yards. Romney and Nucua have the dreaded GTD tag so we’ll have to pay close attention leading up to kickoff.

Malachi Corley – Western Kent($8.1K) I like Corley as a WR but there’s no way he should be $2.9K more expensive than Daewood Davis. Corley is too expensive for a guy who caught 4 balls for only 12 yards last week. Shop elsewhere.