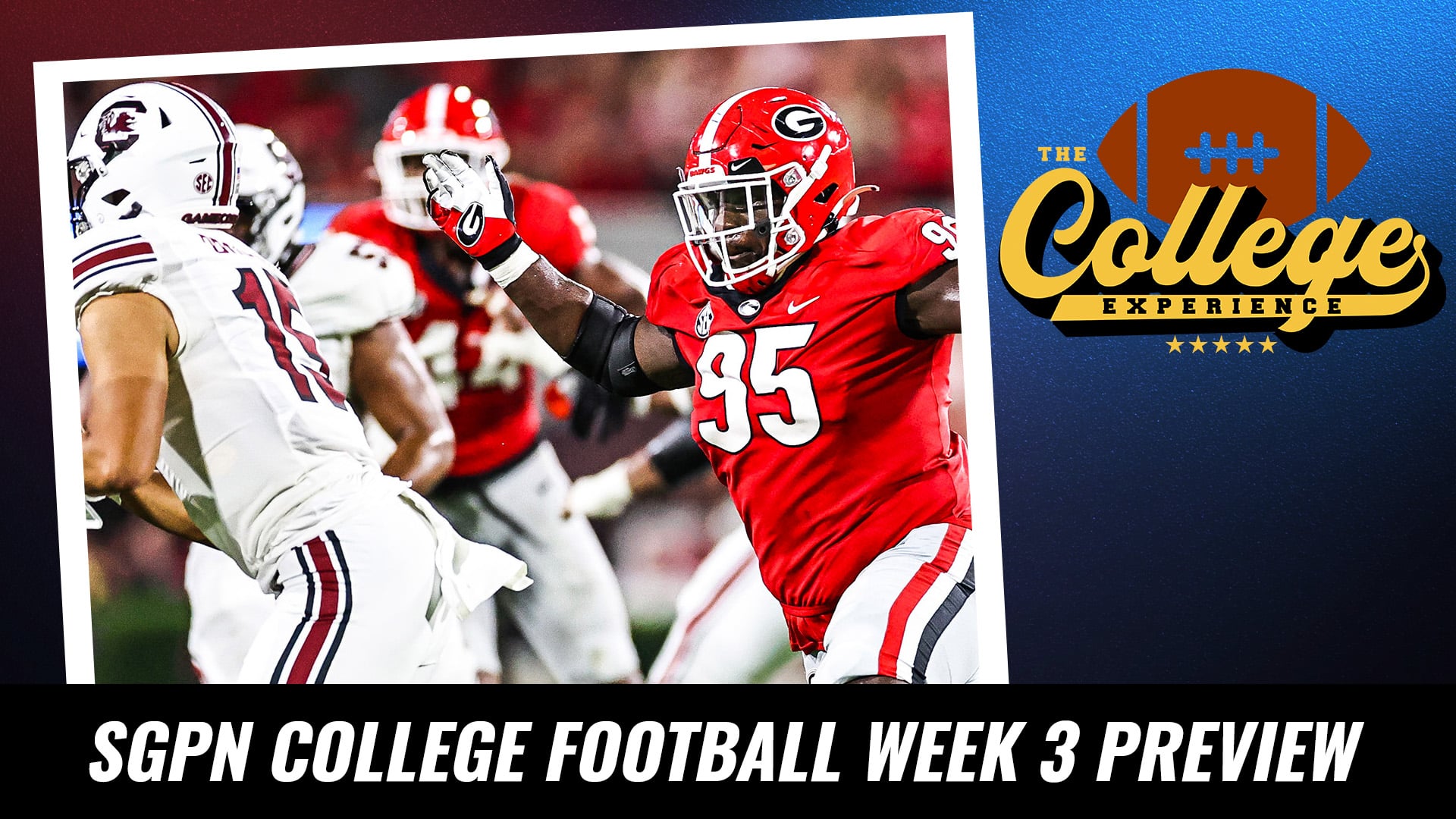 The College Football Experience (@TCEonSGPN) on the Sports Gambling Podcast Network previews the upcoming Week 3 college football slate. Pick Dundee aka (@TheColbyD), Patty C (@PattyC831) & NC Nick (@NC_NicK) break down all of the weekends action and key in on their favorite bets of the weekend. Will Stetson Bennett and the Georgia Bulldogs roll Spencer Rattler and the South Carolina Gamecocks?

Will Mike Norvell and the Florida State Seminoles move to 3-0 for the first time since 2016? Will Ben Bryant and the Cincinnati Bearcat win the Victory Bell against their rivals the Miami OH Redhawks? Can Mickey Joseph win his first game as head coach of the Nebraska Cornhuskers against Dillon Gabriel and the Oklahoma Sooners? Will Sean Tucker and the Syracuse Orangemen go to 3-0 when they take on Aidan O’Connell and the Purdue Boilermakers?

Could the Sun Belt do it again with South Alabama and Old Dominion hitting the road to take on power 5 opponents? Will Greg Schiano and the Rutgers Scarlett Knights roll against the Temple Owls and Stan Drayton? Could Jack Plummer and the California Golden Bears give Drew Pyne and the Notre Dame an absolute crushing loss in South Bend? Will Adrian Martinez and Kansas State avoid a potential upset against Michael Pratt and the Tulane Green Wave?

Will Kyle Vantrease and the Georgia Southern Eagles make it back to back road wins when they had down to Birmingham to take on Dylan Hopkins and the UAB Blazers? Can Camerun Peoples and the Appalachian State Mountaineers beat down their rivals the Troy Trojans and Gunnar Watson? Will Bo Nix get his first big time win as an Oregon Ducks against Jaren Hall and the BYU Cougars?

Can Bryan Harsin avoid a crucial loss at home against Sean Clifford and the Penn State Nittany Lions? Will Lance Leipold and the Kansas Jayhawks move to 3-0 with a tough road game against Clayton Tune and the Houston Cougars? Is something special brewing in Pullman, Washington with Cameron Ward and the Washington State Cougars? Is Mike Leach and Mississippi State flying under the radar nationally as they head into Baton Rouge to take on Jayden Daniels and the LSU Tigers?

Will Deion Sanders and Jackson State handle Hugh Jackson and Grambling? Will Joey McGuire go to 3-0 as head football coach of the Texas Tech Red Raiders as they head to Raleigh to take on Devin Leary and the NC State Wolfpack? Can Bobby Petrino pull off the upset with Missouri State heading into Arkansas? Will Bryan Ferentz and the Iowa Hawkeyes get the ball rolling against Ken Wilson and the Nevada Wolfpack?

Will Michael Pennix and the Washington Huskies knock off Jalen Berger and the Michigan State Spartans in Seattle? Can Frank Harris Jr. and the UTSA Roadrunners do the unthinkable and upset the Texas Longhorns in Austin? Will the Montana State Bobcats give Jonathan Smith and the Oregon State Beavers a game in Corvallis? Will Jimbo Fisher avoid a terrible September by beating Tyler Van Dyke and the Miami Hurricanes?

Is North Dakota State about to take down another FBS when they head to Tucson to take on Jacob Cowing and Arizona Wildcats? Will Kyle Whittingham and the Utah Utes get revenge on Chance Bell and the San Diego State Aztecs in Salt Lake City? Is Jake Haener and the Fresno State Bulldogs primed to give the USC Trojans and Lincoln Riley a game in Los Angeles? We talk it all and more on this Week 3 edition of The College Football Experience.