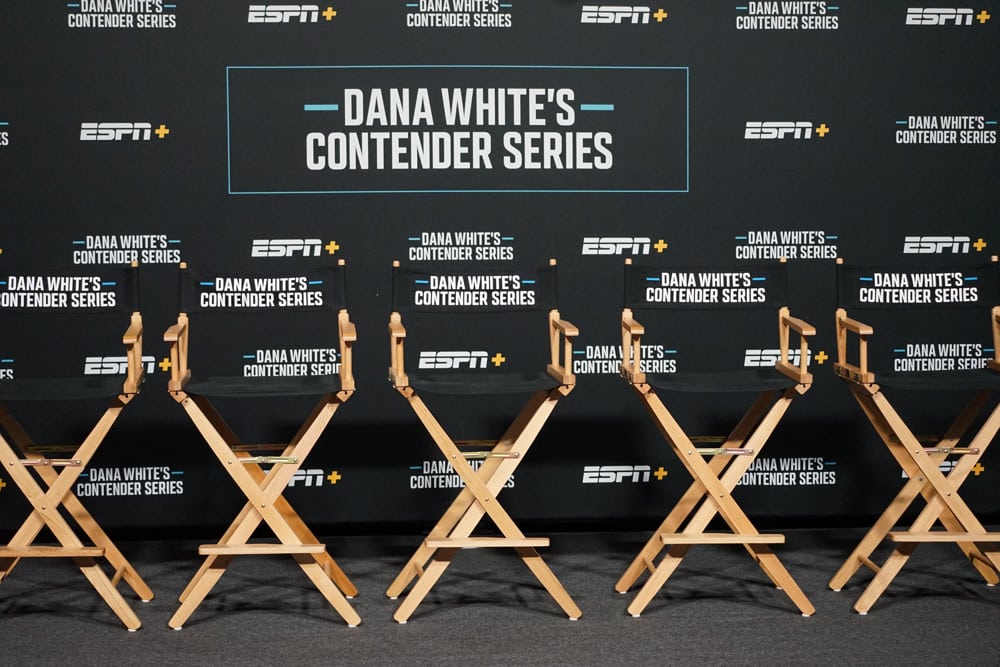 Week 8 of Dana White’s Contender Series is right around the corner. This edition includes a few familiar faces. Two fighters will be making their return to the show in hopes of finally getting that contract. Another weighed in for a bout earlier in the season but had the bout scrapped due to an opponent’s weight miss. Which of these fighters will punch their ticket to the biggest promotion in the world?

As I mentioned when I broke his fight down earlier in the season, Farid Basharat is not quite what his brother is. He has a lot of the same style though. He has good footwork and patient striking. His grappling is the real moneymaker, with both solid control and submission skills. The difference is that he can sometimes be a bit too easy to hit, which you can certainly not accuse his brother of.

Despite this fact, I’m not particularly concerned about him in a fight with Allan Begosso. Begosso fights with his hands pretty high and is easily backed up with feints. Both of those things don’t bode well against a guy with three rear-naked chokes in his last three fights. It’s also not great that Begosso has a tough time circling off of the cage. As a result, this should be a showcase fight for Basharat and Dana White should love what he sees on the mat.

Mario Souza is the first fighter making his return, but it’s not his second time on the show. Souza has actually had opportunities to impress Dana in each of the last two years. In 2020 he beat Mariusz Ksiazkiewicz, which earned him a 2021 shot against Chidi Njokuani, which went less well. In both of those fights, he showed that he has some really sharp striking. However, in each of them, he showed some suspect takedown defense. Ksiazkiewicz took him down four times and, despite being a striker, Njokuani even got it done on the mat.

There’s not much worse of a matchup for a guy who has had issues with being taken down. Ikram Aliskerov is a sambo beast. His only loss came in 2019 against Khamzat Chimaev. In that fight, Khamzat worked hard for a takedown for the first few minutes, but ultimately had nothing that could get Aliskerov down. It’s not just grappling defense for Aliskerov either. He’s shown against UFC veterans Nah-shon Burrell and Denis Tiuliulin that he has what we come to expect from fighters in that part of the world. He chains the takedowns together so well and is damn near impossible to get up against. I expect this to be on the mat quickly and over shortly thereafter.

Aliskerov gets a unanimous decision victory in the final fight before the main card gets underway.

There’s never been a fighter that is more clear about what he wants to do than Trevor Peek. Any attempts to get him into the clinch and he panics and pushes his opponent away frantically. That’s because all this guy wants to do is bang. He throws hands and legs with 100% power every time. Is it the most technical or nuanced game? Definitely not. But is it something that Dana White is probably salivating over? Absolutely it is.

There is plenty to worry about with Malik Lewis against that kind of game plan. The first is that Lewis has some pretty solid grappling. He has a nice double leg and uses good head pressure to set things up against the cage. All of these things are things that Peek has had trouble with in the past. Yet, with such a clear path to victory, I’m still taking Peek here. The reason is that Lewis also has a bit of a gap in his game. His striking seems a little herky-jerky from time to time. Ultimately, I think it’s mostly a means to an end (his wrestling) at this point. When fighting a guy with abnormally good power, I think the more complete fighter is still going to find himself on the wrong end of a big power shot.

The size discrepancy is going to be a tough one to overlook in this fight. Marnic Mann will be giving up six inches of height. Even though we don’t have reach numbers yet, I imagine the number there will look nearly as bad too. That kind of size difference is obviously not an automatic fade, but it isn’t a good sign when you consider what these two look like stylistically.

Bruna Brasil has a karate-style stand-up game – low hands, light on the feet, and sharp with the kicks. She keeps distance really well and never overcommits. Mann is all about takedowns. She uses really wide shots to wade into range and get head and arm takedowns against the cage. She’s pretty solid once on the mat, but I really worry that she’ll never get there. Brasil will just be too hard for her to catch and, on top of that, Brasil has shown some decent takedowns in her past as well. She has a nice inside trip that she uses. If this takes place on the feet, Mann will likely put up a striking accuracy number worse than any before on Dana White’s Contender Series.

Brandon Lewis is the second fighter getting his second shot at impressing Dana. In his first go-round, he took a loss against Mo Miller, largely due to some really suspect takedown defense. Granted, Mo Miller is a solid wrestler, but the part that concerned me more about Lewis was his inability to find the range. He’s a pretty stocky bantamweight and loves leg kicks. While those things can co-exist, they haven’t particularly well with Lewis. When he does find range though, those leg kicks do damage and he has some decent hands – especially his work to the body.

I’m taking Daniel Marcos here, but not with very much confidence. He has some real hiccups that give me concerns. The first of which is the fact that, when pressured, he dips his head straight forward. The second concern is that he hasn’t fought in almost three years. Still, I’m leaning Marcos’s way here thanks to some of the things he does right. He cuts off the cage with solid footwork. He has some nice spinning attacks – mostly with his legs. When he lets his hands go, it can get a little wild, but has nice power to it. So even though he has a lot of question marks around him, I think he should be able to frustrate Lewis with distance management and volume.