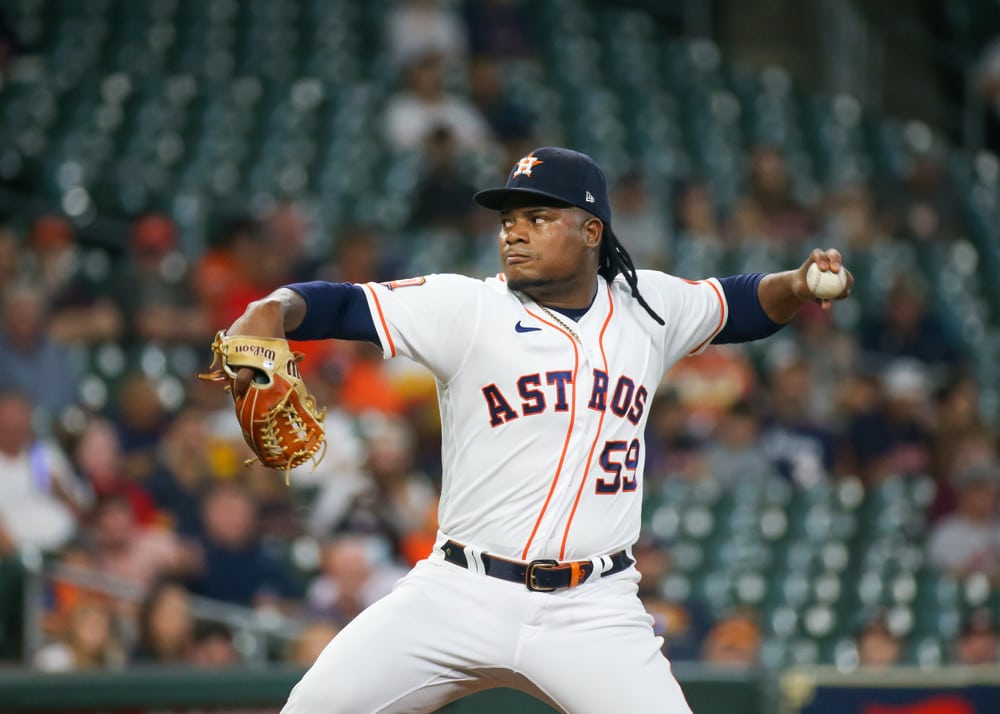 HOUSTON, TX – SEPTEMBER 06: Houston Astros starting pitcher Framber Valdez (59) throws a pitch in the top of the first inning during the American League game between the Texas Rangers and Houston Astros on September 6, 2022 at Minute Maid Park in Houston, Texas. (Photo by Leslie Plaza Johnson/Icon Sportswire)

Everybody loves the late season push. We head down the home stretch that is September and into early October and finally we start to see some clarity. But while we might have an idea who’ll be duking it out for post-season supremacy in the American League, who has the odds that are ripe for the picking? We’ve dug into what the odds show late in the season and given you the lowdown on every division.

The Astros got out to an astronomical lead early in the season and never looked back. However, the Mariners solidified themselves as a bona fide number two team in the American League West. As a result, they’re all but set to end a two-decade long playoff drought.

The Astros are the odds on favorite to win the World Series in the AL and for good reason. Heading into Friday’s slate of games, they hold a double-digit lead over the Mariners. They have the best record in the league and are the only team that hasn’t been through some kind of gnarly slump.

A lot of the thanks for that run can go to the consistent pitching staff. All but 17 of their starts have come from the same five starters. It’s worth noting that 12 of the other starts were traded to the Braves in the form of Jake Odorizzi. Anchored by yet another Cy Young caliber season from Justin Verlander, the staff puts them in every game. In fact, not a single one of their starters has a 4.00 ERA or over.

It’s for all of those reason why I really like the Astros as a pick to win the American League again. It’s tough to imagine, even with an injury or two, any other AL team getting through a series against them. +160 is a little bit of a stiff price there, but there’s good reason to get chalky here.

The Mariners may be set to make a different kind of history. It’s not from repeating as the AL champs, as their division-mate just might. It’s just by being there. 20 straight seasons Seattle fans have seen the playoffs come and go without their beloved Mariners. However, the team, including the front office gave the city something to be excited about this season.

By calling up Julio Rodriguez early, the Mariners brass gave people the hope that they’d be going for it in 2022. Not only did that move pay off, but they didn’t rest on their laurels. They went for it at the trade deadline and got Luis Castillo – perhaps the best pitcher available.

Still, with all the excitement out there on this team, none of the odds available are really all that tempting. They just don’t have the power to take out one of the top teams should it come to it. So despite all these fat numbers, this is just a pass.

AL Central: Guardians Look to Hold on in AL’s Only Race

The AL Central may be the only race in the entire league. Just a couple games up heading into the weekend, the Guardians look to hold off the Twins and the White Sox. Sadly, the division winner will still probably have the worst record in the playoffs.

I think the Guardians do hold on to that top spot heading down the stretch. That’s mostly because they’re doing it with an offense that resembles decades ago and it seems to be working. They only have out-homered the Tigers on this season, which would seem like a death sentence. However, they’re also the only team that hasn’t struck out 1,000 times yet this year. You can thank the crazy low strikeout rates from Jose Ramirez, Steven Kwan and Myles Straw.

Still, at the end of the day, nobody is running to the books to bet on the team that’s winning the league’s worst division. Certainly not when they’ve seemingly been sellers for the last few years and are winning the division anyways.

Nothing gives me all that much reason to think that the Twins can pull ahead here. Apart from Sonny Gray, and all 1.9 of his WAR, their pitching staff hasn’t given anyone reason to believe in them. No other starter has cracked 1.0 WAR on the season.

Pass on anything here.

The White Sox might actually have a better chance than the Twins if you just look at them on paper. They do at least have a couple of starters in Dylan Cease and Johnny Cueto who are putting up numbers. However, you just have to fade the team who’s manager is asleep at the helm and the team continuously underperforms on their projections.

Even the long odds don’t tempt me here.

Despite the Yankees easily taking the division (as long as this ‘collapse’ isn’t prolonged), the division is filled with plenty of playoff teams. Seemingly, the Rays and the Jays should be in. The Orioles flirted with the idea, but selling at the break has them enough games out now that I don’t even give them a real thought.

It’s wild for me to see the Yankees at the same odds as the Astros. While they do have a powerful lineup led by Aaron Judge, they also had an atrocious August. In a month where they lost 18 games, they put together four different losing streaks of at least three games. Two of those four streaks were entirely to divisional opponents. The final one was to teams that are so out of the playoff picture it isn’t funny.

It’s still fair to be high on the Yankees. After all, they lead the MLB in home runs and are fourth in runs. However, with the skids they’ve been on, all of which was right after trading Jordan Montgomery, you can’t sleep at night laying these odds.

Even though the attention that was on them preseason has sort of waned, the Blue Jays yet again have a phenomenal offense. They’re 3rd in the AL in homers behind only the Astros and the Yankees. They’re second in runs in the AL – actually ahead of the Astros. Plus, they’re number one in slugging in the whole league.

All of this is thanks to the fact that they aren’t a long ball dependent team – even though they get a ton. They have five different guys on their roster with 25 doubles already, including one who has played just 109 games (Teoscar Hernandez).

Their pitching may not hold up as well as the favorites, but if you’re looking for a bargain bin darling, the Jays are definitely the play here. If someone is to sneak past the Astros and the Yankees, at 8-to-1, I’d have my money on them.

The Rays always seem to do it in the most awkward of ways. Especially with Wander Franco going down, they never seem to have anybody even sniffing at the MVP race. What they do have is a seemingly endless list of guys with 1.0 or 2.0 WAR. I mean, would you have guessed that Kevin Kiermaier is worth 1.0 WAR this year?

However, at the end of the day, while the Rays will be in the playoffs, I can’t get behind a team like that. They’ve surprised us before, but the AL just has too much firepower this year. At least to cede it to a team with Taylor Walls sporting the third highest hitter WAR.

For all the MLB content you need, don’t forget to check out the MLB Gambling Podcast. They guys give you the breakdown of the full slate of games each and every day.