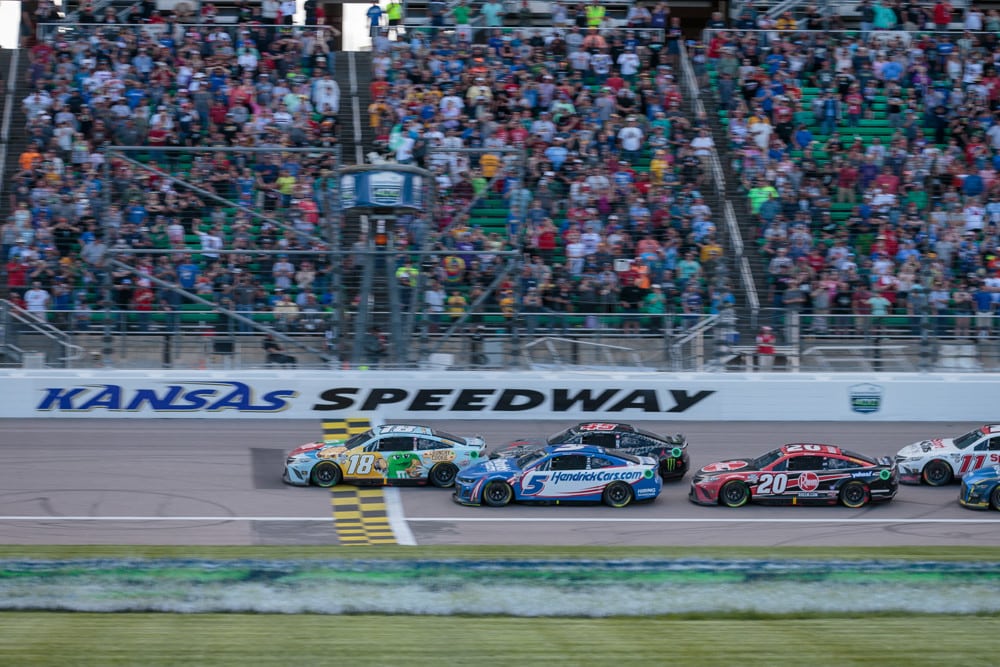 Get ready for the second race of the playoffs as NASCAR returns to Kansas Speedway for the Hollywood Casino 400. This 1.5-mile asphalt track has been a staple on the NASCAR schedule since its opening back in 2001. Even with it being a relatively new addition to the circuit, Kansas has hosted great winners like Jeff Gordon, Tony Stewart, and seven-time Cup Series Champion Jimmie Johnson. Five drivers currently share the record for career wins at the track. They include the aforementioned Jeff Gordon & Jimmie Johnson as well as current drivers, Kevin Harvick, Denny Hamlin, and Joey Logano. Most recently, Kurt Busch put his #45 Toyota in victory lane for the AdventHealth 400 back in May.

This week’s NASCAR DFS slate is an interesting one and owners should be asking themselves a number of questions when setting their lineups. Will the Chevrolet’s bring their raw speed as they have many times this season? Can Toyota dominate as they did back in May? Does Ford have what it takes to get to victory lane?

Denny Hamlin is a driver that NASCAR DFS owners should pay up for. In 28 races at Kansas Speedway, Hamlin has three wins, 10 top 5s, and 11 top 10s. The driver of the #11 Toyota has an average finish of 13.7, which is the 5th best mark amongst active drivers. Denny has finished inside the top five in four of the last six races in Kansas City, including earlier this season. The Toyotas were very strong at Kansas earlier in the season and I expect the same. That’s why Denny Hamlin is a driver to pay up for in the Hollywood Casino 400.

Kyle Larson is also a driver to pay up for in the Hollywood Casino 400. Larson has 15 starts at Kansas and in those starts he’s got a win, five top 5s, and seven top 10s. Even more impressive, Kyle Larson has back-to-back top two finishes at Kansas. That includes a 2nd place finish earlier this season where he led 29 laps and was a contender all day. Hopefully the engine issues are behind the #5 team because Kyle Larson is a driver to pay up for this weekend at Kansas Speedway.

Following an abysmal race at Darlington, Chase Elliott is a driver to pay up for at Kansas. In 13 races at Kansas Speedway, Elliott has a win, six top 5s and eight top 10s. The driver of the #9 Chevrolet boasts an 11.2 average finish at Kansas, which is second best amongst active drivers. In the last three races at Kansas Speedway, Elliott has finished in the top five two times. Looking back at the race at Kansas earlier in the season, Elliott finished 29th but that doesn’t tell the whole story. Chase led 10 laps and was in the top 10 in both stages. Chase Elliott needs a bounce back race this weekend and that’s why he is a driver to pay up for in the Hollywood Casino 400.

As earlier stated, the Toyotas should return to Kansas with a lot of speed and therefore, Christopher Bell should be considered for DFS lineups. In five races at Kansas Speedway, “C Bell” has one top five and three top 10s. His average finish of 14.8 is 7th best amongst active Cup Series drivers. Back in May, the driver of the #20 Toyota qualified on the pole and led 37 laps en route to his 5th place finish. Christopher Bell is turning into a Championship Four dark horse and his run starts at Kansas. Christopher Bell should definitely be considered for DFS lineups this weekend.

Another Chevrolet driver to keep an eye on and consider for NASCAR DFS lineups is Alex Bowman. The driver of the #48 Chevrolet has been in 14 races at Kansas and has two top 5s and six top 10s. Back in May at the AdventHealth 400, Bowman finished in the 9th position and even scored stage points in Stage 1. I expect the Toyotas and the Hendrick Motorsports Chevys to be battling and that’s why Alex Bowman should be considered this weekend.

Brought home a solid top 10 finish last night in the Ally 48. Looking forward to to building off this momentum at Kansas next weekend 👊🏼 #Rally48 pic.twitter.com/oVJ5ARKXV2

Driver to Stay Away From:

A driver to stay away from in the Hollywood Casino 400 is Michael McDowell. The driver of the #34 Ford has never scored a top ten in his 22 visits to Kansas Speedway. McDowell’s average finish of 28.1 is 2nd worst amongst active NASCAR Cup Series drivers. Earlier in 2022, McDowell started 25th and finished in the 23rd position. There isn’t a lot of hope for Michael McDowell at Kansas and that’s why he is a driver to stay away from.