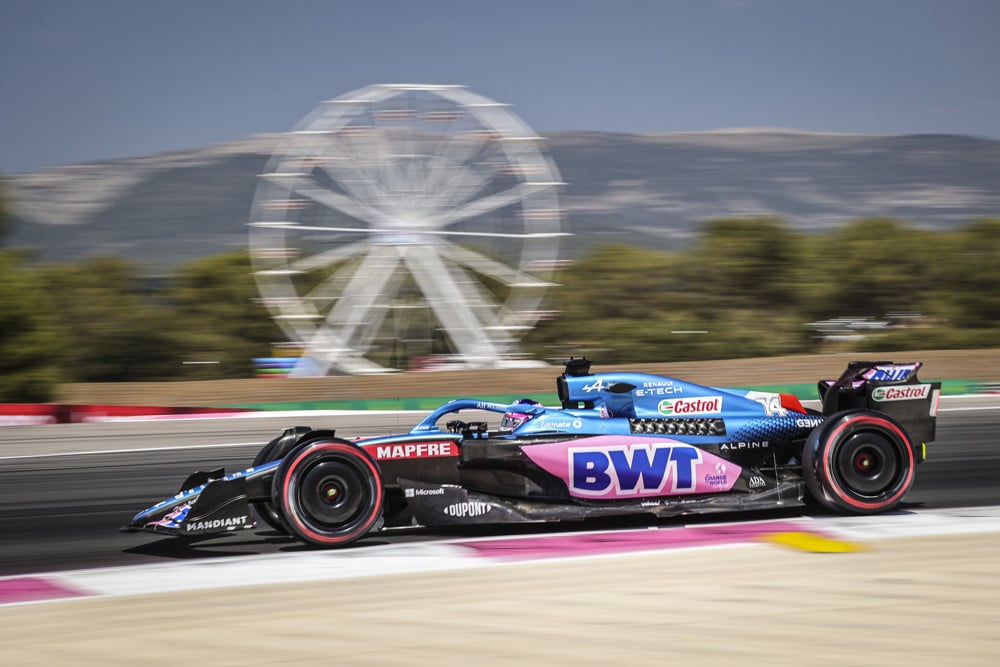 14 ALONSO Fernando (spa), Alpine F1 Team A522, action during the Formula 1 Lenovo Grand Prix de France, French Grand Prix 2022, 12th round of the 2022 FIA Formula One World Championship from July 22 to 24, 2022 on the Circuit Paul Ricard, in Le Castellet, France. (Photo by Paulo Maria/DPPI/Icon Sportswire) ****NO AGENTS—NORTH AND SOUTH AMERICA SALES ONLY****

This week it’s off to the dunes of North Zandvoort, Netherlands, nestled near the North Sea coastline, to Circuit Zandvoort. The 2021 season marked the first time back for the revived Dutch Grand Prix after not running the event since 1985. The 2.646-mile course will host the series for 72 laps. Last season’s event was won by eventual champion Max Verstappen, who grew up about 2.5 hours away in Hasselt, Belgium.

The long summer break didn’t seem to change many things. Despite a grid penalty due to a power unit change that had Max Verstappen start in 14th, it didn’t take long for the 2021 champion to cruise through the field and take the point. Once he did there was no looking back. Verstappen’s 9th win in 14 rounds of the 2022 season was possibly the most dominant yet. A wild lap one crash took out 7-time champion Lewis Hamilton after a tangle with Fernando Alonso.

How to Watch: ESPN/Watch ESPN
When to Watch: Sunday, September 4th, 9:00 A.M EST

Max Verstappen checks in at a salary of $18,000. To get a ton of relief in the captain spot, I’m again going to check down to George Russell. As the sixth-highest-priced driver on the slate, he offers you the second highest average points on the season. As we talk about almost weekly on the F1 GAMBLING PODCAST, George has been one of the most consistent this year. He has a top-6 finish in every race but one, and a podium in two of the last three.

This is like the free square in bingo. It’s just there and you have to take it. If you want to be contrarian in a bigger contest you are trying to take down, then you should play some lineups without Max. In your regular cash games or head-to-head matches though, don’t overthink this. The Dutch driver is a huge favorite (-200) to win the weekend. He’s also won 9 of 14 races so far. I can’t make much more of a case than that to slide him into your Dutch Grand Prix DFS lineups.

Alonso and the Alpine F1 Team have run well in the last few races. If you are looking for someone in the mid-tier range Alonso offers value. Coming off a fifth-place finish in last week’s Belgian Grand Prix, Alonso has scored 14 fantasy points or more in four of the last seven events. Despite the announcement that the 41-year-old two-time world champion will leave Alpine and replace fellow champion Sebastian Vettel with Aston Martin in 2023. The team is still focused on getting everything they can with Alonso in 2022.

A little bit of history on the #RoadToF1…

To finish out your lineup you almost always have to go bargain bin shopping. This choice can be the difference in how your entire DFS day pans out. None of these options are super appealing. However, they are still very important. The Alfa Romeo rookie and first driver from China to race in the F1 championship series has put together a couple of good races. A 14th place last week with 8 fantasy points and 13th with 6 fantasy points the race before is just enough to make the difference at the bottom of your Dutch Grand Prix DFS lineup.

It’s hard to make the case for any other Constructor in this spot. Playing Mercedes’ didn’t work out well last week but only because of the first lap wreck that cost Lewis Hamilton his day. However, before that, they’ve been the ones with the consistency week in and week out in both cars. They also aren’t absorbently priced (Red Bull $12,000/Ferrari $11,500).