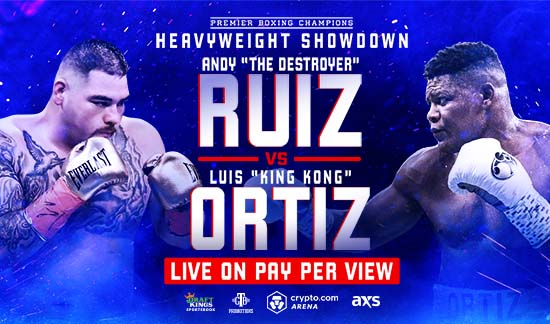 Saturday night, Premier Boxing Champions will showcase a heavyweight bout between two of the top heavyweight boxers in the world. The 10-round non-title fight between Andy Ruiz and Luis Ortiz will take place in Los Angeles, California. Boxing odds on these fights, with picks and bets from the Sports Gambling Podcast Network, are coming up, DING DING!

Luis Ortiz’s only two career losses are to Deontay Wilder via knockout. In both fights it was widely viewed that Ortiz was ahead until the great American heavyweight landed his knockout blows. Against opponents not named Wilder, Ortiz shows great power with average boxing skills, as he’s slowing down with age. A win against Ruiz would set Ortiz up for a trilogy fight against Wilder.

What a knockout from Luis Ortiz. Andy Ruiz Vs Luis Ortiz next pic.twitter.com/jj7MoDzH9N

Andy Ruiz is a slippery former world champion. Ruiz has a notorious reputation for not training seriously and fighting out of shape. But this time, Ruiz looks like he cleaned himself up and has slimmed down in a good way. He doesn’t have the one-punch KO power, but when ‘The Destroyer’ gets inside he can pile on combinations, dealing his best damage. This is Ruiz’s first fight in 16 months and second tilt since 2019. Ortiz will be Ruiz’s second fight with his new trainer, Eddy Reynoso, in his corner.

The key to this matchup is how conditioned will Andy Ruiz be entering this fight. If he is in good fighting shape I expect him to bounce in and out of the pocket. Combinations down low to the body of the 43-year-old Luis Ortiz will help Ruiz tremendously. However, if Ruiz’s pace begins to slow in the mid-to-late rounds, Ortiz could land his ultimate equalizer and book another payday with Deontay Wilder, who he has unfinished business with. My thought process is that regardless of endurance, Ruiz has a great chin and it’s evident if you watch the Anthony Joshua fight. I think Ruiz will get damaged but win enough rounds throughout the fight on the judges’ scorecards to win the match.