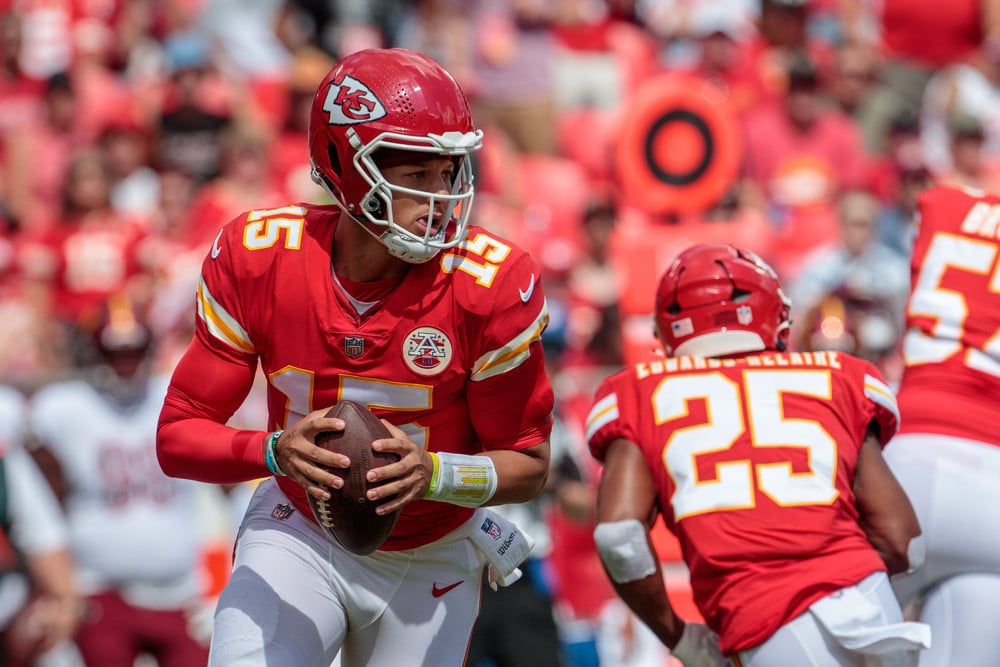 The AFC West enters the 2022 season as the best division in football. They are the only division that has all four teams projected with a winning season. The Kansas City Chiefs have won the division every year since 2015 under Andy Reid. Last year the Las Vegas Raiders made the playoffs as a Wild Card team after a dramatic Week 18 victory over the Los Angeles Chargers.

In Denver, Russell Wilson comes to the AFC West after being traded away from Seattle. The West also has two first-year head coaches in Josh McDaniels (Raiders) and Nathaniel Hackett (Broncos). Let’s take a look at these AFC West Win Totals and give out the best bet division winner!

The Kansas City Chiefs enter the 2022 season as the favorites to win the AFC West yet again. They are coming off a 12-5 2021 season that ended in disappointing fashion in the AFC Championship game. They blew a double-digit lead to the Cincinnati Bengals at home, failing to make the Super Bowl for the first time in three seasons.

The Chiefs were inconsistent in 2021 offensively behind the trio of Patrick Mahomes, Tyreek Hill, and Travis Kelce. However, Kansas City was able to manage the 3rd best DVOA Offensive Rating in 2021 due to a strong 2nd half of the year finish. Mahomes was able to throw for over 4,800 yards and 37 touchdowns but threw a career-high 13 interceptions as well. His two top options were Hill and Kelce, both of which eclipsed 1,000 yards receiving.

The major offseason move for Kansas City was the decision to move on from Tyreek Hill when they traded him to Miami. The Chiefs used that trade return to add to their defense in the draft. They added a pair of 1st round draft picks on the defensive side with CB Trent McDuffie and DE George Karlaftis. The defense also elected to go with Justin Reid to replace Tyrann Mathieu too. Additionally, on the offensive side, the Chiefs added a pair of Wide Receivers in JuJu Smith-Schuster and Marquez Valdes-Scantling.

The Chiefs come into this season with expectations still high but will have more of a challenge this season than in years past. The division is the best in football and sets up a gauntlet between these four teams. However as long as Andy Reid and Patrick Mahomes are in Kansas City together, then I will continue to ride with them. I like the Chiefs to ultimately win the division for 7 in a row under Reid!

The Los Angeles Chargers enter this season after a disappointing end to 2022 finishing 9-8 and on the outside of the playoffs. They were knocked out by their rival, the Las Vegas Raiders in the final game of the regular season. Brandon Staley was known for his aggressive coaching style when going for it on multiple 4th downs throughout the 2021 season. Some of those decisions backfired, and as a result, he’s on the hot seat in 2022 with a loaded roster.

The Chargers are led offensively by their third-year quarterback, Justin Herbert. 2021 was a breakout year for Herbert, where he threw for over 5,000 yards and 38 touchdowns. The Chargers also had two receivers who had over 1,100 yards each in Mike Williams and Keenan Allen. Although the defense was inconsistent in 2021, the main issue was that they struggled to stop the run.

Los Angeles addressed their defensive needs in the offseason though. They went out in free agency and made a splash with the signings of CB JC Jackson and DE Khalil Mack. Furthermore, they added LB Kyle Van Noy and CB Bryce Callahan who have had solid careers. In the draft, they invested for the second straight year in their offensive line drafting of Zion Johnson.

The Chargers have arguably the best roster in the division on paper, but they have yet to put it all together. Herbert and the offense should remain a Top 5 DVOA offense in 2022. This team could really make a jump if the defense can be improved. I like the Chargers to challenge the Chiefs, but ultimately come up short and be a Wild Card team!

The Denver Broncos come into 2022 starting a new era. They were arguably the biggest winner in the offseason with the trade for Russell Wilson. Denver finished last season 7-10 and made a coaching change moving on from defensive-minded Vic Fangio, and replacing him with Nathaniel Hackett.

The Broncos will be different offensively in 2021 under Hackett and the upgrade to Wilson at Quarterback. Last year they relied more on their 1-2 punch that included Javonte Williams and Melvin Gordon. Denver has also invested in their Wide Receiver position in recent drafts with Courtland Sutton, Jerry Jeudy, and KJ Hamler. The hope for the Broncos is that these players will all make a jump in 2022.

The Wilson trade was the headline of the Denver offseason, but the team made other moves to improve their roster as well. The Broncos were able to add to the frontline of their defense with the additions of Randy Gregory and DJ Jones in hopes to improve their pass rush. They also added to their offensive line too with the signing of Billy Turner.

The expectations are to win now in Denver with all these off-season moves. This is another AFC West team with a very good roster, but a rookie head coach who is unknown. I like Denver to improve this season, but underperform compared to some of their lofty expectations, and be a fringe Wild Card team in 2022.

The Las Vegas Raiders come into this season with the longest odds to win the division, despite their win total being set at 8.5 wins. The Raiders were able to tune out all of the off-the-field distractions last year to make the playoffs. Vegas needed to win their final 4 games in order to finish 10-7, which resulted in a surprise playoff berth. In the playoffs, they came up just short against the Bengals in the Wild Card round. As a result, Josh McDaniels takes over the sidelines in his second stint in the AFC West as a head coach.

Derek Carr threw for a career-high 4,800 yards in 2021 with 23 touchdowns as well. His go-to target was Hunter Renfrow, who had a career year with over 1,000 yards and 9 touchdowns. This season Renfrow will slide over to the #2 option with the addition of Davonte Adams. On the defensive side of things, they were led by their leader Maxx Crosby, who had 8 sacks and 13 tackles for loss,

The offseason was highlighted by the trade for Davonte Adams. Adams is set to reunite with his former college teammate, Derek Carr, who should have quick chemistry. The Raiders also were able to sign DE Chandler Jones and trade for CB Rock Sa-Yin to help their pass defense.

The Raiders have not made the playoffs in back-to-back seasons since 2002. They have an upgraded roster, but issues on the offensive line still remain. Although they have a talented roster, their roster still remains the 4th best in the division. I beileve the Raiders will miss the postseason in 2022.

As voted by his peers. @tae15adams earned his respect as No. 7 in the #NFLTop100 😤 pic.twitter.com/xujKJBtAAH

Thanks for checking out this AFC West Win Totals article and keep a look out for more betting content coming out on a daily basis from SGPN.