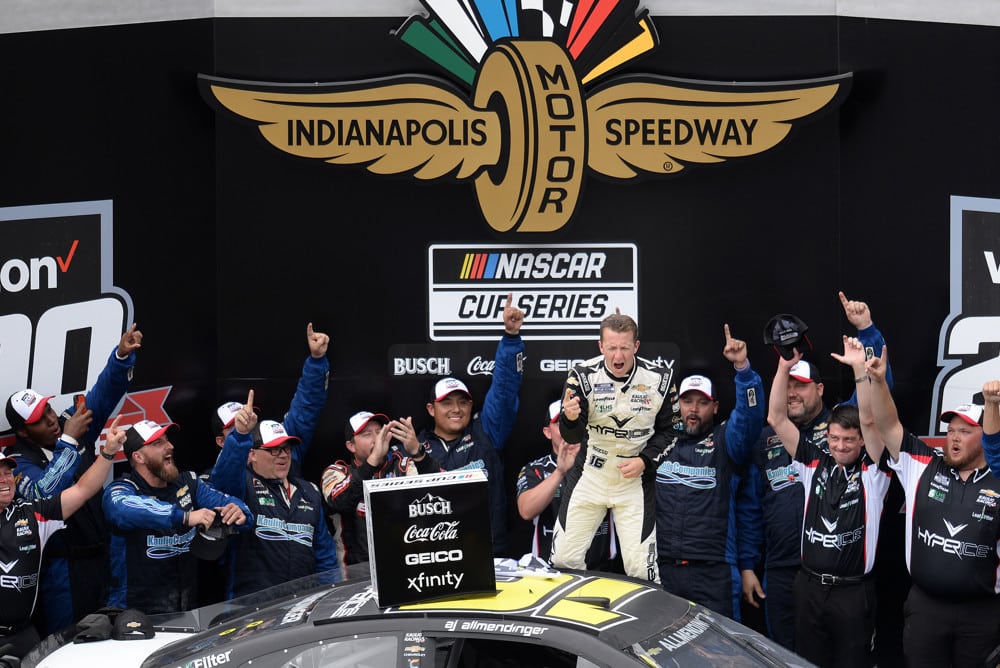 Get your NASCAR DFS lineups ready as NASCAR heads to the Indy Road Course for the Verizon 200. This 2.439 mile asphalt and brick track is located in Speedway, Indiana and is the highest-capacity sports venue in the world. Built back in 1909, Indianapolis Motor Speedway is more famous for the Indy 500 raced on the 2.5 mile four banked turn, but beginning last season, the “Grand Prix Road Course” is what NASCAR has raced on. Having hosted only one race in the Cup Series, it is still a relative unknown amongst the drivers. Last season, saw AJ Allmendinger of Kaulig Racing get to victory lane for the organization’s first win.

This week’s NASCAR DFS slate is pretty interesting for the 2nd trip to the Indy Road Course. There are some questions you should be asking yourself when setting your lineups this week. Will Chevrolet continue their dominance of the road courses? Can Toyota figure out something and return to the road course with some speed? Will Ford put a race together and get some of their cars up to the front?

If you thought Chase Elliott wasn’t the first driver to pay up for, then you haven’t been paying attention. In the last five races, Elliott has finished 1st, 2nd, 1st, 2nd, and 1st. That’s three of his four wins and five of his 15 top 10s this season. At the road courses this season, Chase has yet to visit victory lane, but he does have a top ten in all three races. Most recently, Elliott scored a 2nd place finish at Road America. Elliott also boasts an average finish of 4.7 on the road courses in 2022, 2nd best average in the Cup Series. Last season, Chase Elliott finished 4th place on the Indy Road Course and led 14 of 82 laps. Recent success says Chase Elliott is definitely a driver to pay up for in this weekend’s Verizon 200.

This year we’ve seen a new Ross Chastain on the race track. On the road courses this season, the “Watermelon Man” has a win (COTA), two top 5s and has finished inside the top 10 in all three races. The driver of the #1 Chevrolet has the best average finish on the 2022 road courses of 4.0. This season, Chastain has the most top 5s with 10 and in currently 2nd place in the Cup Series standings. Looking back at last year’s Indy Road Course race, Ross struggled. He finished 29th in fact, but that wasn’t the “new” Ross Chastain in this new car. He’s really taken to the Next Gen Car and it fits his aggressive driving style. As long as Denny Hamlin doesn’t ruin his day, Ross Chastain should be a driver to pay up for at the Indianapolis Road Course.

Tyler Reddick is a driver who should pay up for your Verizon 200 NASCAR DFS lineups. In the three road courses this season, Reddick has scored win (Road America) and recorded two top 5s and two top 10s. His average finish on the road courses this season is 13.7, which is 11th best amongst the Cup Series drivers. Looking at 2022 as a whole, the driver of the #8 Chevrolet has the one win, six top 5s, and eight top 10s. At the Indy Road Course in 2021, Reddick finished 21st, but that was not indicative of his day. He won both Stage One and Stage Two and was looking like one of the stronger drivers of the day leading six laps. The stats say Tyler Reddick should be a driver to pay up for.

Ford hasn’t had the best season as a whole, but rookie Austin Cindric should still get consideration at the Indy. In the three road course races this season, Cindric has two top 5s and has finished inside the top 10 in every race. Austin’s average finish of 6.7 on the road courses in 2022 is the 3rd best mark amongst the drivers. Looking at 2022, the driver of the #2 Ford has put together a solid rookie campaign. Cindric has one win (Daytona) and six top 10s, four of which have come in the last six races. In 2021, Austin Cindric scored a 9th place finish at Indy in the Cup Series and went to victory lane in the Xfinity Series. Needless to say, he likes this road course and you should like Austin Cindric in your Verizon 200 DFS lineups.

Another Ford driver to consider this weekend at Indy is Chris Buescher. Buescher has quietly put together a solid season on the road courses. He’s recorded one top five and two top 10s with an average finish of 9.7. That is 7th best among the Cup Series drivers. 2022 hasn’t been that kind to RFK Racing or the driver of the #17 Ford. Buescher has one top five and five top 10s this season. Last season on the Indy Road Course, Chris Buescher finished 12th, but again that was in the Gen 6 Cup Series car. In the Next Gen Car, he has seemed to step up his performance on the road courses and should be given consideration this weekend.

The driver you should stay away from this weekend is Ricky Stenhouse Jr. Stenhouse has not shown up on the road courses in 2022. His best finish on the road course is 19th at Road America and he has an average finish of 27th, which is 6th worse in the Cup Series. As for the entire 2022 season, the driver of the #47 Chevrolet has one top five, five top 10s, and has not finished inside the top 15 in the last seven races. Last year at the Indy Road Course, Stenhouse did finish 11th but that was only after the “turtle” bumps took out a number of cars in the field. Chevrolet has been on top at road courses this season, but Ricky Stenhouse Jr is one Chevy driver to stay away from this weekend.