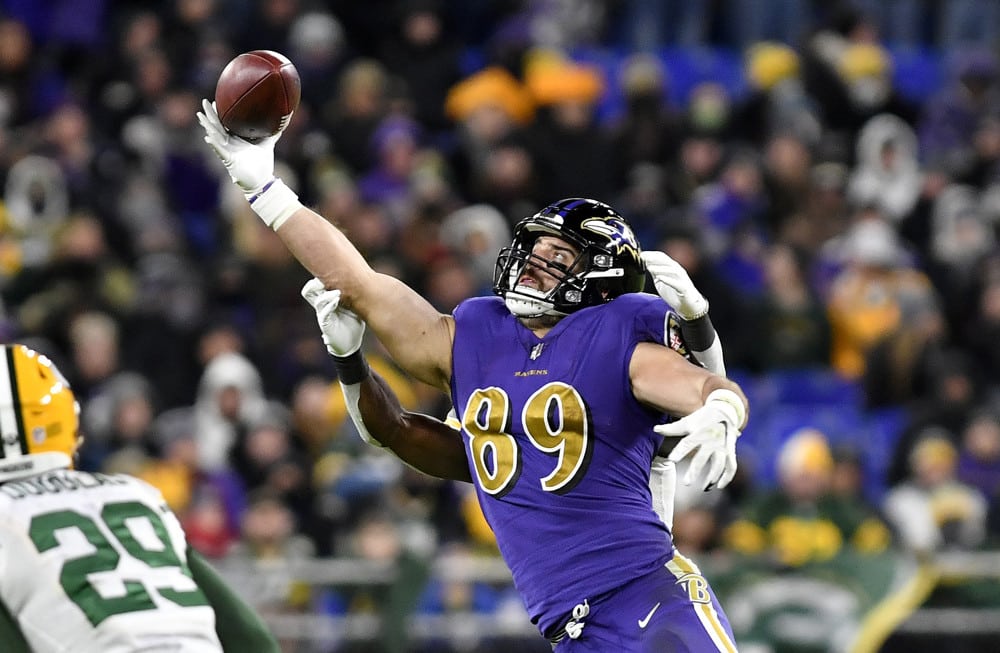 So do you expend all your energy going for TE1 or TE2, or do you just wait because you know the difference in fantasy points and all?

Unless you get the fabulous four early, maybe you should wait on drafting a tight end?

Making tiers for tight ends is iffy at best after the first tier.  So, let’s be patient and try to find that diamond in the rough.

Travis Kelce, Kansas City Chiefs: Kelce has been a TE1 or TE2 every year since 2016. This season there will be no Tyreek Hill which releases 159 targets and a 25.1% target share.

KYLE PITTS WITH ONE HAND. #NationalTightEndsDay

George Kittle, San Francisco 49ers: Kittle in Tier 2 is less about Kittle being great than about Kittle being available. That he is great, yes; since 2018, he has led all tight ends in yards after contact (1171), broken tackles after the catch (58), and yards after the catch per reception (7.7). Anticipating that Trey Lance will be under center this season, last season, in two games with Lance, Kittle’s stats: Week 4, he had 11 targets, four receptions, and 40 yards; in Week 17, he had one reception and 29 yards.  In the last three seasons, Kittle has played 14g, 8g, and 14g, respectively.

Darren Waller, Las Vegas Raiders: Waller missed five games last season with injuries. This season he will have a new coach, Josh McDaniels, and wide receiver Davante Adams will be a presence on the field. The bad news is target hog Adams on the field. The good news is that McDaniels utilizes his tight ends effectively in past offenses.

Dalton Schultz, Dallas Cowboys: Schultz finished last season with eight touchdowns on a 16.4% target share. This season the Cowboys will be without Amari Cooper (18.8% target share) with 103 targets and uncertainty about when Michael Gallup will return from his September injury.

Dawson Knox, Buffalo Bills: Knox went from a 54% catch percentage to a 69% catch percentage last season.  He saw 19 red zone targets catching 12 but only had a 16.7% overall target rate (28th among tight ends).  The question is can Knox sustain his nine touchdowns?

Zach Ertz, Arizona Cardinals: DeAndre Hopkins will miss the first six games due to suspension. Last season with Hopkins on the field, Ertz averaged 3.3 receptions, 4.3 targets, and 31 yards. Ertz averaged 5.6 receptions, 8.1 targets, and 57 yards without Hopkins. The upside for Ertz (and, let’s face it, the Cardinals as a whole if the last two seasons are any indication) will be the first half of the season. Monitoring preseason to see if Kyler Murray and Marquise Brown resurrect their college connection.

Pat Freiermuth, Pittsburgh Steelers: Who will be under center for the Steelers? Last season Freiermuth saw 20 red zone targets and seven end-zone targets. Freiermuth’s ceiling is limited by who will be his quarterback.

TJ Hockenson, Detroit Lions: Hockenson was limited by injuries, including a broken thumb that kept him out for the last five weeks. This season he will compete not only with Amon-Ra St. Brown and DJ Chark, but when/if Jameson Williams gets on the field, it will limit Hockenson’s 21.0% target share and possibly his 83.8% snap share.

ZACH ERTZ IS A BEAST pic.twitter.com/7mATv6vNLH

AND THEN THERE IS…

Unless you are in a tight-end premium league and are one are drafting in the first half of your draft, it is better to grab your quality wide receiver or running back and come back to the tight end later.

Your “and then there is” tight ends, Hockenson, Kmet, and a hopefully healthy Smith will serve you well.

Let’s see how training camp and preseason iron themselves out.