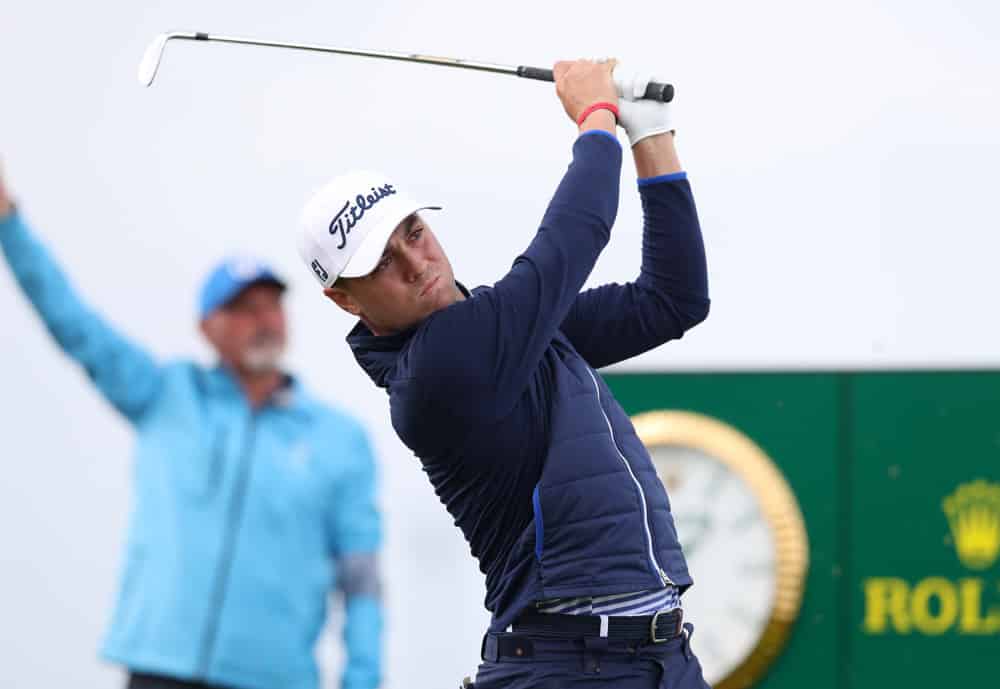 Coffee golf officially makes its debut on the PGA Tour! For the first time, the PGA Tour has partnered with the DP World Tour to co-sanction one of the biggest non-major events in Europe. Stars from the PGA Tour will compete with their DP World Tour peers to try and win the 2022 Scottish Open at The Renaissance Club in North Berwick, Scotland. As always, here is your early deep-dive on the 2022 Scottish Open and a preview of how to bet. In addition, listen below to the Golf Gambling Podcast for more information about golf betting.

As mentioned earlier, this is the first year that the PGA Tour has co-sanctioned the Scottish Open with the DP World Tour. There have been plenty of PGA Tour regulars who annually play the Scottish Open, however. It’s typically a great warm-up to the Open Championship the following week. Notables in the field who have played the Renaissance Club before are Justin Thomas, Jon Rahm, Xander Schauffele, Will Zalatoris Matthew Fitzpatrick, Collin Morikawa, Sam Burns, and Scottie Scheffler.

Other notable PGA Tour stars who will play the Renaissance Club for the first time are Patrick Cantlay, Cameron Smith, Viktor Hovland, and Hideki Matsuyama.

There will be 156 players who compete in the Scottish Open. Based on a quick scan of the field, I estimate that the field is about 60% PGA Tour regulars and 40% DP World Tour regulars. Most of the PGA Tour regulars will be very popular in DFS and betting because there is readily available strokes gained data. But for the DP World Tour regulars, however, there isn’t anything that’s easily obtainable. However, the last three winners of the Scottish Open at the Renaissance Club were not PGA Tour members. As such, gamblers will have to do their due diligence on these players this week.

While Scotland is the birthplace of golf, it did not have a formal national open on the European Tour until 1972. That year, the tournament made its debut at Downfield Golf Club. In 1973, it moved to the home of golf itself, St. Andrews. However, the tournament could not find a television partner after the event. The first edition of the Scottish Open ceased to exist.

A new sponsorship agreement revived the Scottish Open in 1986. The tournament was moved to a week before the Open Championship. It served as the final chance to qualify for the major championship. Since 1986, the Scottish Open has been played at places like Gleneagles, Carnoustie, Loch Lomand, Royal Aberdeen and Castle Stuart. In 2019, the tournament moved to the Renaissance Club in North Berwick, and it has remained there ever since.

The Renaissance Club is a fairly new golf course. Up until 2005, the land on which the Renaissance resides was a 1,000-acre estate owned by the Duke of Hamilton. It also happened to reside right next to the historic Muirfield, site of sixteen Open Championships. That’s when Jacksonville businessmen Jerry Sarvadi, who was dying to build a world-class golf facility of his own, caught wind of it and gave the Duke of Hamilton an offer he couldn’t refuse. After purchasing the land, Savardi brought in Tom Doak to design a brand new 18-hole track.

But there was just one problem though. Savardi coveted a strip of land at the back end of the property that had fantastic vistas of the Firth of Forth. While Tom Doak did a wonderful job recreating traditional Scottish links golf with the canvas he was given, without access to this piece of land, the golf course lacked the significant characteristic of a links golf course – coastal golf. It wasn’t until 2011 that the local environmental authorities gave the green light for Tom Doak to build three new holes on the sand dunes next to the coastline.

Below are a few additional videos to better familiarize yourself with the Renaissance Club:

There are a few notable features of The Renaissance Club that are a slight departure from a true links golf course that doesn’t involve limited access to waterfront views, however. For one, there is some pretty thick and significant rough off the fairways. The rough at The Renaissance Club actually provides for some penalty, unlike some of the whispy fescue rough we see at other places in Scotland. However, the fairways are wide enough that it takes an extreme miss to get into it. It should be noted, though, that the club has recently added some more mounds and fairway bunkers to provide extra challenges off the tee. That might be why the 2021 Scottish Open leaderboard was littered with players who gain a ton of strokes off-the-tee.

Second, while the greens are big and slow per a standard links golf course, they’re severely undulated. While that feature hasn’t necessarily been a criticism for anyone who has written up a review of the golf course, that note is a pretty universal comment of all the reviews. So while the greens provide a big target to hit to, they’ll play smaller due to some severe run-offs off and shelves that pins can be tucked into. However, there are still generous openings to greens that can allow someone to bounce the ball up to them. They just have a little more of a repellant nature for anyone who might slightly miss left or right of their target.

This week isn’t a tournament that one can mindlessly rely on a PGA Tour statistical modeling service. Not only does a little over half the field have long-term strokes gained data to rely on, but there isn’t any ShotLink data available for previous Scottish Opens. And as mentioned earlier, all three winners at The Renaissance Club weren’t PGA Tour members. This is a tournament that one has to do serious homework on.

Let’s first start with some nuts and bolts of the golf course. In 2021, the DP World Tour set up the Renaissance Club to play a little under 7,300 yards. It’s a Par 71 with four Par 5’s and five Par 3’s. Three of the four Par 5’s play over 575 yards, however, the true yardage is wind-dependent. In addition, three Par 3’s play over 200 yards, while the other two play under 170 yards. Finally, five Par 4’s play over 450 yards, four of which play over 475 yards. While it’s only about 7,300 yards, the golf course plays much longer than advertised.

In terms of agronomy, the Renaissance Club features the grass type of choice for Scottish golf – fescue. The greens also run slow per usual Scottish Links characteristics. They also have to run slow because of the severe undulations of the greens. The greens are cut no less than 5 mm in height. To give you an idea of what that means, most PGA Tour greens are cut to 0.1″ in length, or about 2.5 mm. The slowness of the greens will certainly be an adjustment for PGA Tour pros who are used to playing on faster surfaces.

Typically, this would be where I shift our focus to what types of golfers do well at the Renaissance Club. However, there isn’t a skill set chart available from DataGolf at this time to tell us this information. As such, we’ll have to be creative with how we determine why types of golfers you want to target this week.

Let’s start by looking at the Top 15 (and ties) at every Scottish Open at the Renaissance Club and evaluate how these players were performing heading into the tournament:

In 2019 and 2021, there were relatively benign weather conditions. The weather in 2020, however, was really nasty. Due to COVID, the 2020 Scottish Open was played in October. In addition, that tournament didn’t feature many PGA Tour stalwarts. That week it was cold and rainy. As such, it makes sense that in ideal weather conditions the top of the 2019 and 2021 leaderboards featured mostly efficient players tee-to-green, while the 2020 one was more of a mixed bag.

But what components tee-to-green were most valuable? Here’s a case-by-case analysis:

Off-The-Tee: It seems that since 2019, more and more elite drivers finished better at the Renaissance Club. And that’s very apparent in the 2021 tournament. 12 of the 17 players who finished T15 or better were inside the Top 60 in Strokes Gained – Off-the-Tee heading into the Scottish Open on either the PGA Tour or the European Tour. It could be that added bunkers and mounds made it a more difficult test off-the-tee than it was before. That might explain why better drivers fared better at the 2021 Scottish Open.

In terms of the type of drivers to target, while the 2021 tournament saw a significant increase in the presence of longer hitters at the top of the leaderboard, several of these players also demonstrate good control of their tee shots. In 2021, 10 of the Top 17 players who finished T15 or better were Top 100 in either the PGA Tour or European Tour in driving accuracy. And that theme has been consistent in most Scottish Opens at the Renaissance Club. Generally speaking, players who demonstrate good control off the tee were at the top of the leaderboard.

Approach: Several elite iron players finished high at the 2019 Scottish Open. Benign course conditions with most players hitting from the fairway made it target practice. In 2020, bad weather seemed to level the playing field a bit in this department. And in 2021, while there were several strong iron players in that Top 15, better drivers seemed to be more valuable than tremendous iron players for reasons explained above.

Around-the-Green: This category is the most mixed bag of the three. For every tremendous scrambler like Jamie Donaldson, Justin Thomas, Min Woo Lee, and Ian Poulter who finished inside the Top 15, there were just as many guys who were sub-100 in strokes gained around the green in their respective tours. The greenside surrounds, whether it be the pot bunkers and chips off of tight lies onto a severely undulated green, may have leveled the playing field a bit for everyone.

It’s also notable that, for the most part, pretty good putters have fared very well at the Renaissance Club. That makes sense because the greens are slow and undulating. The green speeds, especially for PGA Tour players, are slower than what they’re used to. And the undulation of the greens makes them difficult to putt on. As such, a lot of elite to above-average putters appeared at the top of the leaderboard at the Scottish Open.

Next, let’s evaluate how players separated themselves on the leaderboard at the Scottish Open. Or to put it another way, here are the strokes gained data from each tournament.

Note – these figures are derived from DataGolf. Unfortunately, they do not give out raw strokes gained data from the European Tour. Instead, they estimate it based on round-to-round fluctuations of the Strokes Gained stats maintained on the European Tour. These are then adjusted for field strength (typically towards the bad). In addition, any golfer who only had PGA Tour affiliation did not have their strokes gained estimated. 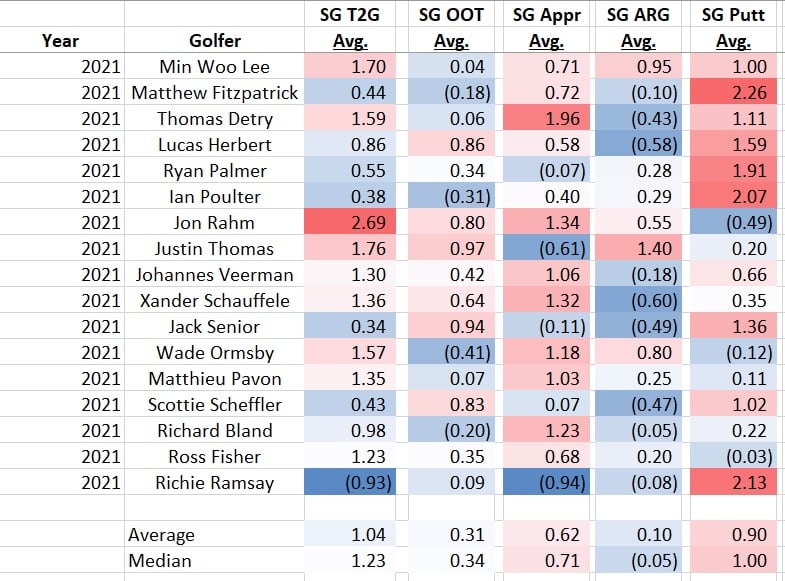 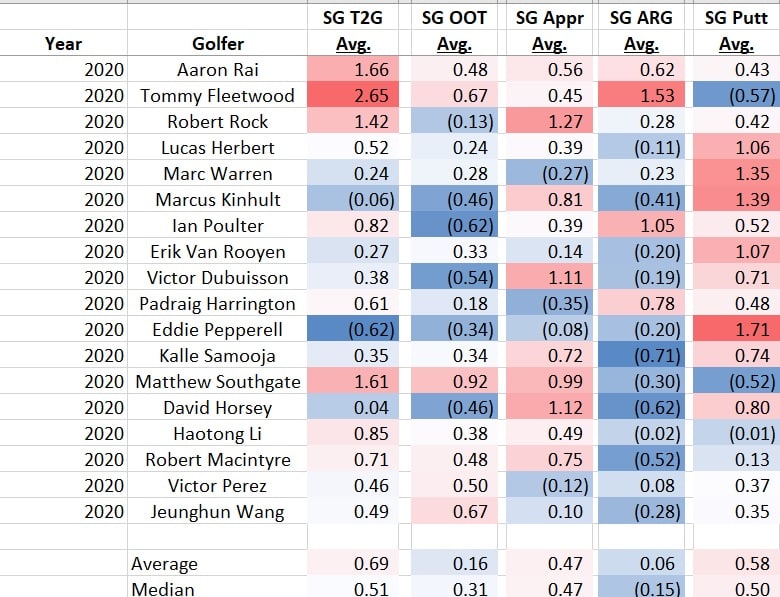 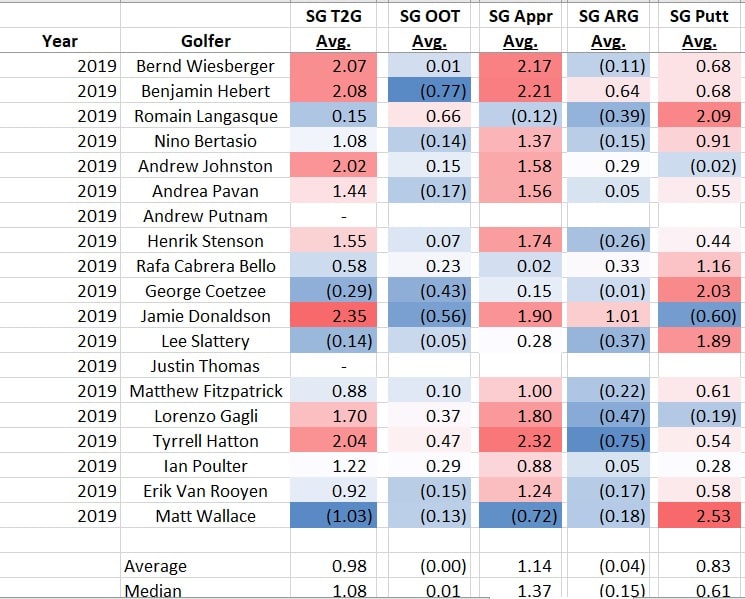 There is a consistent theme to all three tournaments. The players who hit their irons the best and putted the best were able to gain more strokes on the field than they could off-the-tee and around the green. In fact, in-tournament around-the-green performance mattered very little. Of the 52 players listed with recorded stats, 31 lost strokes to the field around the green. It also should be noted that the importance of gaining strokes on the field off-the-tee rose every year since 2019.

So, in conclusion, what types of players should you target this week at the Scottish Open?

Lastly, here’s an estimate of where players will hit their approach shots from. This was obtained using Google Earth imagery and guesswork of where tee shots will likely end up. Unfortunately, this data is only applicable to those with qualifying PGA Tour stats. The European Tour does not maintain proximity stats.