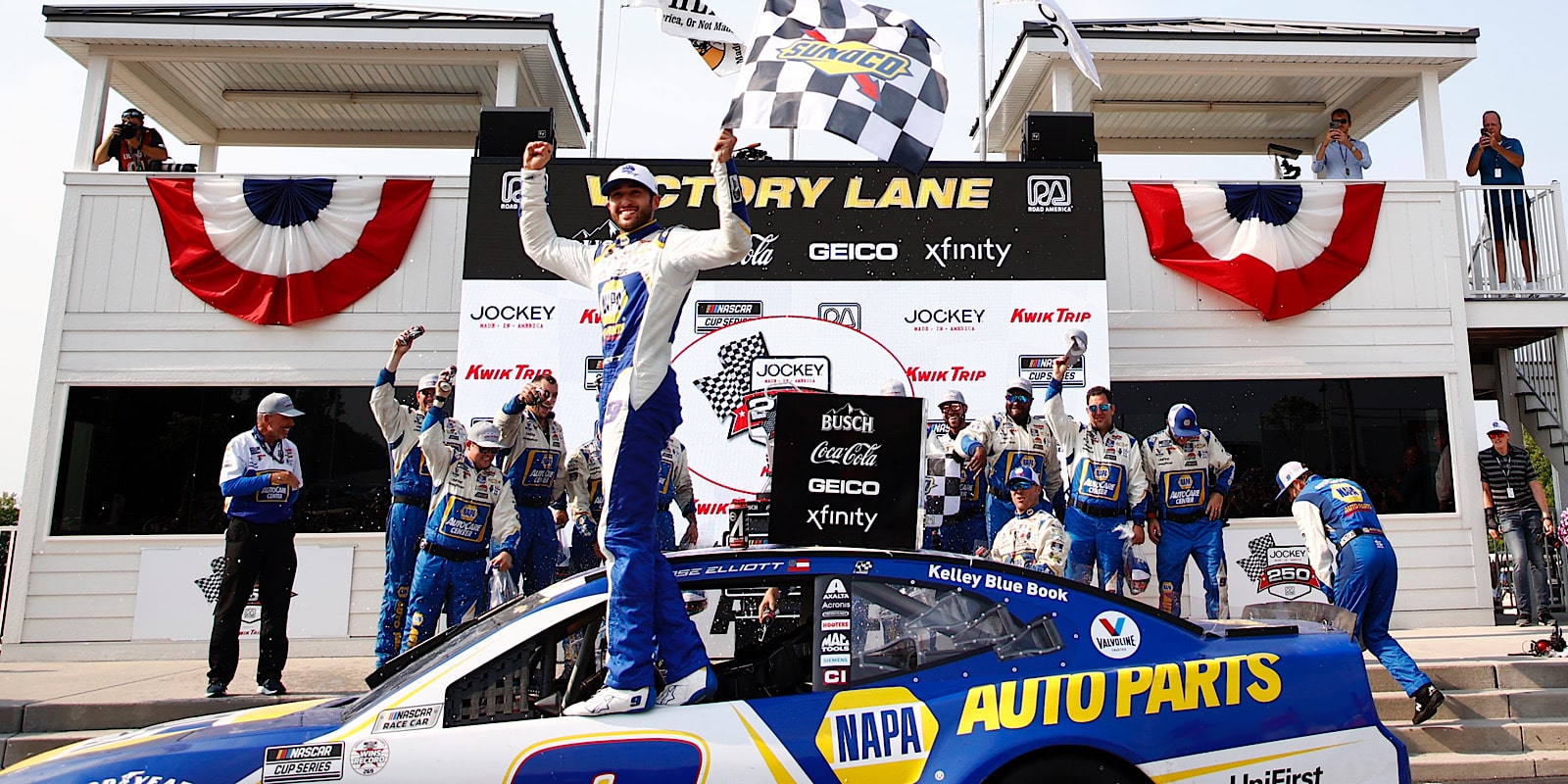 Exercise your patriotic duties and set your NASCAR DFS lineups as NASCAR heads to Road America for the Kwik Trip 250. This 4.05 mile road course is located in Elkhart Lake, Wisconsin, features 14 turns and elevation changes that bring near 200 mph in speed. Road America has hosted races since 1955 and currently hosts over 400 events a year. The NASCAR Cup Series has only made two trips to this mammoth road course. In 1956, Tim Flock won in a Mercury and last season, Chase Elliott took his Chevrolet to victory lane. However, the NASCAR Xfinity Series has been a regular to Elkhart Lake, racing there 12 times since 2010, which Kyle Busch being the most recent winner last season.

This week’s NASCAR DFS slate poses some questions that owners will have to answer when setting their lineups. Do you go Chevy heavy? Can Toyota get back to victory lane? Can Ford battle their way up to the front at Road America?

This may sound repetitive but Kyle Larson is a driver to consider paying up for at Road America. The driver of the #5 Chevrolet continues to prove he is one of the top road course racers in NASCAR. In the last nine road course races, Larson has three wins (2021 – Sonoma, Watkins Glen, ROVAL). He’s also recorded a top five more than half of the time and led the 2nd most laps of any driver on road courses in that stretch. Last season, Road America wasn’t too kind to Young Money with his 16th place finish. The 2nd time around, DFS owners should pay up for Kyle Larson, who will be sure to make his mark on Road America.

It’s another road course, so you must consider paying up for Chase Elliott. If you thought Kyle Larson’s road course stats were amazing, Elliott’s are even better. In the last 10 road course races, Chase has had three wins (2020 – ROVAL, 2021 – COTA, Road America) and finished in the top five 70% of the time. The driver of the #9 Chevrolet has also led the most laps of any driver on road courses in that span. As previously mentioned, he won this race last season leading 24 of the 62 laps. If that’s not enough reason, Chase Elliott is having the best season of any Cup Series driver this year. He’s got two wins, four top 5s, and 11 top 10s. The points leader, Chase Elliott is definitely someone to consider paying up for in this weekend’s Kwik Trip 250.

Ross Chastain and his watermelon are a pair you should consider paying up for this 4th of July weekend. In the last nine road course races, Chastain has gotten to victory lane once and finished inside the top 10 more than 50% of the time. That win coming earlier this season at Circuit of the Americas. Last season at Road America, the driver of the #1 Chevrolet recorded a top 10 finishing in seventh. This season, Chastain proves to be a week in and week out race winning contender. He’s got two wins and on top of the that, he’s tied for the most top 10s in the Cup Series. Watermelon and the 4th of July are good combo and you should consider combining Chastain with your other DFS lineup drivers.

I know what you’re thinking… three Chevrolets and now the first Toyota and it’s… Christopher Bell. Really Christopher Bell?! In the last 10 road course races, Bell has gotten a win (2021 – Daytona RC), three top 5s and five top 10s. More importantly, the driver of the #20 Toyota finished 2nd place last season at Road America. Bell hasn’t had the best 2022 season so far, but it’s not been terrible either. He hasn’t visited victory lane yet, but he has registered a top 10 in 10 of the 17 races this season. That’s pretty consistent and that’s why you should consider Christopher Bell for your DFS lineups at Road America.

When is it going to happen for Tyler Reddick? Maybe not this weekend, but the driver of the #8 Chevrolet could record a finish worthy of DFS ownership. In the last 10 road course races, Reddick has five top 10s and two top 5s (both coming in his last three races). Last season at Road America, the driver of the #8 Chevrolet drove his car to lead 5 laps, 4th place in Stage One, 1st place in Stage Two, and an 8th place finish. 2022 has been hit or miss for Reddick as he’s finished outside the top 20 one more time than he has finished inside the top 10. Still, Tyler Reddick showed he likes Road America last season and you should consider him for your DFS lineups.

Ready to burn some rubber in Road America! 💨 https://t.co/E6lcRPhZCW

Seems mean to pick on Ricky Stenhouse Jr. on road courses but the stats say “stay away”. In the last 10 road course races, Stenhouse has yet to record a top 10 finish. His average finish on road courses of 21.9 is 23rd best amongst active drivers. Last season, the driver of the #47 Chevrolet did finish 12th, but that finish and his 11th place finish on the Indy Road Course are his only inside the top 15. This season hasn’t been that special for Ricky either. No wins, one top five, and five top 10s leave him sitting 25th in the Cup Series standings. We’ll see plenty of fireworks this weekend but I don’t believe they’ll be coming from Stenhouse. NASCAR DFS players should stay away from the #47 Chevrolet at Road America.