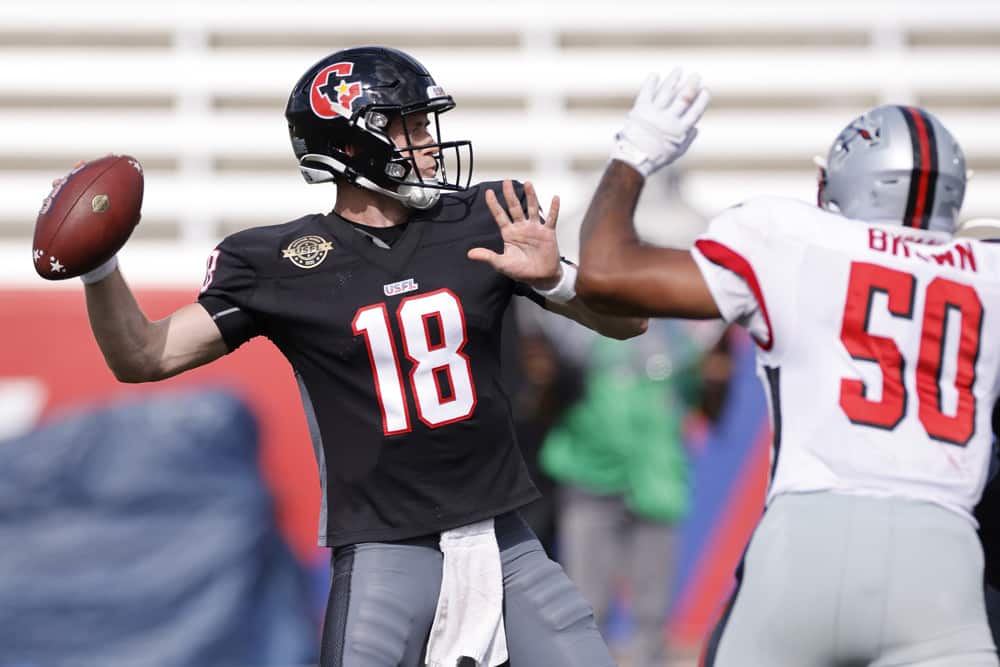 USFL Week 9 is here!  We are two weeks away from the USFL Playoffs in the newest form of spring football.  Perhaps even more important to you is that the USFL fantasy football playoffs start this week.  As you set your lineups and your DFS lineups, Matt Morse and I break down the USFL Week 9 inactives report as we have every week since the beginning.  Let’s take a look at which quarterback is out for the rest of the season and which key players may be returning.

The New Jersey Generals USFL Week 9 inactives report contains J’Mon Moore, who has been having a couple of good games the past few weeks.  Unfortunately for Moore, he just can’t seem to stay healthy.  Kyle Lauletta also remains on the inactives report, meaning DeAndre Johnson must be fully healthy.  I expect the team to roll with Luis Perez again, given that Johnson is banged up and they have already clinched the playoffs.

A week after getting the start at quarterback, Paxton Lynch finds himself on the USFL Week 9 inactives report for the Panthers.  Josh Love will start in his place.  Starting running back Reggie Corbin is also on the list and will miss the game due to injury.  Look for Stevie Scott to get the start as he took over with the most carries last week after Corbin’s injury.

While the Houston Gamblers have to be happy about getting Mark Thompson back, news hit that their starting quarterback Clayton Thorson will miss the rest of the season.  Thorson is having surgery on his injured elbow.  Kenji Bahar will get the start again and will be happy to see both Thompson and top wide receiver Isaiah Zuber not on the USFL Week 9 Inactives report.

The Gamblers will need all the help they can get against the undefeated Stallions.  Even though the Gamblers have nothing to play for, spoiling the Stallions’ perfect year would at least give them something to head into the offseason with.  The Stallions Week 9 inactives report contains two wide receivers, both of whom have been inactive previous in the year.  They will also be without tight end, Cary Angeline.  Sage Surratt will draw the start at tight end and hope to have a better stat line than last week.

The Breakers will be without a few offensive playmakers and depth pieces for their showdown with the Bandits this Sunday. Wide Receivers Marquis McClain and Lee Morris are on the USFL Week 9 inactives report. Quarterback Shea Patterson and Tight End EJ Bibbs will also be inactive. Running back Larry Rose III also continues to be inactive.  Look for receivers Johnnie Dixon, Jonathan Adams, and tight end Sal Cannella to lead the aerial assault for the Breakers. Jordan Ellis and Anthony Jones will handle the backfield duties.

Dixon, Cannella, and Ellis are all superb fantasy options this week. The Bandits will have a few receivers inactive including wide receivers Hasise DuBois and Keith Mumphrey. Quarterback Guy Myers and running back Tra Minter will also be on the sidelines. Look for Vinny Papale, John Franklin III, and Derrick Dillon as the most fantasy-relevant offensive weapons for the Bandits.

Among the Stars’ lengthy USFL Week 9 inactives report is quarterback Bryan Scott, wide receiver Diondre Overton and running back Darnell Holland. Case Cookus will look to build upon his impressive Week 8 performance and again be a top quarterback option this week. Without Overton, the wide receiver corps for the Stars will be led by Jordan Suell, Devin Gray, and tight end Bug Howard.

The Maulers will be reasonably healthy on the offensive side of the ball. Pittsburgh will be without fullback Mikey Daniel and wide receiver Bailey Gaither. The Maulers also resigned disappointing tight end, Matt Seybert. The extent to which he will be involved in this week’s game plan is unknown.