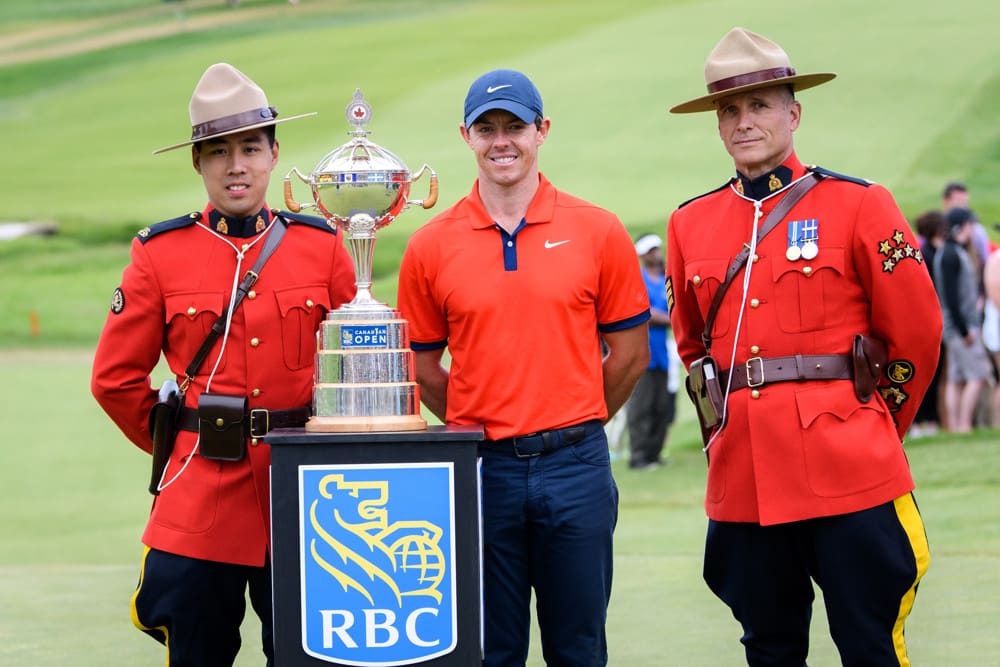 After a three year wait, Canada’s national championship finally will crown a new champion. It’s the 2022 RBC Canadian Open from St. George’s Golf & Country Club in Toronto, ON. As always, here is your early deep-dive on the 2022 RBC Canadian Open and a preview for how to bet. In addition, listen below to the Golf Gambling Podcast for more information about golf betting.

Headlining the field is the RBC Canadian Open defending champion Rory McIlroy. Rory has called himself the defending champion for the last 3 years, as COVID cancelled the 2020 and 2021 RBC Canadian Opens. He won his title at Hamilton Golf & Country Club. That week, it was widely thought that a bomber could not win there as the golf course was both short and required target golf strategies. Instead, Rory fired a final round 61 to nuke the field and run away with the win. While St. George’s Golf & Country Club will demand a similar strategy, he could overpower it once again.

While the field has quite a few big names at the top, overall this field is really weak. The RBC Canadian Open has a few things going against it. For starters, next week is the U.S. Open. But the LIV Golf League also kicks off this week in London. While that field isn’t great either, it did steal away some of the upper middle-class tier of players on the PGA Tour. That might be way the middle and low tier in this field is a disaster. Some of the names who made it in are guys who haven’t been relevant in more than 5 years. That won’t make filling out DraftKings lineups very easy.

As mentioned previously, this is the first RBC Canadian Open since 2019. In 2019, it was played at the Hamilton Golf & Country Club in Hamilton, ON. For three years, St. George’s has waited for its chance to shine. In 2022, it gets that chance.

St. George’s Golf & Country Club was built in 1929 and designed by Stanley Thompson. While Thompson isn’t exactly a household name in United States golf architecture, he’s a legend in Canada. He designed dozens of private and public golf courses in Canada. He also worked closely with Robert Trent Jones, including training his son Robert Trent Jones Jr. With Jones and Donald Ross, he founded the American Society of Golf Architects.

As for the work done at St. George’s Golf & Country Club, it’s immaculate. It is consistently ranked as one of the best golf courses not just in Canada, but in the world:

For more detail on St. George’s Golf & Country Club, check out this video:

In addition, the YouTube channel Beyond the Contour has flyover videos of the first 8 holes of the golf course. Hopefully the other 10 will be added to the channel later this week.

St. George’s Golf & Country Club has hosted the RBC Canadian Open five times. It last hosted the tournament in 2010. Since then, the golf course has undergone several changes. Among the changes include a transition from Bent/Poa greens to Bentgrass, as well as significant tree removal, particularly around the greens. In addition, Tom Doak and Ian Andrew rebuilt all the greens at the golf course, including some expansion to reclaim certain pin positions.

As mentioned earlier, this is the first time since 2010 that St. George’s Golf & Country Club has hosted the RBC Canadian Open. Not only is it an extremely small sample size, but the game of golf has changed significantly since that time. Still, there might be a few things to take away from that tournament to apply to the 2022 RBC Canadian Open that may preview how it will play.

In terms of agronomy, the golf course is Ryegrass and Bluegrass tee-to-green in the fairways and the rough. All the Poa Annua was taken out of the greens in the 2014 renovation, making them true Bentgrass greens. The greens are also pretty small, despite some expansion. Players will be firing into small targets this week.

Next, let’s try and find clues from the 2010 tournament about what types of players to target this week. Here’s how players separated themselves on the leaderboard (per DataGolf):

From this chart, performance off the tee didn’t seem to matter all that much (more on this in a minute). But players separated themselves much more on the leaderboard through their iron play, scrambling and putting. This would hint that gamblers might want to put a heavier weight in these categories.

But is this the type of profile of player that ended up filling the Top 10 at the 2010 RBC Canadian Open? Absolutely yes. Almost everyone in that Top 10 ranked pretty poorly in Strokes Gained – Off-the-Tee leading up to the 2010 RBC Canadian Open. Only Charley Hoffman ranked inside the Top 50 in Strokes Gained – Off-the-Tee a week before the tournament. And almost all of them either ranked outside the Top 100 in either driving distance and accuracy, or for the most part both.

To dig deeper into the approach play statistics, where these players excelled with their irons was from within 175 yards. While I anticipate players will have about 7 or 8 approach shots over 200 yards, most of these will come when a player has the ball on a peg on the Par 3’s. But several of these players ranked highly in multiple proximity stats from either inside 125 yards, from 125-150 yards, or from 150-175 yards.

In terms of comp courses, here are a few shorter courses where better than average iron play, scrambling and putting is emphasized, and off-the-tee performance doesn’t matter almost at all:

These might be useful golf courses to take a look at who does well on these types of tracks.

So to sum it all up, what am I looking for this week?