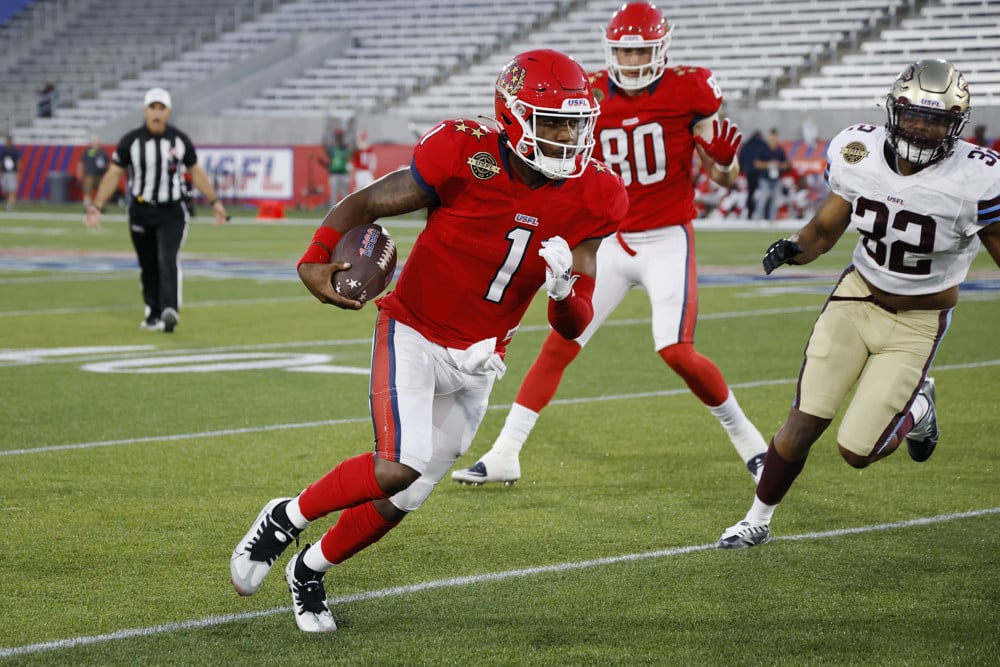 The USFL has progressed to Week 8.  Spring football fans have waited to see how the league would progress, and now we’re three games away from the playoffs!  But as time goes, and hard hits pile up, so do the injuries.  Each week, Justin Mark and myself break down the injuries, as well as touch on some of the additions and cuts on each team.  So let’s take a look at the USFL Week 8 inactives report.

There isn’t much to talk about when we look at the USFL Week 8 inactives report when it comes to the Pittsburgh Maulers.  They’re missing a couple from their defensive backfield, a few in the trenches, a running back, and a linebacker.  Truth be told, at this point, it doesn’t seem like the Maulers can do much adding or subtracting from their team to change the result of disappointment week after week.  On the other hand, the New Jersey Generals get good news, as DeAndre Johnson is no longer on the inactives report.  Johnson missed last week’s game but it appears he will be back.  The Generals signed Kyle Lauletta for depth, however, it looks like he won’t be needed as Johnson and Luis Perez will be the two active quarterbacks.

The biggest hit in the USFL Week 8 inactives report for the New Orleans Breakers is to their running back room.  Larry Rose and newer addition Ezra Gray will both miss another game.  However, this hasn’t affected them too much as the emergence of Anthony Jones has helped the ground game as well as the consistent play of Jordan Ellis.  Shea Patterson remains on the inactives list meaning the Breakers will role with Kyle Slother and Zach Smith again.  The big news for the Stallions is that top targeted receiver Victor Bolden Jr. has been placed on the USFL Week 8 inactives report.  They will also be without Jeff Thomas and Cary Angeline.  Look for Osirus Mitchell, Marlon Williams, and Peyton Ramzy to all step up in their absence.  Then again, the Stallions may give the ball to Bo Scarbrough 30 times.

The Stars will continue to move forward without Bryan Scott. It is surely disappointing to see Scott miss so much time. Case Cookus will continue to operate as the QB of the stars and has filled in admirably. Darnell Holland is also on the USFL Week 8 inactives report so look for Matt Colburn and Paul Terry to manage the workload in the Stars’ backfield.  Wide receiver Khalis Lewis will be inactive for the Stars. Look for Jordan Suell and Devin Gray to lead the aerial assault. Both are starters in fantasy leagues. The Panthers will be without QB Eric Barriere, TE Marcus Baugh, and WR Ray Bolden. Look for Josh Love to get the nod at QB but there are better fantasy options out there. With Marcus Baugh inactive, La’Michael Pettaway to serve as the primary TE. Pettaway received 6 targets last week and remains fantasy relevant.

Quarterback Clayton Thorson finds himself on the USFL Week 8 Inactives report and Kenji Bahar will start in his place. Bahar filled in for Thorson last week and was more efficient than Thorson but did turn the ball over twice. The Gamblers will also be without workhorse running back Mark Thompson. Dalyn Dawkins and Devwah Whaley will try to replicate his success in the backfield but have big shoes to fill. The Gamblers will also be without leading receiver Isaiah Zuber. Anthony Ratliff-Williams will look to slide in and lead this wide receiver room this week. The Bandits will be without mostly depth pieces but will be missing TE De’Quan Hampton. Look for Cheyenne O’Grady to see an uptick in targets and should be one of the better tight ends for fantasy purposes in Week 8.