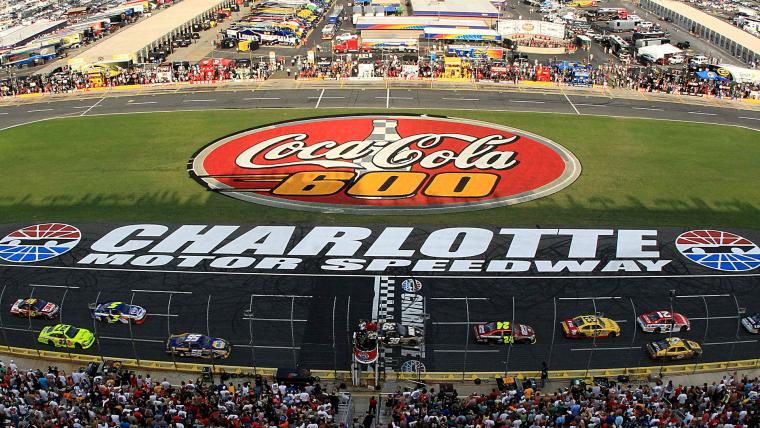 This weekend, as we set our NASCAR DFS lineups and remember those who paid the ultimate sacrifice, NASCAR honors them with the running of the Coca-Cola 600. Drivers will endure 600 miles in NASCAR’s backyard, Charlotte Motor Speedway. This 1.5 mile asphalt track was opened in 1960 and has hosted over 120 NASCAR Cup Series races. In those 62 years, NASCAR great’s Richard Petty, Darrell Waltrip and Jeff Gordon all went to victory lane. No one won at Charlotte Motor Speedway more than Jimmie Johnson, who won eight times in Concord, NC. Kyle Larson won this race last season only leading 26 laps

This week’s NASCAR DFS slate provides some difficult decisions for owners. How many Hendrick Motorsports drivers do you pay up for? Can you trust the Joe Gibbs Racing entries? Are the Ford’s worth their salaries or should stay away all together?

A driver that the stats stay you should pay up for is Kyle Busch because Charlotte has been Rowdy’s playground. In 33 starts, he’s recorded 20 top 10 finishes and 15 top five finishes. Not to mention, winning this very race back in 2018. Another impressive stat is that if Busch leads 50 laps in Sunday’s 600, he’ll surpass 1,500 laps led in his career at Charlotte Motor Speedway. The driver of the #18 Toyota has already visited victory lane once this season and has finished worse than 10th in only four races. Kyle Busch may be one of the two highest salaries this weekend, but the stats say he is well worth the price.

Martin Truex Jr is another Joe Gibbs Racing Toyota you should look to play in your DFS lineups. Truex has already visited victory lane at Charlotte Motor Speedway. In fact, he’s won three times there in his career (2016, 2017, 2019). He’s been consistently good at Charlotte with nine top 10s and seven top 5s in the last 11 races. The 2022 season hasn’t been kind to the driver of the #19 Toyota. Zero wins and only two top five finishes. Not your typical season for Truex Jr, but if there is a track that he can right the ship, it’s Charlotte Motor Speedway.

You won’t find a better salary for a driver than Chase Elliott. It’s kind of surprising that he isn’t in the top three salaries for this weekend’s 600. At Charlotte, Chase has score a top 10 in 60% of his starts and a top five 50% of the time. Elliott also won Alsco Uniforms 500 back in 2020 to get his first win on the oval. If his career stats at Charlotte don’t persuade you, maybe his 2022 statistics will. The driver of the #9 Chevrolet scores the most fantasy points per race and has the best average finishing position out of any driver. Chase Elliott has been a model of consistency and you can play him in your lineup this weekend and get a good ROI.

Kyle’s older brother, Kurt Busch, is a driver to consider when setting your DFS lineup this weekend. He’s got a great history with Charlotte Motor Speedway with a win back in 2010 and three top 10s in his last five starts there. This season we have seen Kurt improve 23XI Racing and get the 2nd year team their 2nd win in their history. Busch has also recorded five top 10s in the 13 points paying races. Toyota seems to be coming on lately and Kurt Busch finds himself near the front more often than not. For this weekend’s Coca-Cola 600, you should definitely consider the driver of the #45 Toyota for you DFS lineups.

Ricky Stenhouse Jr may not be a name that is top of mind when it comes to DFS lineup creation. He’s not flashy, not going to win races, but he’s pretty consistent. Stenhouse has the sixth best average finish amongst active drivers with at least 10 starts at Charlotte Motor Speedway. In 2022, Stenhouse has finished inside the top 10 four times and in three of the last four races. Stenhouse may not get the win Sunday but a top 10 is not out of the question. Therefore, the driver of the #47 Chevrolet should be considered for your DFS lineup.

We have @reeses on our No. 47 @kroger Camaro @CLTMotorSpdwy & we're honoring COL Gail Halvorsen on @StenhouseJr's windshield.

A driver that you should avoid in your lineups is Michael McDowell. The driver of the #34 Ford just doesn’t have the stats to make me confidence in a good result this weekend. In 22 starts, McDowell has never recorded a top 10. His best finish at Charlotte was 14th back in 2016. In 2022, the Front Row Motorsports driver has an average finishing position of 19.1. Pair that with his 23rd place finish at Kansas and 15th place finish at the All-Star race and it doesn’t look good for McDowell. He can be a sneaky DFS play from time to time, but this is a weekend the stats says stay away.