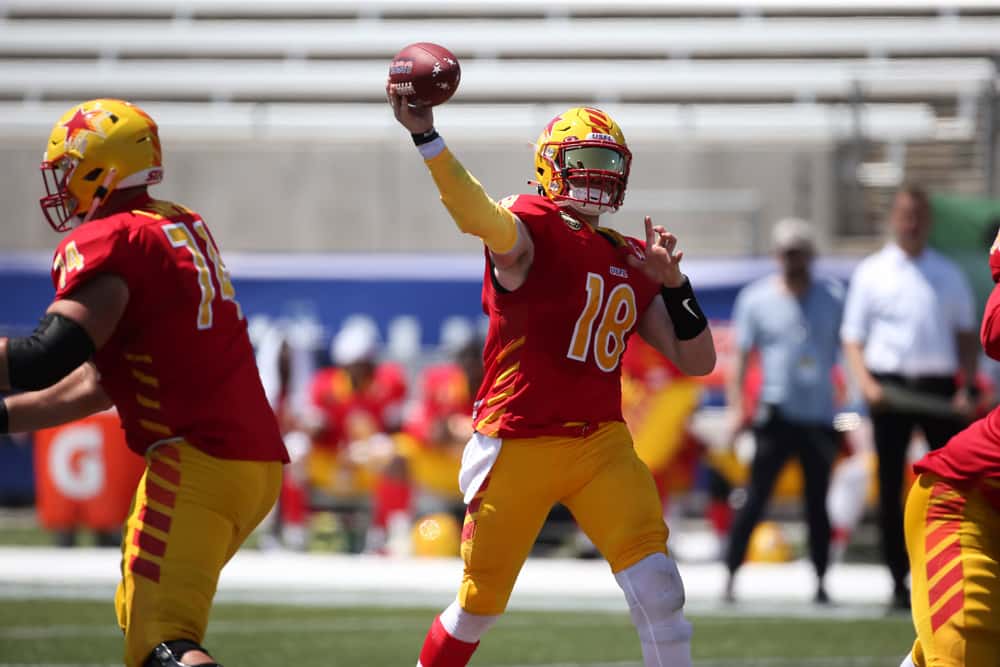 As another week of practice gets underway the USFL Week 4 injury report continues to have names added to it.  With smaller rosters, the injuries can create big impacts on each game.  This week finds two quarterbacks on it that started last week.  However, it’s next man up mentality.  Let’s take a look at the USFL week 4 injury report and see which players are out, and which may have a shot at playing.  Check back often for injury updates or follow @SGPNFootballDoc for breaking news and analysis!

The biggest news of Week 4 so far comes from the Philadelphia Stars injury report. It has been announced that starting QB Bryan Scott is not only out this week but out indefinitely with a knee injury. Scott was leading the USFL in passing yards and touchdowns before suffering a non-contact knee injury last week. He tried to play through the injury but his mobility and throwing ability was severely limited. Backup QB Case Cookus played fairly well in replacement of Scott but was unable to sustain the lead the Stars built in the first half. The good news is Cookus will have his full compliment of the teams top WRs this week with WR Chris Rowland being a Full Go. Rowland had a great Week 1 but has been limited the past two weeks with a shoulder injury.

For the defense, it is largely good news for Week 4. The only player who will be out this week is DE Carroll Phillips. Phillips is a solid contributor to the DLine with 10 tackles and 1 sack on the year. However, all five other DLine players on the injury report are a Full Go for this week and will be able to make up for Phillips absence. Additionally, LB Josh Banderas is returning to lead the Stars defense this week after missing Week 3 with an injury. Banderas still leads the team with 21 tackles, despite not playing at all last week. This is a big boost to a defense that got abused in the run game last week.

The Michigan Panthers had their coming out party in Week 3, beating the Pittsburgh Maulers 24-0. Pittsburgh has proven to be the doormat of the league, but the Panthers come into Week 4 with good momentum. There clearly seems to be an illness going around the locker room and unfortunately it will cause two offensive linemen to be out this week. Now this would be detrimental to any offense, but it will especially be difficult for Michigan. This is a team that predicates itself on the ability to run down opposing teams throats, averaging almost 170 rushing yards per game. Less concerning is backup QB Paxton Lynch being out this week, frankly because he was terrible when on the field in Week 1.

The defense will only have one player out this week due to injury for certain. DB Jalin Burrell is a contributor to the pass defense with 8 tackles and 1 pass deflection on the year. He will be missed this week but a much larger concern comes from any other DB on the injury report being limited or unable to play. DBs Stewart, Ballard, and Putu are all questionable with an illness this week and the Panthers defensive backfield could be thin this week. Going up against the pass happy offense of the Philadelphia Stars is not a good time to be thin at DB.

New Jersey is coming off a massive win against Philadelphia last week to put them atop the North division. The General’s offense really found their groove in Week 3, especially in the run game. More good news for the offense comes by way of the Week 4 injury report. The biggest loss comes by way of the OLine with Garrett McGhin being ruled out, however the other three offensive linemen are likely to suit up this week. The Generals also receive a nice boost with both their starting TEs healthy and their WR1 in Satterfield. WR J’Mon Moore has been a non-factor this season and is a healthy scratch.

It is not quite as peachy for New Jersey on the defense for this week’s injury report. The big concern comes in the defensive backfield as at least three DBs will be out this week. S Shalom Luani is the biggest loss as he was one of the team’s leading tacklers and has an INT on the year. Both Bell and Tutt were contributors to the defense as well but had not made a significant impact yet. The good news is that Luani and Bell were inactive last week as well and the defense only let up 16 points. The other good news is the Generals are playing a Pittsburgh team that to say is bad is a gross understatement.

Pittsburgh is off to an atrocious start to the year and got absolutely embarrassed in Week 3. Well, if any Mauler’s fans are looking for better news, don’t come to this weeks injury report. The Maulers have difficulty moving the ball and scoring points when fully healthy. They will now be down one of their starting TEs and two of their top WRs. Most notably, WR Bailey Gaither will be greatly missed as he leads the team in receiving by about a 75 yard margin. Pittsburgh will also be down their starting FB and two offensive linemen. About the only good news for them in Week 4 is that their starting RB Groshek is a full go.

For the defense, the injury news isn’t great but is a bit better than the offense. The Maulers will be down one of their biggest playmakers in the back end for two consecutive weeks. DB Mclain-Sapp started the year on a tear with two defensive TDs in only two games. Unfortunately he picked up a hamstring injury that has proven to be fairly severe. Hamstring injuries are particularly difficult to come back from and if he is not practicing yet, he is still several weeks from being able to play at full speed. DL Eric Assoua has only played in 1 game this year but did record a sack in Week 1. His depth will be missed on the DLine Saturday.

The Tampa Bay Bandits barely survived Week 3 with a one point victory against Houston. They know face their attention to the undefeated Birmingham Stallions. For the offense, the injury report is looking good in all position groups except the OLine. This is not good news for an offense that struggles at times to find a groove. They are near the bottom of the league in yards on offense and also are the worst team when it comes to the turnover differential. Having two offensive linemen out with injury this week brings into question how well they will be able to protect QB Jordan Ta’amu.

There is mixed feelings regarding the defensive injury report. On the bright side, one of Tampa’s leaders on defense, LB Christian Sam is a full go this week. Sam was limited last week with a hip injury and is still the leading tackler on the team. I expect him to be all over the field this week and will be needed against this Stallions offense.  On the less bright side, the DB depth of the Bandits will be challenged this week. Campbell, Griffin, and Melifonwu are all players who have played and contributed in EVERY game this year. To lose that much playmaking ability in one position group will be a difficult task to overcome this week.

The hometown Birmingham Stallions may be able to beat every opponent except their immune systems this week. With many players dealing with an undisclosed illness, there is extra reason to be concerned for this team in Week 4. Most notably is current starting QB J’Mar Smith who is questionable with an illness for Saturday. Smith has been lighting it up through both the air and ground since he took over for an injured McGough in Week 1. However, in an ironic situation it appears McGough is the healthier of the two this week and may be called upon if Smith can’t produce. The other big injury news is starting TE Angeline, who is fourth in receiving on the team, is out this week.

This mysterious illness is really carving a hole in the LBing core of the Stallions. LB Burns who leads the team in interceptions, has already been ruled out for Week 4. Just as concerning, is that the two leading tacklers for Birmingham are questionable with this same illness. LBs Gates and Wright have been tackling machines this season, both with over 25 on the year. If either player is unable to go or these players are limited this week, it could spell a world of trouble for the Birmingham defense.

*Injury Reports will be updated once practice reports are released*