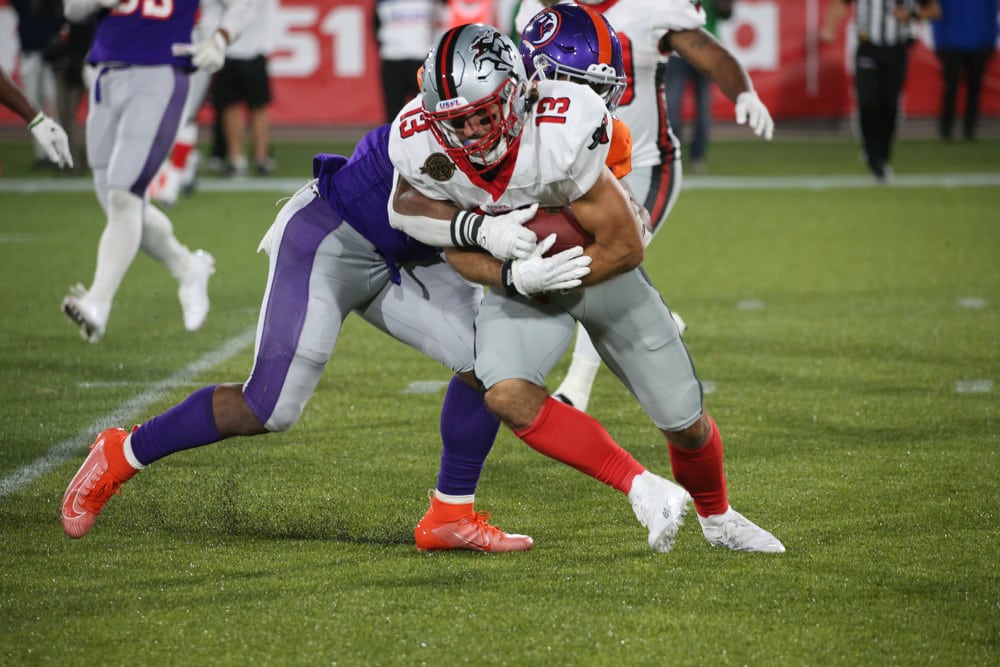 The USFL surely keeps us on our toes. Injuries, inactives, practice squad demotions, releases, and signings seemingly come at us so fast and are sometimes released shortly before the game starts. USFL Week 3 is here and once again we have some last-minute roster moves with inactive and practice squad moves. I think you will there are some surprise inactives that will have fantasy managers and gamblers rethinking their approach. There are plenty of relevant players who are inactive for this weekend and impact fantasy rosters. With the USFL being such a small league and so many players with unknown capabilities, the amount of pregame surprises seems endless. Don’t get caught with an inactive player in your lineup and get these guys out of your starting lineup ASAP.

The Gamblers will be without a few offensive playmakers for this Week 3 matchup with the Bandits. Most notably they will be without speedster JoJo Ward. Ward had 9 targets and 7 receptions in Week 1 and was sorely missed in Week 2. Look for Tyer Simmons and Isaiah Zuber to be the top receiving targets for the Gamblers. Devwah Whaley will be inactive meaning the Gamblers will only carry two running backs into the game. Look for Mark Thompson and Dalyn Dawkins to carry the load. Thompson continues to be a top fantasy option at RB.

Backup QB Kenji Bahar is inactive leaving the Gamblers without a QB to backup Thorson. The Bandits will be down a few receivers with Keith Mumphrey and Hassie DuBois inactive. Surprisingly, they released Jordan Lasley from the roster who, up until this point, led the team in targets with 10 through two weeks. Look for Vinny Papale. Rashard Davis, and Derrick Willies are some of the top receiving options.

The biggest game of the week will be without a little star power. The Breakers have inactivated dynamics running back TJ Logan for their Week 3 showdown of undefeated teams. Logan will be missed as he was used in all facets of the game. Look for Jordan Ellis to be the lead back and for Larry Rose to see some work for the first time this season. If Rose takes over the TJ Logan role this week, he may be fantasy relevant.

The Breakers will be down some tight end depth with EJ Bibbs inactive. Look for Sal Canella to be the featured tight end a big part of the offense. THe Stallions will once again roll into Week 3 with only one active tight end. Cary Angeline is a must-start in fantasy USFL. Sage Surratt will be inactive for this game. They will also be without Jordan Chunn which means once again this dynamic backfield will be led by CJ Marable and Tony Brooks-James. Both are worth starting in fantasy USFL and should see plenty of work. Marable is an RB1.

The Maulers and Panthers will both be without major offensive pieces for their Week 3 matchup. Matt Seybert will be inactive for the Maulers meaning Hunter Thedford will be the only active tight end on the roster and should see some work. He is worth an add-in fantasy. The Panthers will be one running back short with Reggie Corbin inactive. Look for Stevie Scott and Cameron Scarlett to once again lead this dynamic rushing game. Both are worth starting in fantasy and will see plenty of work.

For the last game of Week 3, the Stars will be without a few of their playmakers. Darnell Holland is inactive. Holland has been their leading rusher to this point in the season. Look for Matt Colburn and Paul Terry to have expanded roles. Both are worth looks in Week for fantasy matchups. Kahlil Lewis and Brennan Eagles will both be inactive and therefore the Stars will have two fewer receivers to work with. Jordan Suell, Diandre Overton, and Maurice Alexander should all be featured prominently in the Star’s passing attack and should be started in all fantasy formats.

Artayvious Lynn was released leaving Bug Howard and Pro Wells as the only two tight ends on the roster. Bug Howard is one of the best tight ends in the league and should see most of the work. The Generals will be without a handful of depth pieces along the offensive and defensive sides of the ball. J’Mon Moore will be inactive leaving them without one of their pass catchers. The Generals love running the ball and will likely run their offense through Trey Williams, Darius Victor, Kavontae Turpin, and Randy Satterfield. All are worth starting in all fantasy formats. In somewhat of a shocking move, the Generals have released spring football legend TE Nick Truesdell. You have to think injuries played a role here.