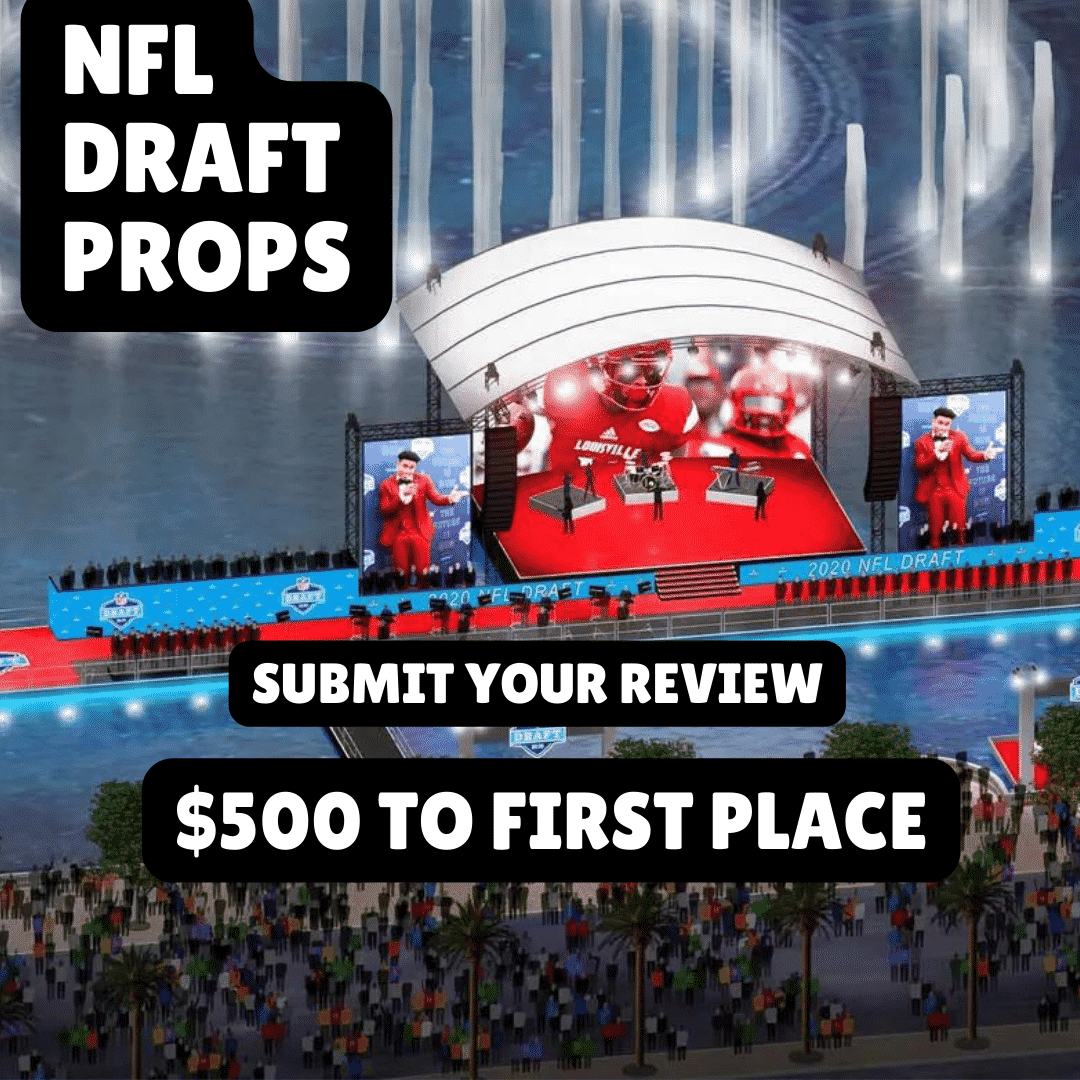 The 2022 NFL Draft is just around the corner and we here at the Sports Gambling Podcast Network are giving back to the community. You can win $500 in our NFL Draft Props Contest!

It’s always an exciting time with teams adding key pieces of the future, general managers working the trade market, and players rising up the charts (and subsequently other players falling). We’re adding to that excitement with our 2022 NFL Draft Props Contest!

The 2022 NFL Draft starts on Thursday, April 28th at 8 p.m. ET with the first round taking place. The second and third rounds will start at 7 p.m. ET on Friday, April 29th with the final four rounds on Saturday, April 30th at noon ET.

This year’s NFL draft is being held in Las Vegas, Nevada. It will be broadcast on NFL Network, ABC, ESPN, and ESPN Deportes.

How to win $500 in SGPN’s NFL Draft Props Contest

It’s simple. Go to the Contest Page (https://sportsgamblingpodcast.com/draft) and follow the steps to enter!

First, submit a review for either the Sports Gambling Podcast or SGPN App, and upload a screenshot of that review. Then, you will be redirected to the NFL Draft Props Contest!

Answer these 15 multiple choice questions for your chance to win!

Who will be drafted with the No. 1 overall pick?

I have to go with Travon Walker here. He’s become the clear betting favorite and it would be surprising if the Jaguars went elsewhere.

Who will be selected with the No. 2 overall pick?

It seems to be Walker and Hutchison at the top, so I’m going with Aidan Hutchinson here.

Who will be drafted first? Evan Neal or Iken Ekwonu

Evan Neal should be the first offensive lineman off the board and I could see him going in the top three picks. Within the top five without a doubt.

What pick will Kenny Pickett be drafted? Over/Under 7.5

Pickett has been moving up and down the draft board and this is a good number. Many have mock drafted Pickett to Carolina at six and I see the Panthers making that pick. Let’s go before pick 7.5.

What pick will Malik Willis be drafted? Over/Under 11.5

I’m also going with before pick 11.5 for the other top quarterback in the draft. Atlanta needs a new gunslinger at pick #8.

I’m rooting for chaos. Let’s get as many trades as possible.

Which WR will be the first selected in the 2022 NFL Draft?

Garrett Wilson seems to be the top guy across the board. I think he’ll be off the board within the top 10 or 15 picks as the first WR drafted.

How many QBs will be selected in the first round? Over/Under 2.5

This is a quarterback league. At least three teams will draft a QB in the first round. Smash the Over 2.5.

Who will be the third QB picked in the 2022 NFL Draft?

This is down to Matt Corral or Desmond Ridder. I’m going with the Cincy gunslinger in Ridder to go off the board first.

Who will be drafted first? Jameson Williams or Drake London

This is a toss-up for me but I’m going with Williams.

How many WRs will be selected in first round? Over/Under 5.5

Wide receivers should be flying off the board after the top 10 picks or so. I can’t see five or fewer being selected, so I’m taking the Over 5.5.

Will a RB be selected in the first round?

No. I just don’t see it happening given the crop of talent at other positions.

How many SEC players will be selected in the first round? Over/Under 10.5

Can a third of the first-round picks be from the SEC? I’m leaning towards yes.

Total defensive players drafted in the first round Over/Under 15.5

Defense wins championships. This number is just below half of the first round and I think we’ll get at least an even 16-16 split.

Total offensive players drafted in the first round Over/Under 16.5

Good luck and let it ride!