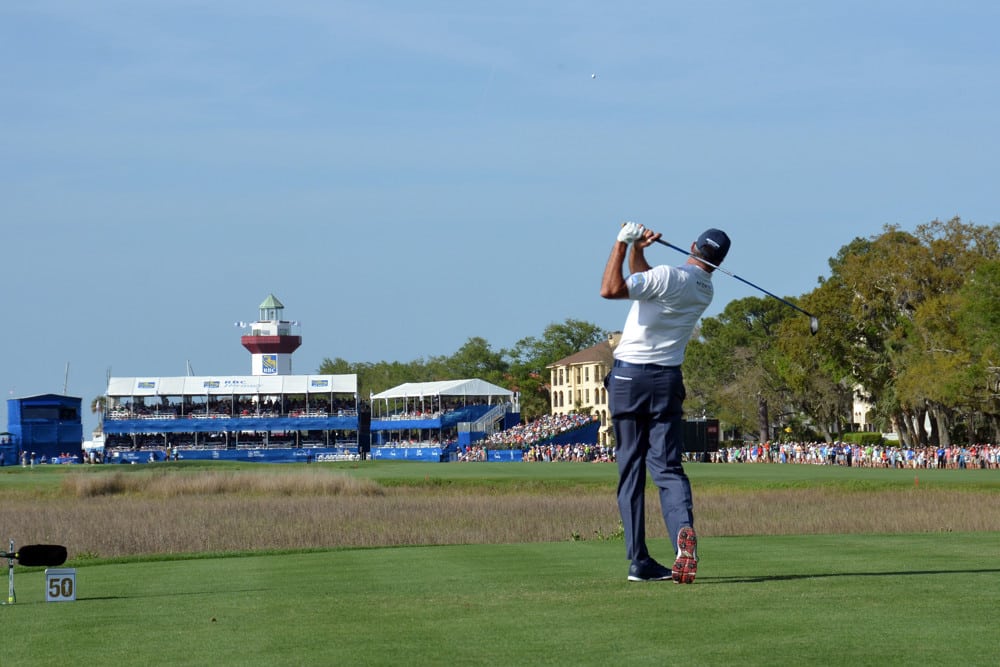 One week after a thrilling Masters, the PGA Tour cools off with a laid back trip to Hilton Head, South Carolina. A solid field plays the RBC Heritage at Harbour Town Golf Links. As always, here is your early deep-dive on the 2022 RBC Heritage and a preview for how to bet.

Most top players who played in last week’s Masters will take the week off. But several big names will play for a consecutive week. Headlining the RBC Heritage this week is Justin Thomas. Thomas once again posted a solid Masters performance with a Top 10. However, his winless streak continues. Thomas hasn’t won a tournament since the 2021 Players Championship. This is a huge winless drought for a player of his caliber. He’ll look to end that streak this week.

Another notable is Collin Morikawa. While Rory McIlroy stole the show on Sunday, Morikawa put up a Sunday charge of his own. Morikawa shot a final round 67 to finish 5th at the 2022 Masters. Morikawa made a run at the 2021 RBC Heritage title only to fall short on Sunday. He’s primed for another run in 2022.

For an amateur, it is a wonderful golf course to play. Even from the back tees, the golf course is not overly long. The bunkers are also relatively shallow and very playable. However, the greens are very small. They average only about 3,700 square feet per green. Harbour Town has the 2nd smallest greens on the PGA Tour, and are well guarded by water hazards and bunkers as expected from the diabolical Pete Dye.

There are also trees EVERYWHERE. It’s the perfect golf course for the retirees who do nothing but hit every shot dead straight over and over and over. But for those who fight a nasty slice, this golf course is certainly not for you. Even the longest and highest of hitters won’t be able to cut corners over the oak and palmetto trees.

Admittedly, this isn’t my favorite of the Pete Dye collection. It’s primarily from the perspective of a fan of the PGA Tour. It’s not a very television-friendly golf course. With the golf course so tree-lined and the fairways so tight, it’s tough to get a good understanding of where a player is on the golf. The backdrop of the first 15 holes looks mostly the same. The use of shot tracer also takes a hit because the golf course rarely allows a player to take crazy lines off the tee to give the viewer the wow factor when someone tries to be bold.

However, the final three holes of the golf course are a lot of fun, mainly because it starts to open up and it plays along the inter-coastal for some nice views of the ocean on television:

If you took anyone with just a smidge of knowledge about golf architecture and asked them who designed this hole, I bet they’d come up with the right answer. This is such a classic Pete Dye design. The hole is protected down the left side by a large elongated fairway bunker, but it encourages the pro to play towards it so they have a shorter and better angle at most hole locations.

There’s also a tree right smack in the middle of the fairway, though it likely will not create a direct obstruction for players not named Bryson DeChambeau. But for those who play down the right side not only will they have a longer approach in, but on days where the pin location requires a draw, the tree provides quite the obstacle for that shot shape. Pete Dye is famous for these tiny little annoyances on a hole to fluster golfers, but it’s a very good hole and one that totally fits in with his style. 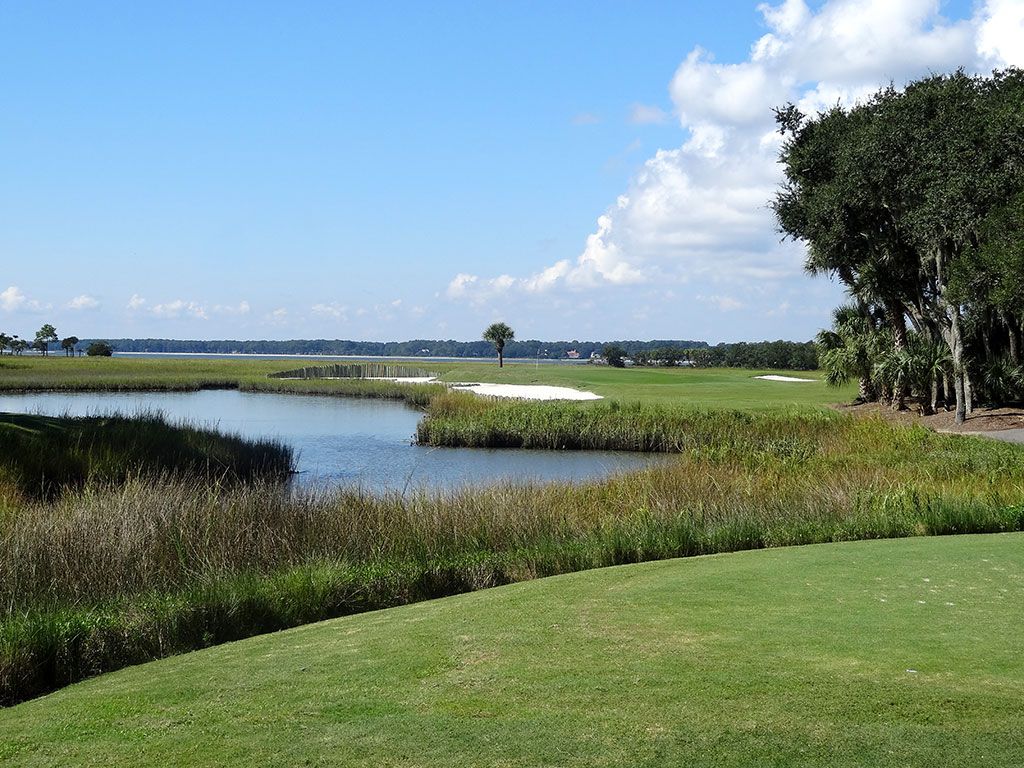 This one is played directly into the prevailing winds off the sound. It’s an intimidating tee-shot on Sunday if the winds are up. Anything short of the green will either find the marshes short or the small strip of the bunker about four feet below the putting surface that they’ll have to blast up towards. In addition, a very narrow rectangular bunker to the right of the green can create impossible lies and stances to get the ball up and down for par. There’s also a lot of cool tucked pin locations that can be placed here that will make the players visually uncomfortable. 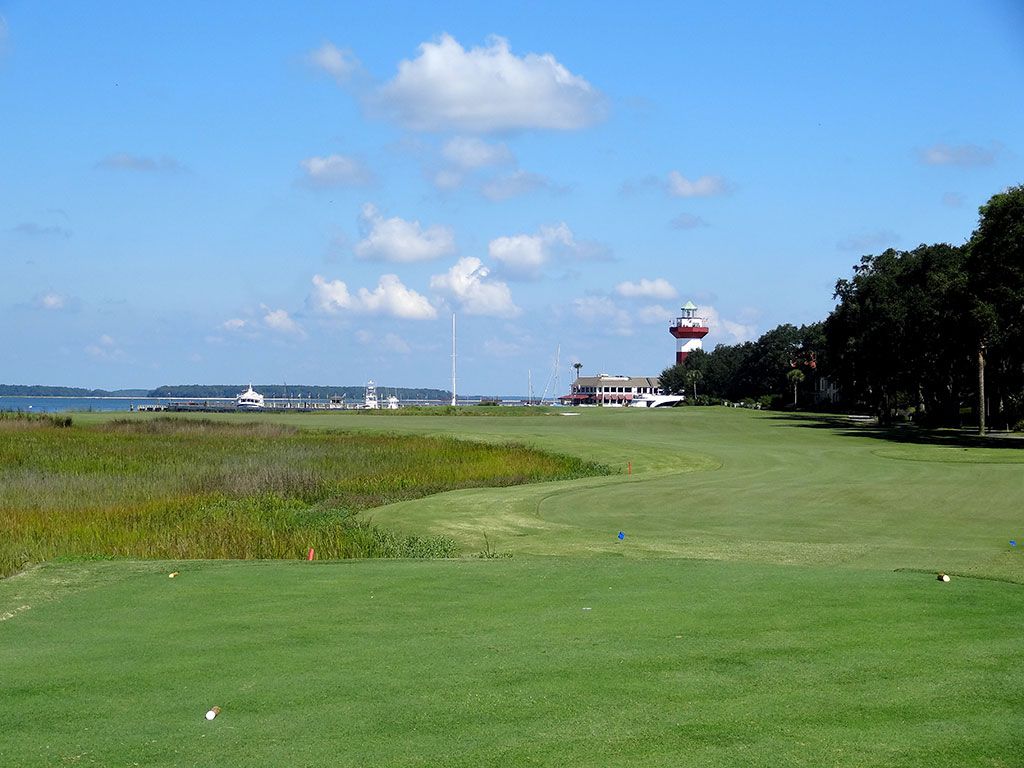 This is the signature hole on the golf course, as it plays towards the famous Hilton Head lighthouse in the distance and requires two forced carries over the marshes and the sound. With the wind coming from the left it will take a very errant hook from a right-handed golfer to hit in the water on both the tee-shot and the approach. Still, with water all the way down the left and a large elongated bunker short right of the green, it’s a very intimidating final hole that could provide some fireworks for the tournament if a player does indeed get in trouble.

Notable Golf YouTube Vlogger Mark Crossfield did a film series of Harbour Town in some very challenging wind conditions. Here’s a video of him taking on the final three holes of the golf course:

Before getting into the nitty gritty, here are some nuts and bolts about the golf course. Harbour Town Golf Links runs just a shade under 7200 yards. It’s a Par 71 with three Par 5’s. Per the GCSAA, the small greens run 11.5 on the stimpmeter. They’re also overseeded with Poa Trivialis. The fairways and rough also are overseeded with ryegrass.

Let’s next look at the relative skill set chart for Harbour Town Golf Links, per DataGolf: 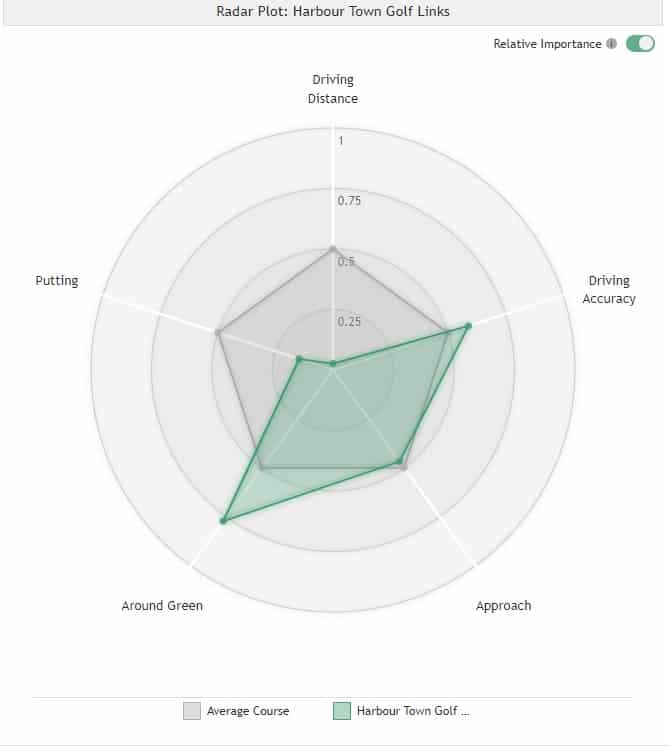 As expected, there’s no correlation between big and short hitters at the top of the leaderboard. In fact, Harbour Town might be a golf course that actually favors shorter hitters. There are holes where they’re short enough off the tee to still allow them to hit driver. For a bigger hitter, however, they’ll have to hit a fairway metal or iron. There also isn’t much correlation between poor and good putters at the top of the leaderboard.

But from the chart above, the strongest correlation towards the top of the leaderboard is accuracy and around the green game. That makes perfect sense. Harbour Town features tight, tree-lined corridors. Hitting out of position off the tee means little chance to hit the green in regulation. And with the second smallest greens on the PGA Tour, players will have to scramble for par more often than not. Plus, Harbour Town actually features the second easiest greenside surrounds relative to scoring. As such, better scramblers can take advantage of these easy conditions. Sloppy and deficient ones will cost themselves strokes.

Next, let’s look at the approach shot distribution chart, per DataGolf:

Harbour Town has a very clear approach shot distribution chart. There is a heavy concentration of approach shots between 125 and 200 yards. From this range, players will their approach shots at an above average rate to PGA Tour standards. There are very few flip wedges into greens. And not many approach shots over 200 yards into greens. This is primarily due to the nature of the Par 5’s, particularly Hole No. 15. If a player finds themselves out of position and in the trees, the hole automatically becomes of a three shot variety.

Lastly, here’s the Top 10 players in the field who have gained the most strokes per round at Harbour Town (minimum of 10 rounds):

All these players share similar traits. None would be described as bombers off the tee. And there’s a wide variety of talent with their putters. But almost all of them are really good scramblers and relative accurate. This list is a great preview of what to expect at the 2022 RBC Heritage.