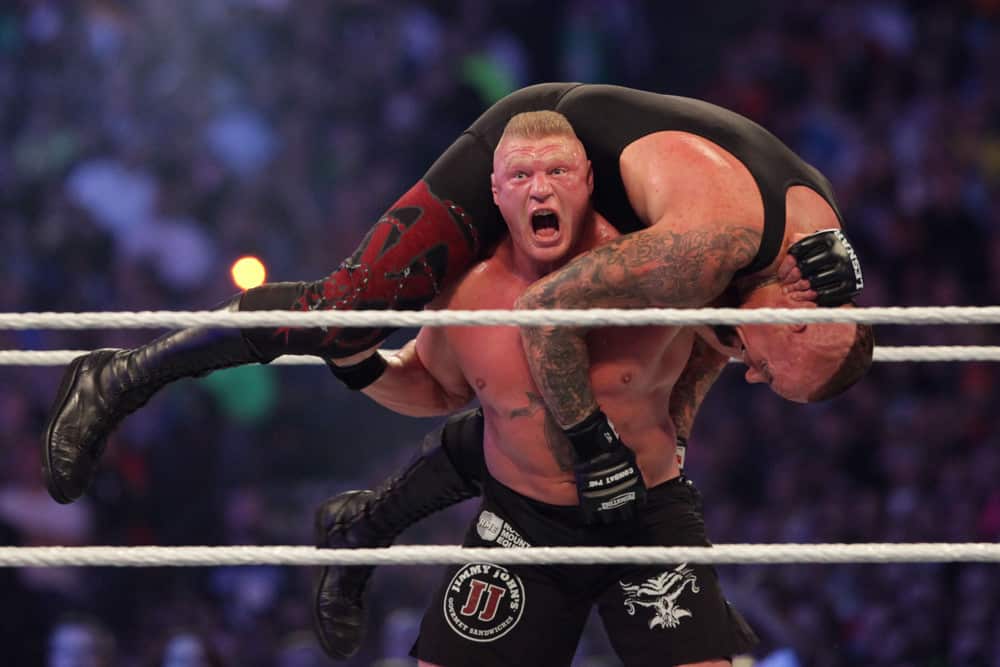 It’s time once again for the WWE’s biggest weekend as WrestleMania 38 takes to At&t Stadium this Saturday and Sunday. Titles will be on the line and grudges will be settled in the greatest spectacle in sports entertainment. For those of you who are able to toss a little action on this weekend’s matches, these WrestleMania 38 Betting Picks will help you figure out where to place your bets.

On March 3rd, live on Pat McAfee’s show, Vince McMahon, CEO of the WWE offered the former NFL punter a chance to wrestle on the grandest stage of them all. The next night on SmackDown, Austin Theory announced that he would be the one on the opposite side of the ring for the match.

A week later, Theory showed up on SmackDown again to antagonize McAfee. It worked. McAfee jumped up from his broadcast booth and put a beating on McMahon’s protégé. The SmackDown announcer was forced to apologize in order to keep his match. Needless to say, it wasn’t a heartfelt apology, and only served to worsen the feud.

The obvious play here would be to have the actual, RAW rostered wrestler win this match over a punter with a microphone. But, WrestleMania is not a house show or a normal Friday night. This will not be a barn burner, but you can find McAfee as a WrestleMania 38 Betting favorite to win right now, which could signal enough shenanigans this weekend to hand him a victory.

At the Royal Rumble, Rousey returned to the WWE. She immediately leapfrogged the entire SmackDown women’s division for a shot at the title by winning the Royal Rumble earlier this year. The Baddest Woman on the Planet entered the ring 28th. She cut her way through the field until it was down to just her and Flair left in the ring. Flair charged, Rousey reversed an attempt at a boot to the face and sent her opponent over the edge for the win. Having won the Rumble, Rousey wasted no time in claiming her title match at WrestleMania.

A look into @RondaRousey & @MsCharlotteWWE's feud.

While it would feel good for the proud mother to win in her first WrestleMania back in the squared circle, it doesn’t make much sense. If the WWE is good at one thing, it’s drawing out a storyline. The best move here is to let Flair retain her title and give Rousey and her fans something to chase after until SummerSlam. Even better, try to find the Champ as an underdog as Flair is listed on some books.

At last year’s SummerSlam, Becky Lynch interrupted Belair’s scheduled title match with Carmella. The Man tossed Carmella from the ring and issued a challenge for the Championship right then and there. One fake handshake and a manhandle slam later, Lynch pinned the Champ for win. With that, she announced her comeback to the WWE. After seven months of build ups, the EST of the WWE will get another crack at The Man to get her title back.

This feud has been well set up with plenty of heated promos and matches between the two. The only logical conclusion to this rivalry is to put Belair back on top of the RAW Women’s division. The former Champ was robbed by Sasha Banks at Extreme Rules. She was then knocked out by turnbuckle by Lynch in a title defense at RAW shortly after. At the end of this match though, “Becky Two Belts,” should be “Becky No Belts,” as she will fall to the sole survivor and the winner at Elimination Chamber.

The winner of this match will walk out of the ring with both the Universal and the WWE titles. Lesnar made a thunderous return to the WWE at SummerSlam to set up yet another showdown in the storied history between these two perennial champions. Dubbed as “The Biggest WrestleMania Match of All Time,” this will no doubt live up to the hype. This will be the third WresltleMania in which these two have locked horns. The Beast holds the edge in the previous two.

There is no telling how many times the WWE can continue to roll Lesnar out for these kinds of matches. Really, the answer is probably as long as fans will continue to have an appetite for it. That said, having Reigns leave WrestleMania with both titles opens far more storyline possibilities down the road. He’s the heavy WrestleMania 38 Betting favorite to win this match, and should end the night with the win to back it up.