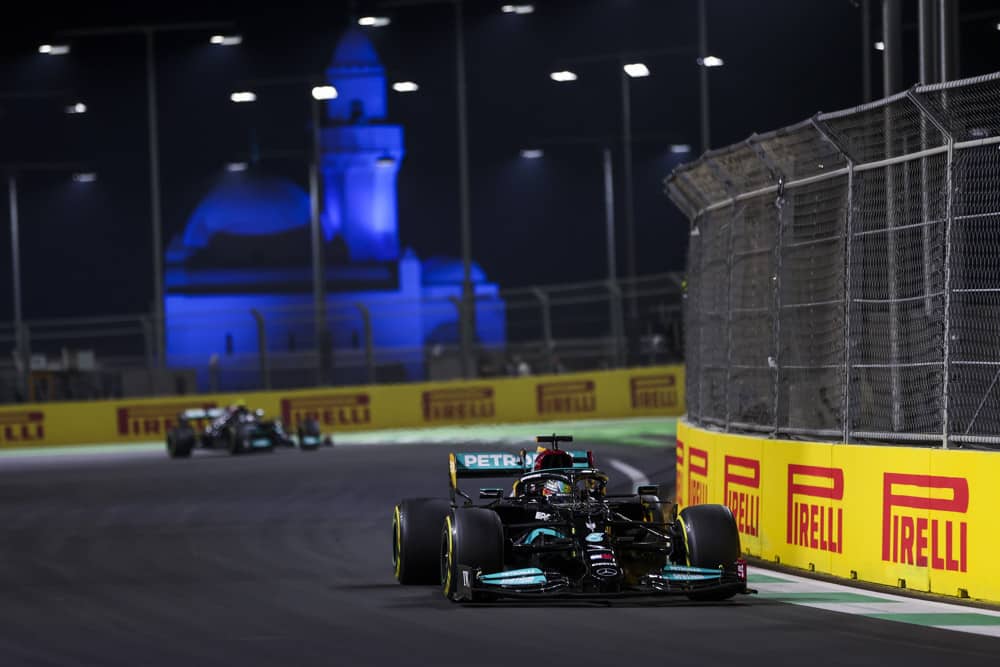 Race number one is done and the F1 season is underway! Charles Leclerc snagged the win at the Bahrain Grand Prix as Ferrari finds their first victory since the 2019 Singapore Grand Prix. Crazy enough, Ferrari also finished 1-2 that day. They did it here also with Carlos Sainz brining home 2nd place and Lewis Hamilton rounding out the podium. Both Red Bull racing cars retired late in the race after steering issues plagued them both. This will be something to watch going forward and especially in this week’s Saudi Arabian Grand Prix.

This week the series heads to Saudi Arabia for just the second time. The 6.174 km (3.836 mi) track held its inaugural Grad Prix in 2021, won by 7-time champ Lewis Hamilton and Mercedes. Saudi Arabia’s track has more corners than any other in the championship and its snaking layout means a bigger danger factor than almost anywhere else. So dangerous in fact that in the brief interval since last year’s race the barriers have had to be moved back in a couple of places to improve driver sight lines. Throw in new cars and steering issues, this weekend could get crazy.

Nikita Mazepin was scheduled to continue driving for HAAS in 2022. But, after the Russian Invasion of Ukraine HAAS F1 owner, American Gene HAAS, decided to fire Mazepin “because of the broad issues his inclusion was causing for the team.” That led to the team calling up 29 year old Magunssen from retirement to return to the team he last raced for. It didn’t take long for Magunssen and HAAS to show they are here to play in 2022. Scoring a 5th place finish in Bahrain, something that was a shock to most, look for this HAAS team to continue to be competitive. Led by Magunssen, a top-6 is not out of the question in Saudi Arabia.

The French born Ocon finished 4th just missing out on a podium by .100 seconds finishing behind Valtteri Bottas. Last week in Bahrain Ocon showed his Alpine race team still has speed finishing right behind Bottas again in 7th. This is juiced up a little for good reason, Esteban Ocon should be battling around in the top-10 all day.

Mercedes struggled in Bahrain, but a struggle for Hamilton is still a podium finish. He won here last year, and the 7-time champ knows the twists and turns of this tricky track. His odds to win are a similar 10/1 bet that I will also lay a little on because how can you not with such a great driver? But I don’t think it’s that far fetched he can lay down a fast lap during this race. Even if he doesn’t win you can still cash a 10/1 ticket, and if he wins the Saudi Arabian Grand Prix maybe you can cash two of them!

Ferrari kicked off the season with the 1-2 sweep and head into the weekend as the Manufacturer favorite (-120). Leclerc got all the glory last week, Sainz was 8th here last year in a down season for Ferrari. Sainz is still searching for that first F1 win, I think the script is flipped this week and Sainz finds himself holding the Saudi Arabian Grand Prix trophy Sunday.

This is a long-shot for a reason, it’s less then likely to happen. But what a story it would be? A comeback for all time! I made my case above for why I like Magunssen for a top-6. Maybe if things get crazy at the end he can pull off the stunner. And at 80/1 it’s worth a sprinkle.