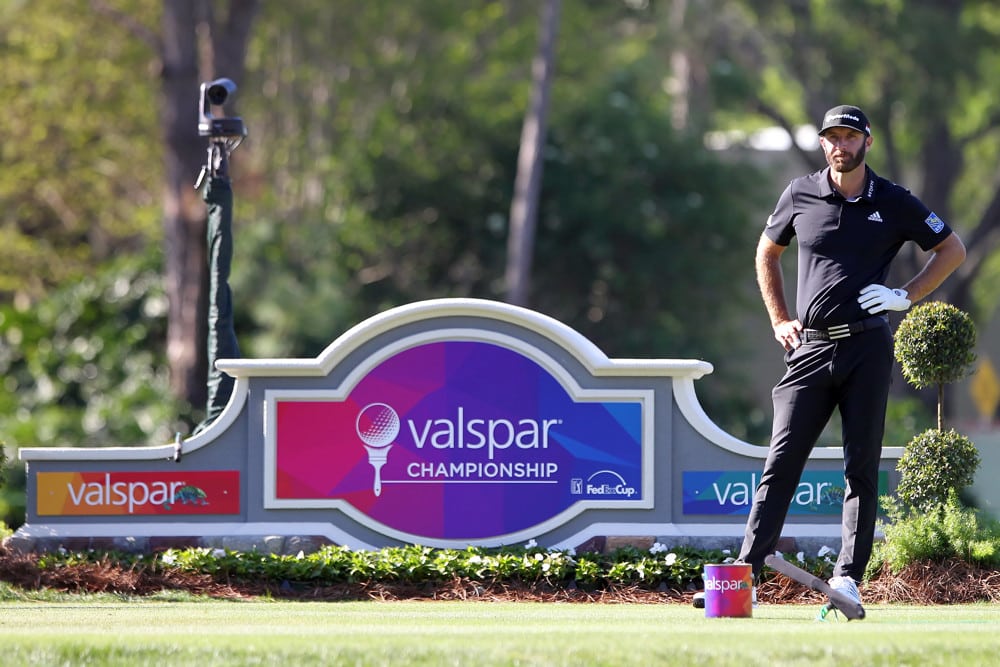 The field for the Valspar Championship is up in the air. With the PLAYERS Championship facing a Monday finish at best, some top players may opt to withdraw from the Valspar. But there should still be some decent talent in the field who will play due to sponsorship commitments.

One such player who definitely will play next week is Xander Schauffele. Per inside sources, Xander was committed to the Valspar Championship if he made the cut at the PLAYERS or not. Xander will not make the cut, which means he’s good to go to tee it up at Innisbrook. Xander Schauffele typically doesn’t play the Florida swing, and this will be his first time at the event. The Copperhead Course isn’t easy for anyone. Xander might be behind the eight-ball this week.

Other notables in the field (for now) include Dustin Johnson, Justin Thomas, Collin Morikawa, and Viktor Hovland.

The Innisbrook Resort and Golf Club opened in 1970 just north of Tampa, FL. The club has four golf courses on the property, with the most famous being the Copperhead Course. All four golf courses were designed by a man named Larry Packard. He may not be the most recognizable architect in the United States, but he has a remarkable story.

In the Great Depression, Larry Packard became passionate about agronomy and landscape architecture. One of his first jobs was to plant grass along a two-mile runway at the Westover Field Air Base. The precision and care he did in planting it was noticed by the U.S. Government, and soon enough he was contracted to plant grass at several of their military bases. He also was very influential in coming up with breakthrough camouflaged techniques for the air bases during World War II to prevent enemy attacks. He did such a good job that pilots often admitted they had trouble finding the runways to land.

After the war ended, Packard launched himself into golf architecture under the tutelage of Robert Bruce Harris. Over the next 50 years, Packard built over 350 golf courses, with a significant concentration in Chicago and the surrounding Midwest.

But of all the golf courses he designed, the Copperhead Course at the Innisbrook Resort is by far the most famous and his crowning achievement:

One of the most interesting features of the golf course is its hilliness and elevation changes to it. That’s not something you typically expect from a Florida resort course. But the Copperhead Course offers some pretty good elevation changes tee-to-green, both uphill and downhill. It’s not dramatic by any means, but it certainly differentiates itself from most other flat golf courses in the state.

The golf course also utilizes dog legs very well. Only one hole on the golf course (#10) doesn’t have some semblance of a dog-leg characteristic in it. Packard also did a very nice job utilizing water hazards, tree lines, and bunkers around these dog-legs to make for a challenging tee shot that demands accuracy. Packard’s hallmark signature on a golf course is the double dog-leg, which is on full display on the Par 5 14th hole. The double dog-leg is now a popular feature in golf architecture, many of which are seen on Jack Nicklaus-designed golf courses.

Speaking of Jack Nicklaus, Copperhead has a notorious three-holed animal-themed stretch like PGA National does to its south. Holes 16-18 are known as the Snake Pit and is a very difficult closing stretch to the course: 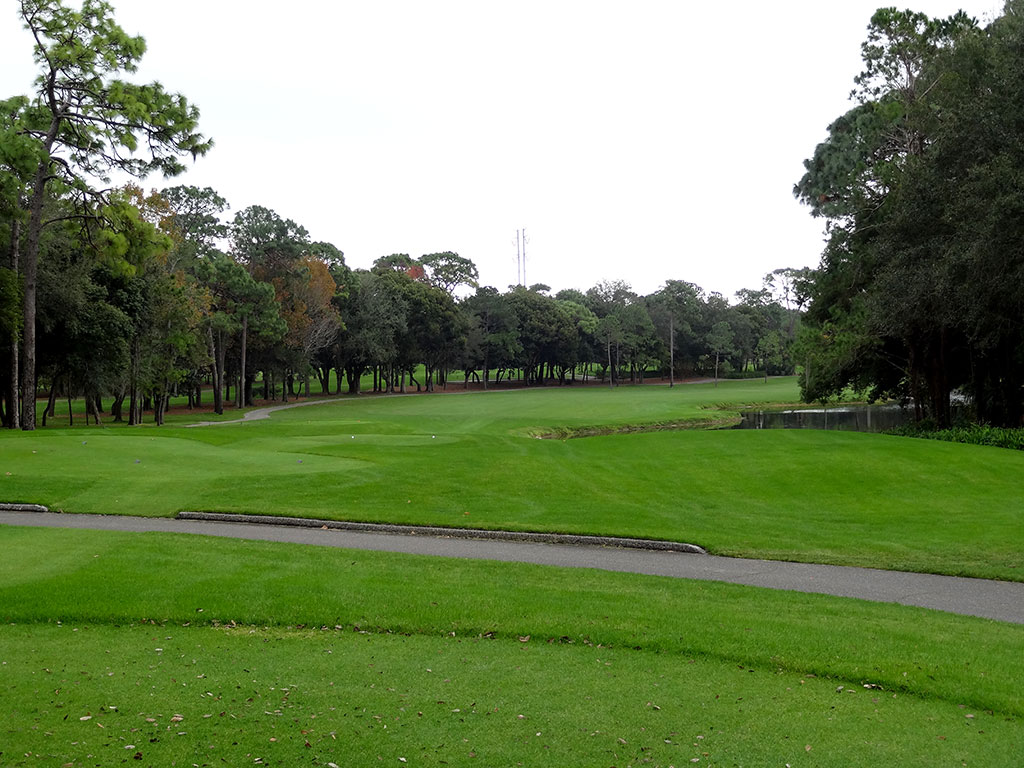 This long par 3 is heavily guarded by challenging bunkers on almost all sides. While the green is larger than most others on the golf course, it’s not an easy one to hit in regulation by any means. 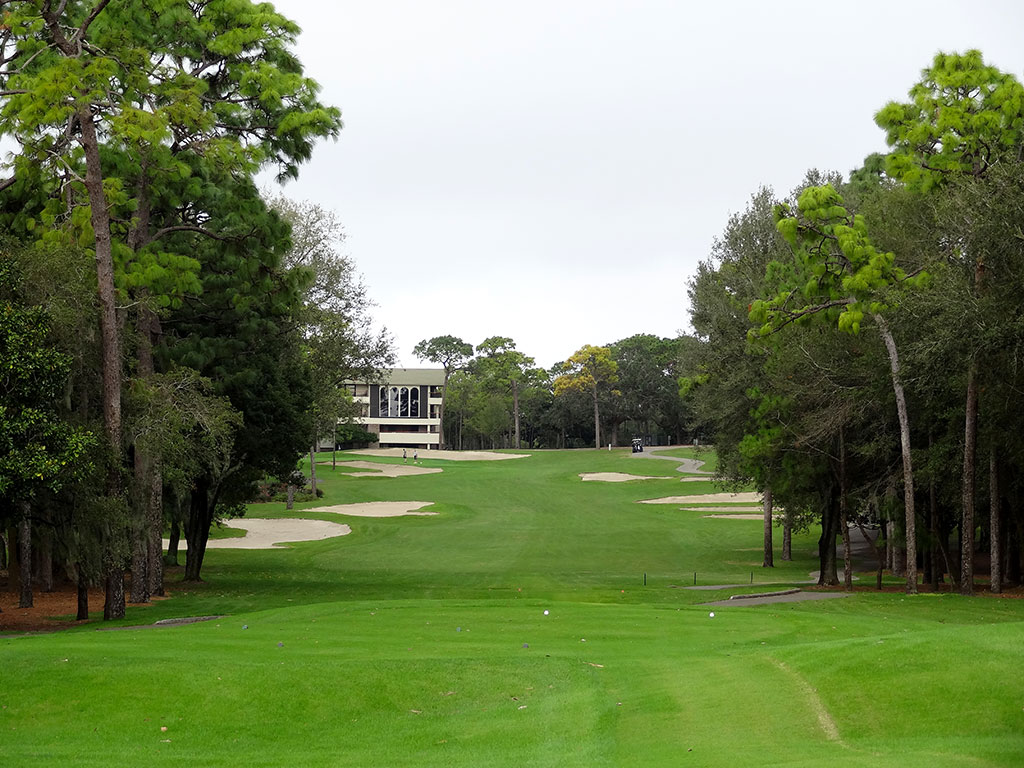 Another very intimidating tee shot to close out the round on the Copperhead Course. Any tee shots that find their way into the bunkers on the left don’t stand a great chance to hit the green in regulation. While a shot into the bunkers on the right provides for a good look at the green, they’re all very narrow. Golfers must get the ball up quickly in order to fly over the lip and onto the green. While hitting into the front greenside bunker is a safe bailout, balls that fly into the back bunker are a death sentence. The greens slope significantly from back to front and make for a very challenging up and down from the back of the green.

Overall, this is a very stern test for the PGA Tour. The golf course is very narrow and presents lots of pitfalls, especially off the tee. The winning score at this event has only exceeded -10 once in the last seven Valspar Championships. The Copperhead Course at Innisbrook has stood the test of time to still challenge the best players in the world.

Before we get into it, let’s quickly discuss the 2021 Valspar Championship. That tournament was played at the end of April. Though the golf course was billed as overseeded, reports from the ground suggested that the Bermuda was beginning to emerge from dormancy. The fairways weren’t overseeded at all. And the greens had a lot more Bermuda in them than the poa trivialis. And, naturally, Sam Burns (a Bermuda specialist) won the tournament.

As such, referring to last year’s tournament might not be a great guide. Now that the tournament has returned to mid-March, the climate is still too cool to support healthy Bermuda growth. Expect a return of the typical rye overseeded rough and fairways with poa trivialis overseeded greens.

With that said, let’s start with some other nuts and bolts about the golf course. The Copperhead Course at Innisbrook measures just over 7,300 yards long. It plays as a Par 71, however it still has four Par 5’s. An additional Par 3 brings the par down a stroke. It has the fifth-lowest average driving distance on the PGA Tour. That heavily suggests it’s a less-than-driver golf course. It is also the third most difficult course on the PGA Tour off the tee. Players on average lose far more strokes off the tee than the average event.

While the golf course doesn’t have too many penalty areas and the rough itself isn’t all that penal, one can’t be too far offline. Each hole is heavily tree-lined. Chances are if one is very off line, their ball will rattle around in the trees and can go all sorts of directions. There’s a margin for error off the tee, but anything outside of it is big trouble. Conservative play by clubbing down is typically the optimal strategy.

Next, let’s look at the relative skill set chart for Innisbrook per DataGolf: 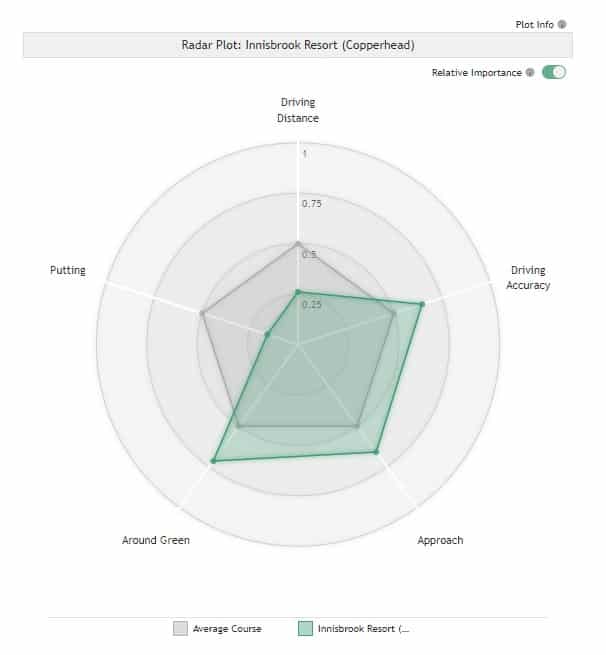 This is a ball striker’s golf course. There is a high correlation of great driving accuracy, great iron play, and great scrambling at Innisbrook to how the top of the leaderboard shakes out. Driving distance isn’t as important because so many holes require less than driver. And there isn’t a good correlation between great putters and poor ones at the top of the leaderboard. Given who has fared well in this tournament (as discussed below), this is absolutely a #TeamNoPutt type of golf course. Consistency tee-to-green is an absolute must at Innisbrook.

Next, let’s look at where players will hit their irons shots from, per DataGolf:

There’s a heavy emphasis on intermediate and long approach shots at Innisbrook. Though the golf course stretches over 7,300 yards, players will keep the driver in the bag more often than they typically do. Players will be tested from 150+ and 200+ yards a lot.

In addition, four of the five Par 3’s play over 200 yards, with the last playing 195 yards. And while not all the Par 5’s are reachable, there are a few where players can attempt to go for the green. Some of the best ball strikers on the PGA Tour are fantastic with their intermediate and long approach shots. No wonder this golf course heavily favors those types of players this week.

But we can’t completely just throw out putting this week. While the best ball strikers generally rise to the top of the leaderboard, it’s those who putt the best in the tournament are the ones who ultimately prevail. That’s very apparent in the variation of scoring at the golf course:

Lastly, here are the Top 10 players in the field who have gained the most strokes per round at Innisbrook:

This list almost perfectly encapsulates the relative skill set chart above. There’s a mix between long and short hitters. There’s also a mix of good and poor putters. But almost all these players are premier ball strikers. They’re consistent, accurate, and deadly with their intermediate and long irons. This list is a great preview of what to expect at the 2022 Valspar Championship.