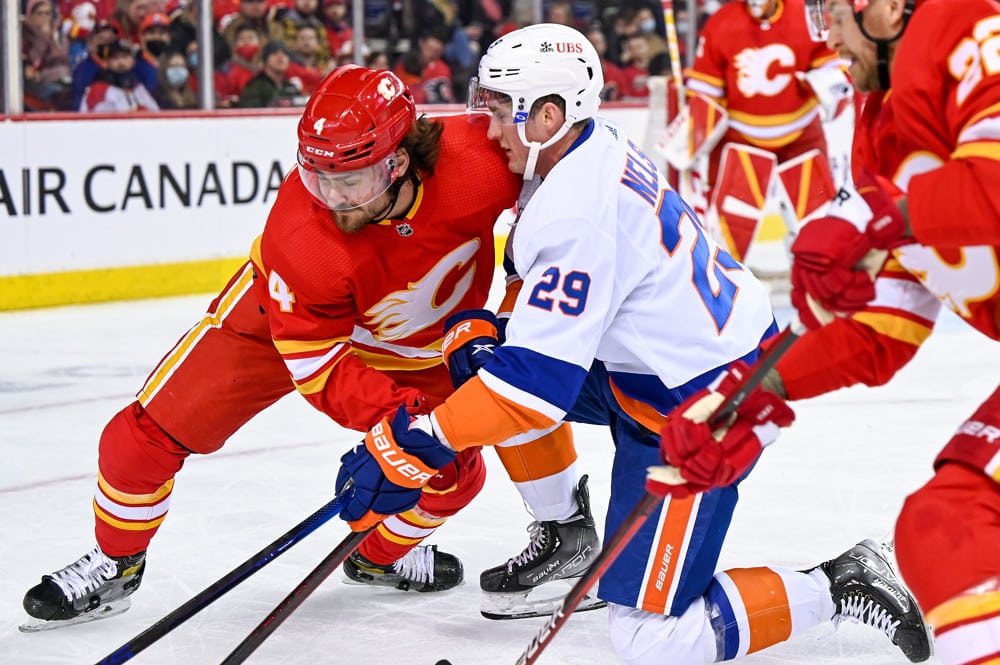 Welcome back to the Fantasy Hockey Waiver Wire: Teams to Stream & Best Pickups article! Week 20 is jam-packed with most days having double-digit games. I’ll be your guide to help you win your fantasy hockey matchup this week with the best pickups, goalie options, teams to stream, and teams to avoid.

There are 14 teams that play at least four games this week, but only one team plays five times. However, with there only really being three “light nights” (Monday 5, Wednesday 2, Friday 4) it’s going to be important to roster players that are playing on those nights. I’ve taken a closer look at some of those teams with players to watch on the waiver wire, claims to make off waivers, and the best pickups for the week. If you are in a shallower or deeper league –– or just have a question or comment –– feel free to reach out to me on Twitter (@RGilbertSOP), in the Reddit comments, or in the SGPN Slack!

The Flames play a whopping five times this week, but only once on lighter nights. Still, Calgary is a team worth targeting for this week; especially in the crease with two back-to-backs

Okay, Mangiapane isn’t available in many leagues due to his hot start to the season. However, some fantasy hockey managers may have given up on him when he had just five points in 18 games from November 23rd to January 24th. Since then, he’s red-hot again with 19 points (11 G, 8 A) in 17 games. Ride him while he’s hot.

Toffoli has fit in nicely with Calgary, and while he’s available in less than half of leagues, he’s on the radar for this week. The winger has eight points (5 G, 3 A) in nine games with the Flames. He had six points (3 G, 3 A) in three games prior to being held off the scoresheet in Colorado.

Coleman is available in most leagues and has been putting up some points recently. He doesn’t get power-play time, so that could be an issue, but he’s been scoring in 2022. He has 19 points (8 G, 11 A) in 25 games, including six points in his last six games.

The Flames have two back-to-backs this week, so Vladar should see some action. The first set (EDM Monday, WSH Tuesday) isn’t as friendly as the one to end the week (DET Saturday, COL Sunday), but Vladar has been decent this season –– and the Flames are hot. He is 8-3-1 with two shutouts, a .904 SV%, and 2.87 GAA in 11 starts this season.

The Blue Jackets are one of two teams playing four times this week with two of those games falling on the lighter nights. They also have a back-to-back in the mix, so a backup goalie should get a start.

I’m banging the Boone drum again. The Columbus captain had 11 points (4 G, 7 A) in 10 February games and already has three points in three March games. He’s a sneaky-good option that is a point-per-game player over the past two months with 24 points (11 G, 13 A) in 24 games since January 8th. Jenner has averaged nearly three shots a game in that span with 72 SOG in those 24 games.

If you’re in a league where goals are weighted heavily, look away. Voracek is an assist machine. He has 39 apples and just three goals for 42 points on the season. The longtime Flyer is thriving with a sniper like Patrik Laine on his line. He is over a point-per-game in the past few weeks with 15 points (2 G, 13 A) in 14 games. Voracek will rack up the assists for you.

Bjorkstrand plays on the second line but he joins Jenner and Voracek on the top power-play unit. He’s starting to pick it up recently, just as the Jackets have, with 11 points (7 G, 4 A) in 13 games since the All-Star break. He has 33 SOG in that time as well.

Speaking of the Isles, they’re the other team that has two of their four games on lighter nights this week. They have one back-to-back against the Blue Jackets and Jets on Thursday/Friday.

The Dobson train is picking up steam. I highlighted him two weeks ago when he was rostered in 38% of leagues.

Dobson is up to 28 points (10 G, 18 A) on the season with half of those points (5 G, 9 A) coming in his last 18 games. The young defenseman is growing into a larger role with the Isles and should be doing the same for your fantasy hockey team.

Nelson has also seen a resurgence recently and he’s rostered in less than one-fifth of leagues. He’s at 30 points (20 G, 10 A) in 43 games, just three points shy of his total last season in 56 contests. Nelson has picked it up in his last nine games with seven points (five goals, two assists) in that span. He won’t single-handedly win you your matchup, but he’s a great option in deeper leagues –– especially playing on Monday and Friday.

Palmieri is making the most of his chance on the top line. Half of his season total in points have come in his last 10 games with seven points (six goals, one assist). He had a three-game point streak prior to Saturday and is worth a look in those deep leagues.

Ilya Sorokin has played his way into the starter’s role for the Islanders, leaving Varly as the backup. He should get a start this week against either Columbus or Winnipeg, so he’s worth a look if available in your league.

The Oilers’ players worth having should already be rostered in your league. Evander Kane (76%) and Zach Hyman (71%) may be available in shallow leagues.

Canucks captain Bo Horvat (65% Rostered) has had a better second half than first. Tanner Pearson (4%) was recently promoted to the top line and has eight points (5 G, 3 A) in his last seven games.

There aren’t many players in the middle-tiers on the Capitals worth rostering right now. Nicklas Backstrom and T.J. Oshie are struggling. If you want an option in deep leagues, Conor Sheary (2% Rostered) is on a three-game point streak (3G, 2 A) and is getting time on the top line and second power-play unit.

The NHL is getting back to a busy schedule, but two teams only play twice this week.