What the 2021 NFL MVP Race Means for Matthew Stafford 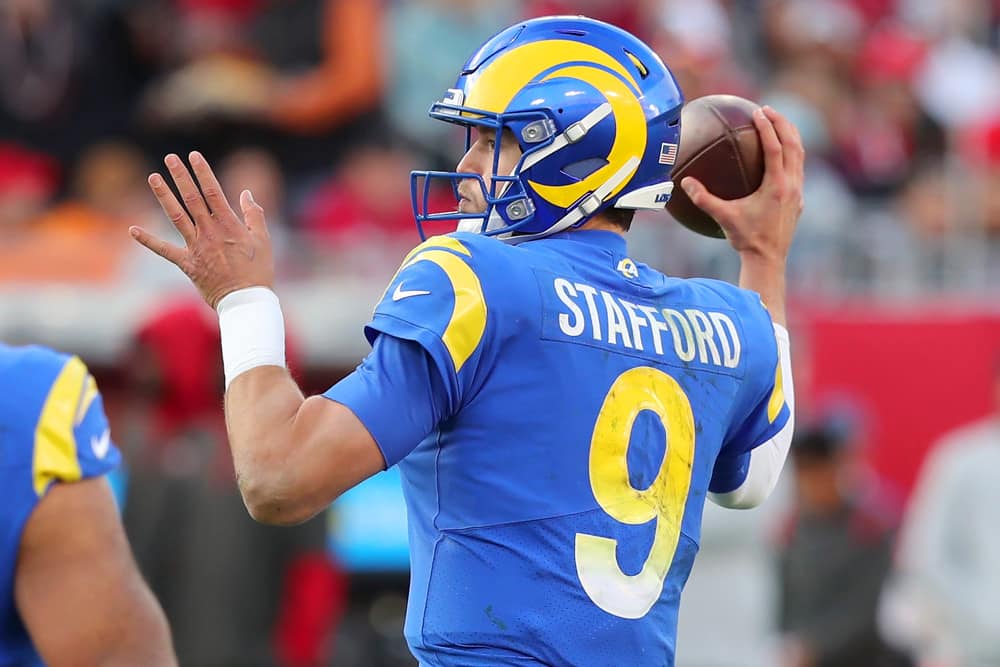 The Super Bowl LVI is just around the corner after an exciting season. While the Superbowl is yet to be decided, some believe that the MVP for the season has already been chosen. The Los Angeles Rams had an excellent season, reaching the Super Bowl after winning the NFC title. This will be the first time they’ve appeared in the big game since 2019, and they’ll have an advantage here as the game will be played at the SoFi Stadium in Los Angeles.

Part of the reason for the Rams’ success has been Matthew Stafford, their thirty-four-year-old quarterback. Stafford, who was drafted from the Detroit Lions at the start of the season, had an excellent run of games. The quarterback finished second in the league for touchdowns, scoring forty-one, while also throwing 4,886 yards, the third in the league.

Stafford was a key part of the Rams’ offense, which was also helped by wide receivers Cooper Kupp and Odell Beckham Jr. Now, the Los Angeles Rams return to the Super Bowl for the first time since its No. 2-ranked offense was held to a field goal in a 13-3 loss to the New England Patriots in Super Bowl LIII.

Throughout the season, Stafford’s efforts put him in contention for the year’s MVP award. The season’s MVP will be announced at the NFL Honors on Feb 12. According to the odds at Betway, Rodgers has the best chance of winning the awad. However, Stafford still had a great season and was ranked highly in the first few weeks. You can check out the full 2021 MVP race breakdown at Betway, but here’s a summary of how Stafford did.

Stafford started the season fifth in the MVP rankings, with odds of +1600. The Rams were considered a Super Bowl contender from the very beginning, which is why his chances were rated so highly.

At the beginning of the fourth week of the season, Stafford found himself rated as the favorite to win the MVP award after an excellent performance against the Tampa Bay Buccaneers. Stafford scored four touchdowns in that game as the Rams won 34-24. However, the Rams would later lose to the Cardinals, with MVP rival Murray scoring highly, denting Stafford’s chances.

In the eighth week of the season, the Rams picked up their fourth convincing win in a row. At the same time, Stafford had his second consecutive week, scoring three touchdowns with zero interceptions. As a result, he was once more placed in the top five players with a chance to win the MVP award.

What Does This Mean for Stafford Next Season?

While Stafford and the Rams had a strong start to the season, their offense faltered a bit in the second half of the year, leading to a dropping EPA rating. The final nine games of the season saw Stafford’s passes intercepted thirteen times, including seven in the last three.

Stafford’s aggressiveness and habit of taking shots downfield began to hurt the team’s success, which was only increased when Darrell Henderson suffered an injury. This then hampered the team’s inconsistent run game, leading to an overreliance on passing.

Defenses had caught on to the tactics, adopting the two-deep coverages that several had used to frustrate the league’s big-arm quarterbacks and dropping seven to entice Stafford to make poor decisions and forcing McVay to be more creative.

Stafford is currently the favorite to win MVP at this weekend’s Super Bowl. However, it remains to be seen whether he can improve on his performances from this season to have a better chance of winning the NFL’s MVP award next year. If he can improve decision-making and pick better passes to be more consistent, he has a great chance. It will also depend on whether the Rams are successful or not in the Superbowl, which will affect the team next season.