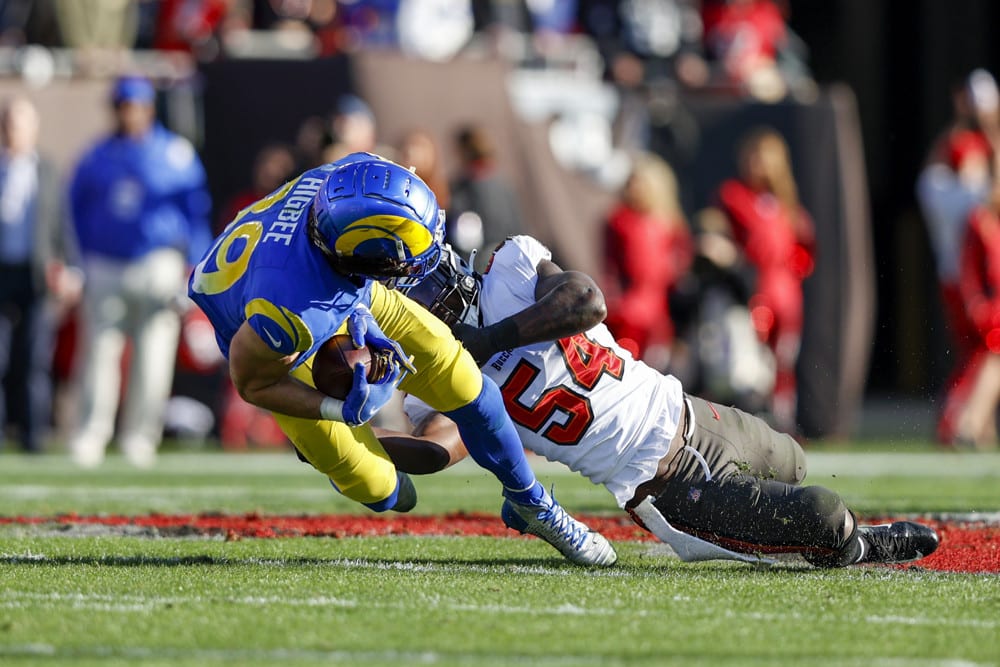 Well, it all comes down to this. The game for all the marbles. The game NFL players and sports bettors train for all year. Super Bowl LVI is here. It’s a bittersweet moment to be writing the last injury report of the year. It’s been a great first ride and I’m excited to improve and help you all bank even more money next year. As a parting gift for the season, this week’s injury report will include all players with injury concerns heading into Sunday. We’ll break down all the injury news and updates up until kickoff to give you an edge. Welcome to the Super Bowl LVI injury report!

Between the two teams, there is only one starter in serious danger of not being able to play at all Sunday. That is Los Angeles Rams starting TE Tyler Higbee, who leads off this Super Bowl injury report. Higbee took a hard hit to his knees in the first half of the NFC Championship. After struggling to walk to the sidelines, he was ruled out of the game and found to have sprained his MCL. The MCL is a ligament in your knee that provides stability, especially with side-to-side movements. A sprain just refers to damage of the ligament due to being overstretched by the force of the hit.

Minor MCL sprains do heal fairly quickly, in about 1-2 weeks. However, based on his practice status, this does not seem to be the case. As of Thursday (2/10), the Rams TE has been unable to practice in any capacity. This lack of activity indicates he is likely dealing with a grade 2 MCL sprain, which takes closer to 3-4 weeks to fully heal. At this point, I would not expect Higbee to be out there Sunday and if he is, he will be severely limited. The Rams will turn to rookie TE Kendall Blanton, who had 5 catches for 57 yards last week, to step up.

Higbee is unlikely to play this week with a knee sprain.

The Super Bowl injury report is a tale of the TEs this week. In a weird coincidence, both starting tight ends injured their knees in similar fashions Conference Championship weekend. Cincinnati starting TE C.J. Uzomah is currently dealing with an MCL sprain as well. However, it does appear that he is dealing with less damage to his ligament than Higbee. After being seen rehabbing with the trainers on the side of practice earlier in the week, Uzomah returned to practice today (2/10).

He was able to log a limited practice session Thursday, which is huge for his playing chances. The Bengals TE is a vital part of this offense as a big target over the middle. With no receiving threat behind him on the depth chart, his return to the field would be a major boost for this offense. Barring any setbacks, I do expect Uzomah to play Sunday but for him to be limited some. His cutting ability and route-running ability will be tested, but overall this is a big W for the Bengals this weekend.

Uzomah is trending towards playing this limited, will likely be limited.

Los Angeles WR Van Jefferson has become a much more important part of the offense with WR Robert Woods going down earlier in the year. Unfortunately, he has had a hard time staying off the injury report in recent weeks. A few weeks ago, he popped up on the injury report with a knee injury that caused him to sit out of practice. Jefferson was able to suit up last week but missed a considerate amount of time due to his knee flaring up during the game.

The nature of the knee injury is undisclosed but it seems that an extra week of rest may have done the trick. After several limited practices, the Rams WR practiced as a full participant Thursday (2/10). With a lackluster performance in the postseason so far, look for Jefferson to be more involved in the offense if his injury keeps trending positively.

Jefferson is practicing fully and likely to play.

This next player on the Super Bowl injury report probably wouldn’t be here if he wasn’t so important to his team. Top-tier CB Jalen Ramsey surprisingly popped up on Los Angeles’ injury report last week. He did not practice at all last Friday on the Rams only full practice of last week. Well, after logging full practices this week it appears this may have just been a load management case. There have been no reports on the type of “shoulder” injury or how it happened at this point. The injury is worth following closely this week due to Ramsey’s defensive impact, but I fully expect him to be healthy and play. It looks like Bengals WR Ja’Marr Chase will have to earn his catches the hard way this week.

Ramsey is fully practicing this week and is good to go.

The fact that I am writing a Cam Akers injury update and it is NOT about his Achilles is remarkable. After a remarkable return to the field this season his play has been up and down. He hit a bump in the road last week, injuring his shoulder and exiting the game for a brief period. The good news is he was able to return to the game and handle double-digit carries.

The type of shoulder injury he is dealing with is undisclosed but it appears to be minor and likely an AC sprain. In minor cases, these typically heal in 1-2 weeks and do best with some rest. After not practicing at all last week (AKA rest), Akers had a limited practice Wednesday (2/9) and a full one Thursday (2/10). The Rams are likely to be able to rely on Akers for double-digit carries again on Super Bowl Sunday.

Akers is dealing with a minor shoulder but is expected to play.

This injury report updates until Super Bowl LVI kickoff. Make sure to stay up to date on all the latest injuries this season over on Twitter @SGPNFootballDoc!