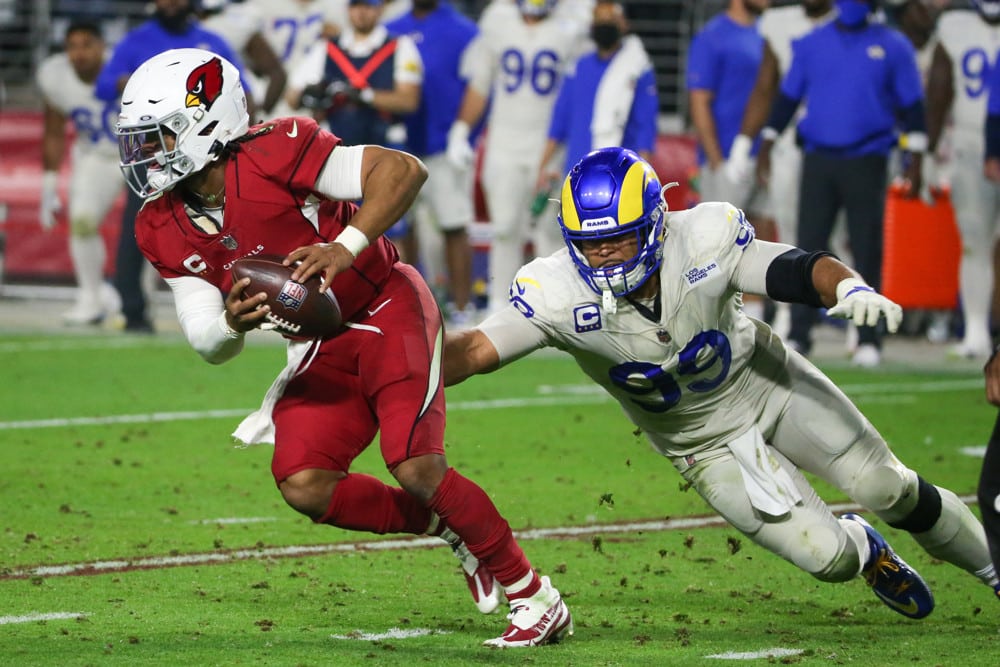 If you thought the Sports Gambling Podcast would take a week off from NFL DFS because there are no playoff games this weekend, think again. If there is one thing for certain in a Pro Bowl, there will be points scored. Since 2000 there have been 23 instances where a team put up 30 points. This is a fantasy player’s wet dream. So, let’s dive headfirst into my ideal DraftKings showdown lineup for this year’s Pro Bowl.

The wide receivers and tight ends are loaded for each squad. As a result, it will be hard to draft the correct receiver that’ll light up the scoresheet during the game. As for the starting running backs, Jonathan Taylor has the clear edge in my eyes against Dalvin Cook. I’d take Taylor but he is the most expensive player on the roster listed at $14,700. Taylor will not get enough handoffs during the Pro Bowl to justify this price. Therefore, we are left with the two starting quarterbacks, Cardinals’ Kyler Murray (NFC) and the Chargers’ Justin Herbert (AFC).

The captain I’m drafting here is Kyler Murray. With Murray’s rushing upside, and better pass-catching backs (Dalvin Cook, James Conner, and Alvin Kamara) he is a better Pro Bowl fantasy option. Nearing the end of the regular season Murray’s quality of play dipped. The Pro Bowl is a great opportunity for Kyler Murray to leave a good lasting image going into the offseason.

If you want to be contrarian a good Pro Bowl DraftKings DFS option would be Patrick Mahomes. The Chiefs’ QB can be mobile when you need him to be, but maybe most importantly, Travis Kelce is on the AFC roster as well. You can bet that when Mahomes subs in for Herbert, Kelce will be on the field with him. If you saw Kansas City’s 13-second game-tying field goal drive against Buffalo you’d know these two are on another level when working together.

Who in the country didn’t fall in love with Deebo Samuel’s playstyle and talent during the San Francisco 49ers playoff run? Deebo is like a toy from the movie Toy Story that ended up in Sid’s backyard. Sid (Jimmy Garoppolo) doesn’t belong playing with a cool toy like Deebo Samuel, Andy, or in this case, Kyler Murray does! My prediction is that division rivals, Murray and Samuel, will turn into Pro Bowl best friends just like Woody and Buzz Lightyear grew to like each other throughout the 1995 flick.

Tyreek Hill calls himself the cheetah because he thinks he is the fastest man alive. His reputation may have taken a slight hit after he lost in a 40-yard dash to Dallas Cowboys linebacker Micah Parsons. Hill should slot in perfectly as Justin Herbert’s Mike Williams-like deep threat. We may see the cheetah throw up the deuces on his way to a +30-yard touchdown to get his payback.

Justin Jefferson should feel comfortable in Las Vegas because he’s bound to put up points with Kyler Murray at QB, but the next sub up will be the Vikings’ very own Kirk Cousins. I know, Cousins isn’t an elite quarterback, but these two won’t have to spend any time in-game trying to gel. Who knows, maybe Russel Wilson comes off the bench for the NFC before Cousins. If that’s the case maybe the Minnesota duo will team up during crunch time late in the game for a touchdown and griddy celebration.

The Buffalo Bills stand-out wide receiver is a cheap option but a gamble I am willing to take. I’ll bet any money that we will get our fair share of Stefon vs Trevon Diggs matchups on the outside. Why would I want to pass up on that storyline? The one knock against the cornerback was that he wasn’t consistently good in coverage. If Trevon wasn’t picking the ball off, he was getting burned on a route. If anybody is an expert on Trevon’s weaknesses it is his brother Stefon.

The angle I have to support a Mark Andrews pick up is that Justin Herbert loves to look for his tight ends in the red zone. Los Angeles Chargers’ tight ends racked up eight touchdowns inside the red zone throughout the 17-game season. Other good news for the selection of Andrews is that Baltimore Ravens QB Lamar Jackson is on the roster. Jackson and Andrews will have opportunities to rack up fantasy points late in the game

If you are one who feels like they need a running back on their squad I am suggesting you scoop up Najee Harris. I predict that the AFC will be down a score or two late in the game. If that is the case Harris saw most of his production this season when receiving dump-off passes from now retired, soon-to-be Hall of Fame Steelers’ QB, Ben Roethlisberger.

I must warn you. Don’t draft all my Pro Bowl DraftKings DFS players because then we are going to have to split up that jackpot at the end. Good luck, and Let It Ride!