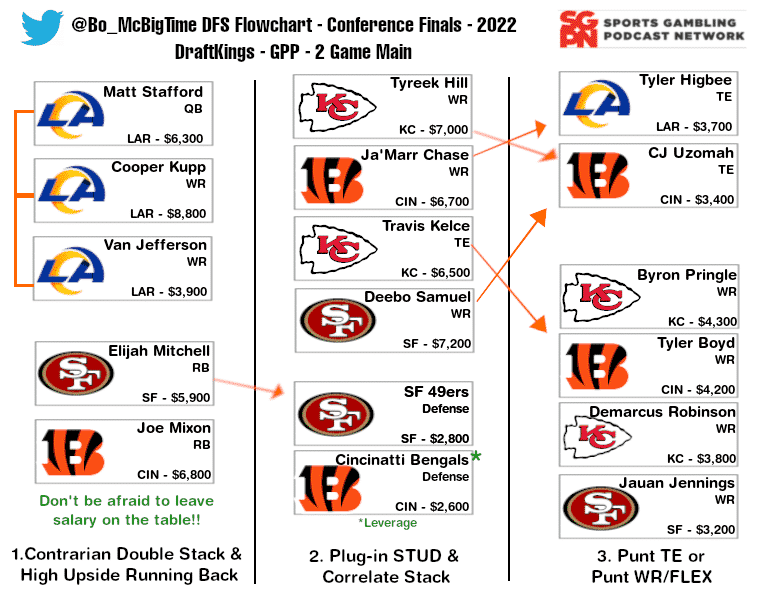 It was a hair-raising weekend in the NFL Playoffs. The 2022 Divisional Round is already widely considered the best weekend of professional football in the history of the sport. All four games were decided on a walk-off score. The fourth and final contest was an instant classic between the Kansas City Chiefs and Buffalo Bills from Arrowhead Stadium that exhumed the hatred for the most asinine overtime rule in sports and gaming.

For DFS purposes, the chalk hit with the energy of a nuclear warhead. The only way to take home any meaningful money was to go completely chalky and include ankle-busting, toe-dragging superhero Gabriel Davis. For those of you who took this approach, I commend you. The rest of us have an important decision to make on Championship Sunday. With only two games on the slate, some DFS players will build out their lineups from all four teams. Others will take on each game individually with Showdown Captain Mode. I am an unfettered DFS junkie and will risk my bankroll on a good amount of both. This column will examine some angles to be taken on the two-game slate.

I have been very outspoken about my distaste for the 49ers advancing to this round. That does not mean, however, that they don’t potentially hold the key to the DFS vault. Apart from their devilishly-handsome liability at quarterback, San Francisco has a very concentrated and predictable lava flow of fantasy points. Since many (including me) don’t think the Niners belong here, they might offer the only glimmer of hope for leverage on such a constricted slate.

The lower implied game total for the Rams and 49ers, compared to the Chiefs and Bengals, is also a considerable leverage opportunity. Kansas City and Cincinnati played to a 34-31 score in their meeting in Week 17, while LA and SF played games to 51 and 41. The whole world will be stacking the Bengals and Chiefs, for good reason. I will get chunks of that game while stacking the lower implied total with more predictable breakout performers.

The main detractor from my profits last weekend was getting too cute at the quarterback position. Thankfully, three of the four quarterbacks who will grace the gridiron this Sunday have elite fantasy upside. Without needing to worry about the quarterback position burning me again (thanks, Tannehill), it would be prudent to mention the viability of double or even triple-stacking this week with skill position players from one particular team.

As mentioned above, I will be stacking the Rams with some 49ers to get a tad different. Without retrieving Jimmy Garoppolo from the dumpster to play him, Matthew Stafford ($6,300) is the quarterback I will aim to stack with. Stafford has the ultimate stacking weapon on his team, along with some other pieces that have a premium matchup this week. I love Van Jefferson’s ($3,900) chemistry with the veteran gunslinger. Odell Beckham Jr. ($5,100) is a touchdown-scoring machine. I despise Tyler Higbee ($3,700), but he is still a stacking option with potential. It was surprising to see how incredibly popular Cam Akers ($5,000) is trending to be. The main driver must be his insanely-low salary.

Make no mistake, I will use a bargain Rams-49ers stack to hand-pick studs from the Chiefs-Bengals game. Tyreek Hill ($7,000), Ja’Marr Chase ($6,700), and Travis Kelce ($6,500) are all players with massive upside in the AFC Championship game that I will want to sprinkle into my lineups. Even Tee Higgins ($5,700) and Joe Mixon ($6,800) have enough firepower to blow my proverbial kilt up. I will not trifle with deciding between a refurbished Jet McKinnon ($5,100) or regrettable first-rounder Clyde Edwards-Helaire ($5,300).

Another method to mitigate duplicity in a winning lineup is to leave salary on the table. It’s an effective tool in Showdown tournaments, as well as small slates with extremely limited player pools. Since I don’t foresee going over the salary cap with my guys this week, it is wise to not try and force less optimal plays just for the sake of getting closer to the cap. This is especially difficult for someone like me who doesn’t even like to see a red notification number next to an app icon. Leaving salary on the table can easily trigger one’s fear of non-fulfillment. It helps to remember that it’s simply a limit to even the playing field. Every optimal lineup is simply a compilation of the best plays under the salary cap. We all get the same $50k to tell our story.

I believe the Bengals will upset the Chiefs, so I will lean more on Cincinnati weapons to complete my lineups. The Rams can be run on, so Elijah Mitchell ($5,900) and Deebo Samuel ($7,200) will be my run backs off a Stafford double stack. Pretend like you’re a grandfather with a gaggle of little ones gathered around you. You’re telling them the extravagant tale of your biggest DFS windfall in the Winter of ’22. Who were the stars? Who was the one guy you had to play and he had the game of a lifetime to propel his team to the Super Bowl? If you can picture the path to riches, make it so.