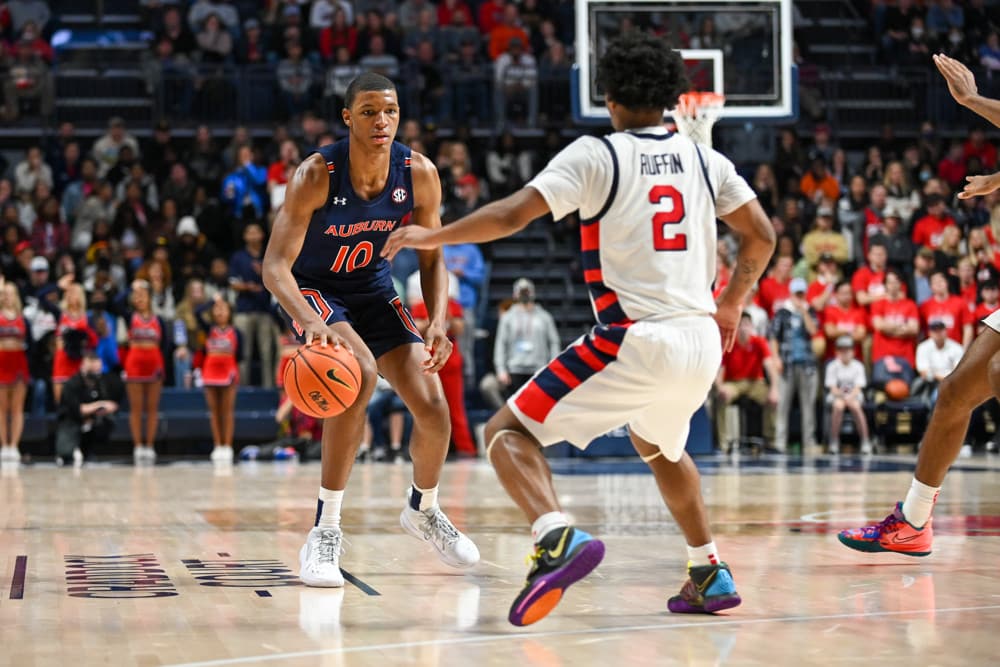 The Big 12 – SEC Challenge is upon us! This year we have some marquee matchups that I have a feeling will be some games to remember from the 2021-2022 college basketball season. This is a relatively new challenge dating back to 2013. The Big 12 is currently 4-2-2 over the SEC since 2013, and I think they continue to lead this series adding another win in their column. Let’s get into the betting odds, CBB picks, and predictions for this NCAAB slate!

This is another exciting matchup in this Big 12 vs SEC Challenge. Two very good teams that love to play tough, this is what college basketball is about.

For LSU, I feel like they always have athletic big men. Darius Days has been there for a while and Tari Eason is finally finding himself in his sophomore year. Combined, Days and Eason are scoring 28 points and grabbing 14 rebounds per game.

On the side of TCU, the Horned Frogs like to play at a slower pace compared to LSU. TCU’s outcome depends solely on Mike Miles and Emmanuel Miller. These two will have to provide the one-two punch TCU needs to slow down this LSU team and I just don’t believe in them enough to do so.

West Virginia is still the same old West Virginia. They rank 235th in the country in possessions per game. I do not think their style of play will be able to stay within the number in this matchup. West Virginia usually is able to win with their defense, but Arkansas’ defense is even better than theirs.

Arkansas loves to push the pace. JD Notae is a baller and is so fun to watch. This Arkansas team made it to the Elite Eight last year, and they’re back to prove that they are good enough to go farther. I love Musselman as their coach and think he is the extra kick to help Arkansas get a nice win in this spot.

This is a matchup that I am looking forward to. Auburn has finally earned the number one seed in the country and I personally believe it is well deserved.

Auburn is on an absolute tear as they are currently on a 16 game winning streak. I think that streak gets extended to 17 today. Auburn is a very skilled team, especially down low. Walker Kessler is averaging four blocks per game. I feel bad for the Oklahoma big men trying to get easy baskets on Kessler. Paired up with Jabari Smith who is scoring 15 points per game alongside six rebounds, these two are going to dominate the paint.

Oklahoma however, has enough to at least not get blown out. As a team, the Sooners are shooting 49 percent from the field and 75 percent from the line. If they can force Auburn to foul them and get to the line, I do think they’ll make this game respectable.

The Tigers are just across the board the better team here. The fact that Auburn almost slipped up last week will re-ignite this team and influence them to win by as much as possible. This is my best bet of the weekend.

Iowa State has a force to be reckoned with in Izaiah Brockington He is coming off a massive performance where he dropped 26 points and shot 75 percent from three. Obviously, there will be some regression but he is by far the best player on the court.

Missouri on the other hand is coming off a demoralizing loss against Auburn where they fell just short in a one-point game. I don’t see Missouri keeping up with Iowa State’s guards. Missouri’s defense has been up and down this year so it’s hard to tell which defense is going to show up. Missouri held Auburn to 55 points, but they have given up 80+ in ten games this season.

This is a matchup that we could potentially see deep into the tournament in March.

While I think we can all agree that Alabama has not been playing as well as everyone expected them to this year, they are still a very skilled team. Their three-point shooting is a bit down from last year, but they still know how to score, averaging just over 81 points per game, led by Jaden Shackleford.

Baylor is obviously a beast of a team being ranked fourth in the country. This team surprisingly doesn’t play at that high of a pace. They like to be efficient with their possessions. The Bears have a deep roster who can all shoot threes and can make free throws when they get to the line. Notably, LJ Cryer shoots nearly 47 percent from three and 78 percent from the line.

I think Alabama is desperate for a statement win here to remind everyone just how good they are. However, I do think Baylor is the better team. I’ve put my trust in Alabama too many times this year thinking they are the Alabama of last year and I have been let down every single time.

I feel like this game is going to fly under the radar a little as it includes two teams that aren’t the biggest names in the respective conferences, but this will be a good one.

Kansas State has a pretty solid roster centered around Nijel Pack. Pack is an excellent three-point and free throw shooter. He is averaging 42 and 87 percent in those two categories. As a team, Kansas state is more well-rounded in my opinion. They have a deeper bench, so when the starters rest or get into foul trouble, I am more confident in Kansas State’s bench compared to Ole Miss.

Ole Miss does have a couple of good role players on their team that I think make them a good underdog team to take points with, just not in such a low spread game like this one. I think the skill disparity between these two will be enough to secure the Wildcats a close victory.

Oklahoma State is an interesting team this year. This is obviously a down year for them as they are currently sitting at eighth in the Big 12. I do believe that this Oklahoma State team is talented enough to add onto some of their good wins already, but not in this spot. They are also coming off of a deflating game against Iowa State where they fell short in overtime.

Florida is going to be able to win the battle down low with Anthony Duruji. Duruji had a big performance vs Tennessee and I believe we will see a similar performance from him here. He will be the key to Florida winning this one in a convincing win.

We all knew this was the blue blood match-up the NCAA was going to give us. This is game is going to be a war. These two teams have tons of talent all across the board.

For Kentucky, Oscar Tshiebwe is a monster down low. He is averaging 16 points and 15 rebounds a game. I personally don’t know how you slow this man down. Kentucky is also good beyond the arc shooting 35 percent and also great at the free-throw line shooting 73 percent.

Kansas on the other end of the court has a man named Ochai Agbaji, who is averaging 21 points per game. Agbaji is getting 25 percent of Kansas’ total points. I do think along with Christian Braun, these two will have the firepower to keep Kentucky at bay.

Kansas does get the important home-court advantage in this matchup. I do believe with Agbaji leading the team, that Kansas will get the win in this intense battle.

Mississippi State has been a surprisingly good team this year. They have several talented players in Molinar, Smith, and Brooks. These guys know how to get buckets and Molinar specifically knows how to dish the ball well with this team. I do really like this team, but they are running into a brick wall against this Texas Tech team.

Texas Tech is undefeated at home this year. The Raiders also have the 8th most efficient defense in the country. This is not a team to take lightly this year at all. This is a good opportunity for this Raiders team to put behind that loss to Kansas in overtime behind them and get back on track with a decisive win over Mississippi State.

Tennessee has a lot of guards on their team that shoots the three-ball fairly well. While he is not averaging many points per game, Olivier Nkamhoua is shooting 44 percent from three and 51 percent from the field. The Volunteers are very good at sharing the ball hitting 17 assists per game. However, they could be passing it around a bit too much as they are turning the ball over 13 times per game.

Taking a look at Texas, this is going to be tough for Tennesee. The Longhorns have the fourth-ranked defense in terms of efficiency in the country. A big positive I factor in for this Texas team is that they are also an older team. There is a big difference in strength and basketball IQ when it comes to an 18-year-old and a 21-year-old.

I like Texas laying the small number here at home.

All odds as of Friday, January 28th