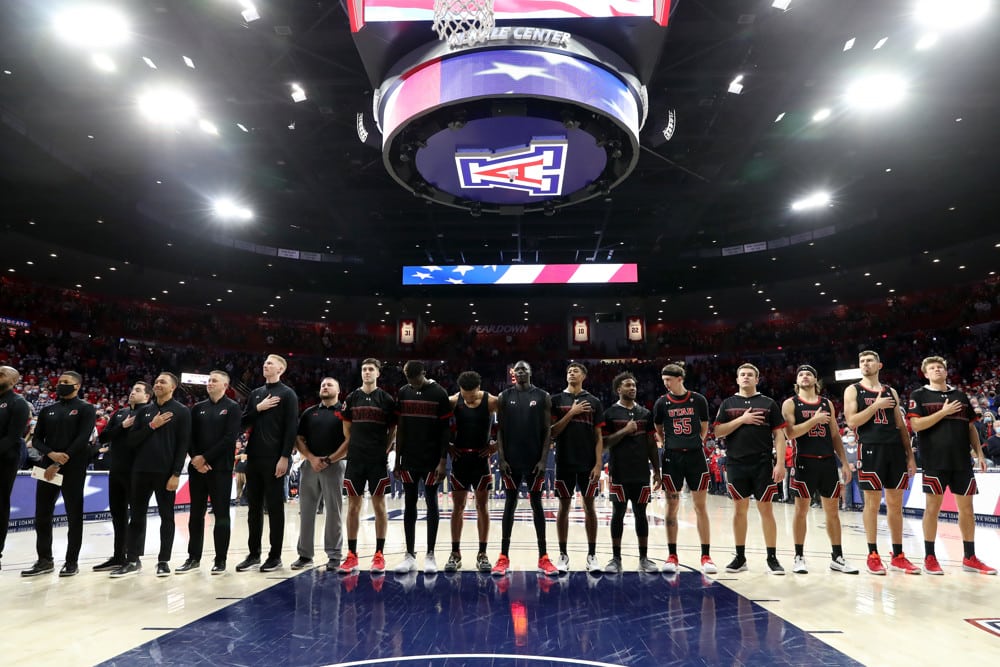 College football is now officially over but there are still intercollegiate wagering opportunities. The College Basketball season is in full swing and March is going to be here before we know it. Time for some CBB picks and best bets.

Now that my Saturdays are college football-less, I am once again blown away by the number of games that get played on a single Saturday, madness! I took some time to look over the healthy-looking Saturday slate and selected three games I think have some betting value.

Let’s kick things off with a matchup that features two Atlantic 10 foes facing off at the Siegel Center. The VCU Rams will host the Hawks of Saint Joseph’s. The two teams are similar in a lot of ways offensively but drastically different teams defensively.

I expect quite a matchup issue for Saint Joe’s here as VCU comes in 4th in the country in defensive efficiency. VCU also ranks 12th in the nation in terms of defensive field goal percentage. This is going to be an issue for the Joes because they rank just 194th nationally in terms of offensive efficiency. Saint Joe’s also ranks just 180th in field goal conversion rate. VCU will be quite the test for the Hawks who have struggled shooting the ball consistently.

Now that we’ve discussed the major difference between these two squads let’s look at some similarities. I already mentioned Saint Joe’s doesn’t shoot particularly well but neither does VCU. The Rams rank an abysmal 314th nationally in terms of points per game. Saint Joe’s won’t wow anyone with their defensive prowess, but as the 103rd ranked team in terms of defensive field goal percentage, they will still provide a test for a team that can struggle to shoot at a decent percentage.

More things these teams have in common include neither squad not rebounding all that well. Both teams rank around the “middle of the pack,” in terms of offensive rebounding according to Haslametrics. This will limit second-chance opportunities on offense for both squads. Lastly, these two teams are not particularly versed in getting to the charity stripe. VCU comes in at 237th nationally in terms of free throw attempt rate and Saint Joe’s just 262nd. With all that said I think we see both teams struggle to score here with VCU being able to especially frustrate the Hawks from the field.

I see a lot of similarities in this Big 12 matchup as I do in the previously broken down Atlantic 10 matchup from my first best bet. TCU plays the role of Saint Joseph’s here who has struggled offensively this season mightly. The Horned Frogs also have the misfortune of playing a stiff defense which should stifle this already poor shooting squad. TCU comes in at just 139th nationally in terms of offensive efficiency. The Horned Frogs rang 177th nationally in points per game and just 190th in field goal percentage.

Iowa State does their best VCU Rams impression here as they rank just 173rd in the nation in terms of points per game. TCU like Iowa St has quite the defensive themselves and this total is set low for that very reason. I just do not think it’s set quite low enough. Both these teams play to a snail’s pace, TCU comes in at 290th in-game tempo, and Iowa St just 184th. I also look again at the free throw metrics of these two squads. TCU does a decent job at getting to the line at 120th in the nation. However, the Horned Frogs shoot poorly from the line at just 275th in the nation. Iowa St only gets to the line at the 183rd mark in the nation and they don’t make the most of their opportunities either at just 166th nationally.

I see these two squads continuing to struggle from the field and stay sharp on the defensive side of the ball in what should be an exciting defensive matchup.

One thing you love to see in a hungry road dog is a team that rebounds. LSU has been solid rebounding all year but more importantly, where they’ve excelled is on the offensive boards. LSU has done a great job of converting their 2nd chance opportunities to the 25th best mark in the nation. These two teams differ greatly offensively, LSU comes in with the 73rd best field goal percentage this season. Tennessee sits at just 132nd in the nation which will be a solid disadvantage for them against LSU. The Tigers defense has been rock solid coming into this SEC clash with the nation’s top defensive field goal conversion rate according to Haslametrics.

Lastly, I’d like to point to a somewhat looked at aspect, and that’s consistency. Sometimes with a road dog, you run the risk of seeing a deviation from their play based on a new environment/being away from home. Consistency becomes extremely important and LSU ranks 103rd in the nation while Tennessee comes in just 348th in this metric. I like LSU to keep this game close and give them a great shot at winning this thing outright.