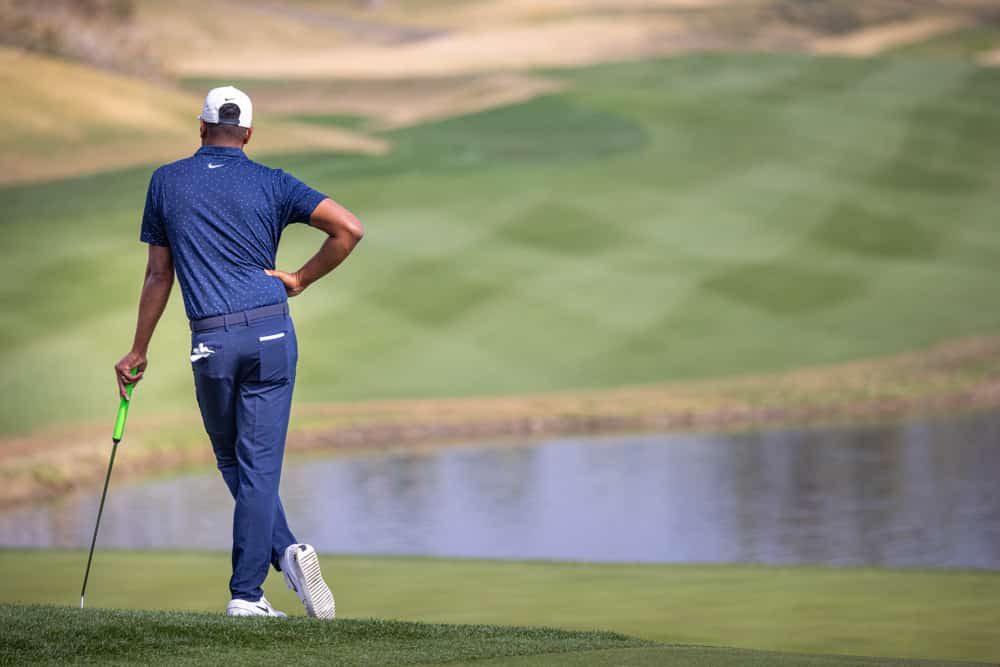 The American Express Preview – The Field

Typically the American Express features a very top-heavy field. This year is no exception. Headlining the field is World #1 player Jon Rahm. Rahm nearly won the Sentry Tournament of Champions two weeks ago. He played outstanding. He showed no signs of slowing down after a career year in 2021. Rahm won this event in 2018 and will look to claim another title in Palm Springs.

Also highlighting the field is Patrick Cantlay. In 2021, Cantlay made the cut on the number in this event. But, he went 18 under across Round 3 and 4 to nearly steal the win away from Si Woo Kim. In the end, however, he fell just short of capturing his first American Express title. He’ll look to capture the win in 2022.

Last year, COVID altered the format of The American Express. The tournament was played across the Stadium Course and the Nicklaus Tournament Course at PGA West on Thursday and Friday. The final two rounds were played exclusively on the Stadium Course. But in 2022, the tournament reverts back to its normal format. La Quinta Country Club is back on the rotation in 2022. Everyone will play all three golf courses across Thursday through Saturday. After Saturday, the Top 65 and ties will play the final round on Sunday.

The TPC Stadium Course at PGA West was designed in 1986 by legendary architect Pete Dye. Dye is the greatest modern golf architect and is responsible for dozens of innovative golf courses. He wanted a player to think their way around a golf course. He also loved to play mind tricks on them. Dye once said “Golf is not a fair game, so why should I build a fair golf course,” and built them with this adage in mind. He was an inspiration for many of today’s designers.

TPC Stadium Course was built as a “sequel” TPC Sawgrass. The course first played host to the Bob Hope Classic in 1987, but the pros complained that it was way too hard. It was removed from the tournament after only one year.

One can see Pete Dye’s fingerprints all over the Stadium Course at PGA West. Several holes borrow template holes from TPC Sawgrass and other Dye designs. Here are a few holes at the Stadium Course that are very much inspired its sister on the East Coast:

Both holes make use of elongated bunkers off the right side of the fairway. On the left, a water hazard eagerly awaits extremely offline tee shots. The greens are angled at about 2:00 off the fairway. They also feature large bunkers short right and long left. The 9th at the Stadium Course also adds a large bunker back right to punish players who fly the green.

The 12th at the Stadium Course is a smaller version of the 10th at TPC Sawgrass but possesses similar features. Both have Dye’s trademark elongated bunkers hugging the left side of the fairway. The 10th at TPC Sawgrass has a horseshoe-shaped bunker that doesn’t come into play at all for a professional, so it appears Pete Dye relocated it to wrap itself around the left side of the 12th green at the Stadium Course to give them something to worry about.

The most blatant rip-off at the Stadium Course is the 17th. It’s a Par 3 featuring an island green and an almost photocopy of one of the most famous holes in golf – the 17th at TPC Sawgrass. For the most part, I’m fine with trying to create TPC Sawgrass West, but here ends my heaping praise of the late great Pete Dye. This hole is symbolic of my biggest issue with the Stadium Course (besides the ridiculous canyon bunker off the 16th green). The Stadium Course is more Disneyland to TPC Sawgrass’s Disney World. The RC Cola to Sawgrass’s Classic Coke. Sure you can see the penmanship of a TPC Sawgrass at this golf course, but it rings a tad soulless, has a peculiar aftertaste, and makes you yearn for the real thing.

It also doesn’t help that the golf course looks AWFUL on television. Large swaths to dormant, brown Bermuda rough surround the lush, overseeded green fairways and putting surfaces. Bermuda grass takes a while to recover from cooler winter temperatures, and the still-dormant Bermuda rough makes the telecast look especially bland. Depending on the time of year, some of the Bermuda might be emerging from dormancy creating this muddled mix of green and brown off the fairway. Not exactly the prettiest sight to see. It’s visually lackluster after spending the last two weeks in Hawaii watching surfers and whales crash through the vibrantly blue Pacific Ocean. It brings down the enjoyment of the viewing experience overall.

The second course this week is the Nicklaus Tournament Course. It plays much easier than its PGA West counterpart:

The Nicklaus Tournament Course looks like any golf course in Florida or the Southwest. Not a lot of creativity or strategy is required as it weaves its way through retirement communities. It’s meant to serve as an enjoyable, laid-back round of golf. Most trouble off the tee is very easily avoidable by the pros thanks to generously wide fairways and their ability to hit over most fairway hazards. This course will play much easier than the Stadium Course this weekend.

The third golf course in the rotation is La Quinta Country Club. La Quinta is the oldest of the three golf courses. It also plays by far as the easiest:

While the sightlines from the tee are tighter than they are at PGA West, this golf course has almost no defenses for anyone on the PGA Tour. Most fairway bunkers can easily be carried off the tee, and save for a water hazard off the 16th and 18th it takes some serious effort to shoot over par at La Quinta. Players have to capitalize when they get to La Quinta if they want to fight for the win on Sunday.

Bettors usually have a few challenges when handicapping this event. For starters, the winning score at the event is typically in the low 20’s under par. The Stadium Course definitely can give one fits if they don’t bring their A-game. However, it isn’t impossible. Patrick Cantlay shot 61 on it in the final round last year. Si Woo Kim shot 64 to hold on to the win. And both the Nicklaus Tournament and La Quinta golf courses can yield real low scores. Events like this often turn into a putting contest and allow poorer, less consistent ball strikers to compete with premium ones. Tournaments like these sometimes are like Russian roulette.

Another challenge is that only the Stadium Course has strokes gained data captured during play. Neither the Nicklaus Course nor La Quinta featured ShotLink data to decipher how to score best there. Last year, bettors could focus only on the Stadium Course. Three of the four rounds were on that golf course. But in 2022, bettors need to focus on three venues.

Here are skill set charts for the golf courses: 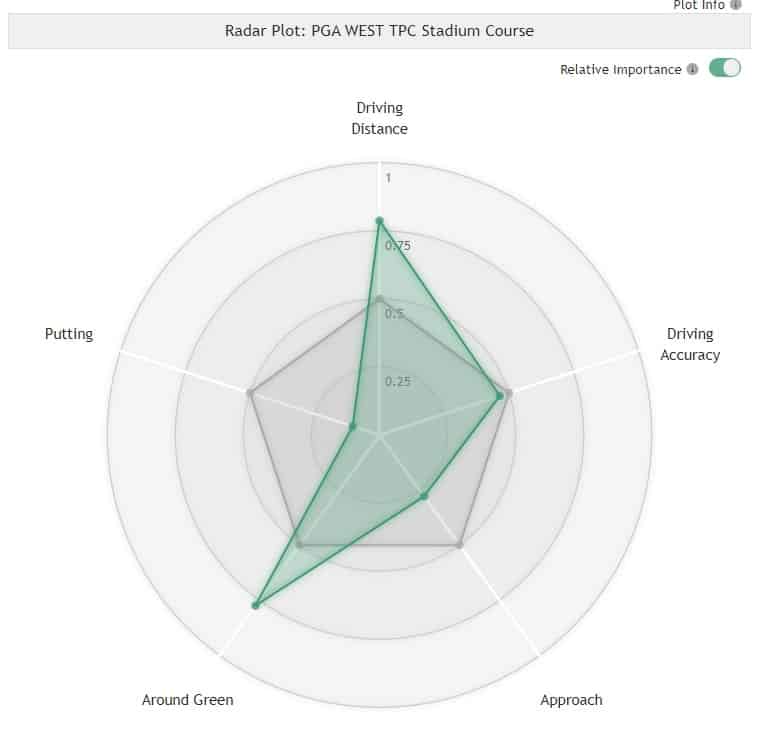 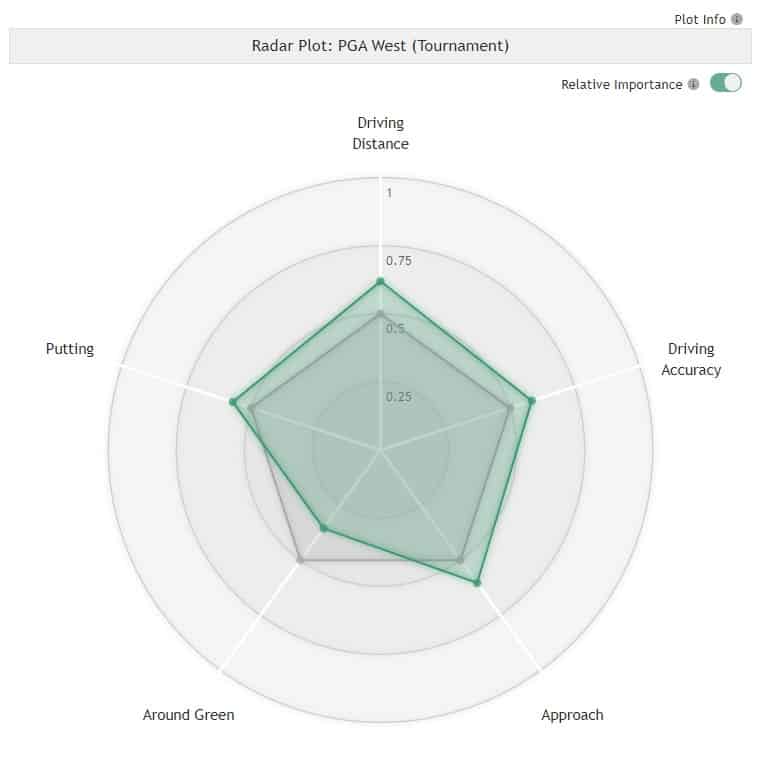 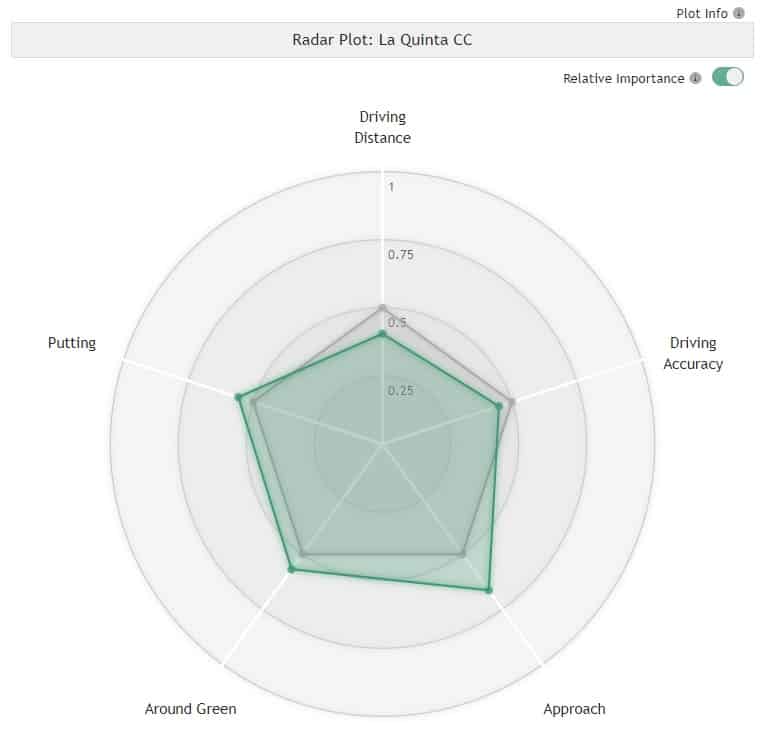 All three golf courses cater to different players. Bombers and short-game specialists have the edge at the Stadium Course. Iron play, short game, and putting is the name of the game at La Quinta. And a combination of long and straight off the tee, along with great iron play and putting is the most important at the Nicklaus Tournament Course. And in combination, essentially one has to do a lot of things really well to win this tournament. All this is helpful for round-by-round matchups at each of the venues. But for tournament-long information? Not so much. Since there isn’t a clear consensus on one dominating trait above all, try and target golfers with multiple solid skill sets.

Another thing bettors can look at is performance on overseeded surfaces. The golf courses were closed in the fall and overseeded with poa trivialis. The rough isn’t overseeded and goes dormant. While some Bermuda might emerge from dormancy off the fairway and around the greens, the greens and fairways themselves will be overseeded. This will make the greens roll differently than on Bermuda. Don’t fall into the trap of pigeonholing yourself into all Bermuda grass statistics.

Notable golf courses that typically feature overseeded greens when the PGA Tour rolls into town are the following:

Only the Stadium Course features ShotLink data. As such, we don’t have a clear understanding of what approach shot distances players have at either La Quinta or the Nicklaus Tournament Course. But at the Stadium Course, it’s the following:

In 2021, the Par 4’s averaged about 420 yards in length. Four are under 400 yards, however, none of them are drivable. And pulling driver on many of the other ones sometimes isn’t the best play either. Players sometimes have to lay back before the fairways pinch. Or sacrificing distance to hit off the fairway is better than risking an errant tee shot and having an awkward stance near one of Dye’s trademark moguls and humps. So even though the length of the Par 4’s isn’t very long for PGA Tour standards, players still find themselves holding a 7-PW into many of the greens.

Lastly, here are the Top 5 players in the field in Strokes Gained per round on each of the golf courses:

There’s no cross-over for anyone in the Top 5 across each golf course. There’s also an extremely small sample size of rounds played for anyone at each venue. Unlike other weeks, simply relying on course history might not be a great preview of what the leaderboard at the American Express will look like. Targeting skill sets is the better bet this week.