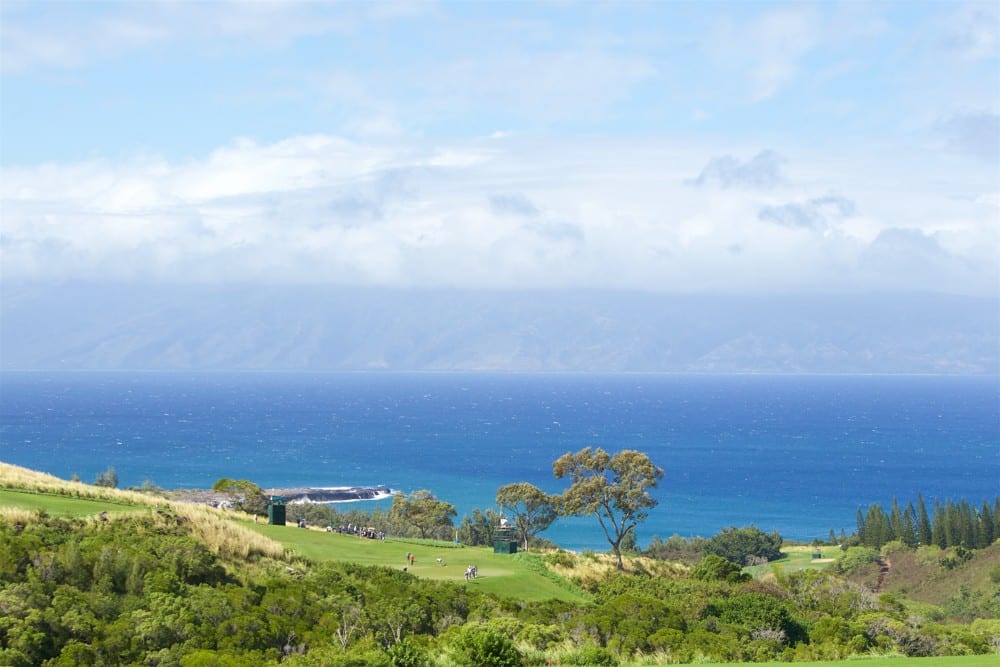 After a brief holiday break, golf is back! And what better way to welcome the return of the PGA Tour from one of the most beautiful golf courses in the world. This week, an all-star field tees it up on the Plantation Course at Kapalua for the 2022 Sentry Tournament of Champions. As always, here is your early deep-dive of the 2022 Sentry Tournament of Champions and a preview of how to bet.

Every year, all winners on the PGA Tour from last year’s Sentry TOC to now are in the field for the event. Nearly every winner from the 2021 year will be in Kapalua this week. Highlighting the field this week is Collin Morikawa, Jon Rahm, Justin Thomas, Bryson DeChambeau, Jordan Spieth and Brooks Koepka.

That’s just scratching the surface of the depth of the field. This tournament is loaded with talent. Over two-thirds of the Top 30 in the world will play this week at Kapalua. In past years, top players would skip this event and opt to make their debut at Torrey Pines. But they’ve learned that this event is essentially a nice post-holiday trip to Hawaii at a beautiful resort for a guaranteed paycheck. Why wouldn’t anyone want to play this event?

The only player eligible for the tournament who won’t play this week is Rory McIlroy. Rory typically doesn’t play the Tournament of Champions, so his absence isn’t a surprise. He expressed how fatigued he was last Fall, and he’s taking some more time to appreciate being a father. He’ll make his debut at the Farmers Insurance Open in a few weeks.

There is one player who technically shouldn’t have an exemption in this field, but received one anyways. The PGA Tour granted an exemption for Xander Schauffele to play the Tournament of Champions. This is the second consecutive season Xander didn’t win on the PGA Tour, yet found himself in this event. His win at the Olympics was good enough to earn an invitation. Maybe it was an attempt to invite the definitive Horse for the Course. In his last three appearances, Xander has a win, a T2 and a T5 finish at Kapalua. He’ll look to officially earn his way back to Kapalua with a win this week.

The Plantation Course at Kapalua was designed by Ben Crenshaw and Bill Coore in 1991. It has played host to the Tournament of Champions since 1999. Pros and amateurs alike rave about the course. From its breathtaking views overlooking Honokahua Bay and Molokai Island to its wide fairways, the course is both fun and challenging to play because of the elevation changes and the possibility the prevailing ENE winds wreak havoc on the golf course.

The round kicks off on the downhill 520 yard Par 4 running towards the bay. For a right-handed golfer, a draw off the tee should allow the winds to assist the golf ball towards the slope about 312 yards away and funnel the ball down the hill. Those who successfully navigate the ball down the slope will set up the perfect angle to a left-to-right sloped green with a mid-iron. Because of the helping wind and the downhill routing, almost everyone gets their tee shot to the bottom of the hill for a great look at the pin. And driver definitely is overkill for this hole.

After taking on the Par 3 2nd, the golfers start the climb up the hill from the 3rd to the 5th hole. The total elevation change over this stretch is about 250 feet. If the wind isn’t up, these holes shouldn’t pose too big of a problem. But if it is, then tricky crosswinds will make the golfers uncomfortable, especially on the uphill approach shots. Once at the top of the hill, holes 6 through 8 take the golfer all the way back down the hill towards the bay and then wraps up the Front Nine uphill to the clubhouse.

The first half of the Back Nine loops around in a counterclockwise fashion at the bottom of the golf course, and features the dueling banjos of the 12th and 13th holes:

The golfers will have the wind at their backs at the downhill 420 yard Par 4 12th. They’ll lick their chops as they attack a 70-yard wide fairway with the driver. This hole routinely yields the longest drives of the year on the PGA Tour, as even the shorter hitters have little trouble sending their tee shot 375+ yards down the slope. As long as they avoid the centerline bunker short of the green, the 12th is a very good opportunity to card a birdie.

The 12th was the scene for one of the best drives ever on the PGA Tour:

Their feelings as world-beaters are short-lived as they step onto the tee at the uphill 407 yard 13th. The aiding wind from the 12th is now punching them right in the mouth, and if the winds are howling even the longest hitters will have trouble clearing the fairway bunker 230 yards out. Anyone who scrapes out a par at this hole will count their blessings.

After another three-hole stretch up the hill, the round concludes from the highest point of the golf course at the Par 4 549 yard 17th down to the 663 yard Par 5 18th. Despite their behemoth yardages, the holes play much shorter thanks to a helping wind and a 300-foot drop in elevation from the 17th tee to the 18th green.

The 17th is definitely reachable in two as a long Par 4. The 18th is reachable as long as players hit the speed slot down the hill. Otherwise, the ball can get caught up on a slide slope far away from the green. This makes reaching in two almost impossible, even with the wind and downhill assist.

Before the 2020 tournament, the golf course underwent a renovation. The golf course was replanted wall to wall with a different strain of Bermuda grass that’s more durable. In addition, bunkers were reconstructed and greens were renovated to provide more pin locations. This made the greens play very firm, and scores were noticeably tougher than in years past.

But with a full year of foot traffic under its belt, the greens softened up in time for the 2021 Sentry Tournament of Champions. And combined with very calm weather conditions, Kapalua was run over. The field average score on the week was -3.7. Nine players finished -20 or better on the week. And in the end, Harris English defeated Joaquin Niemann in a playoff after both finished their 72 holes at -25.

The Plantation Golf Course is one that suits a variety of skillsets. Huge fairways and wide landing zones help create a lot of parity. Bombers enjoy the golf course because of the wide corridors and big driving distances they can get. Short knockers also enjoy the extra roll down the fairways as well as the closely mowed areas around the green, giving them an edge scrambling. Historically, the Sentry Tournament of Champions usually breeds a very diverse leaderboard.

It’s part of the reason why, other than driving accuracy, there are many ways to skin a cat on the Plantation Course: 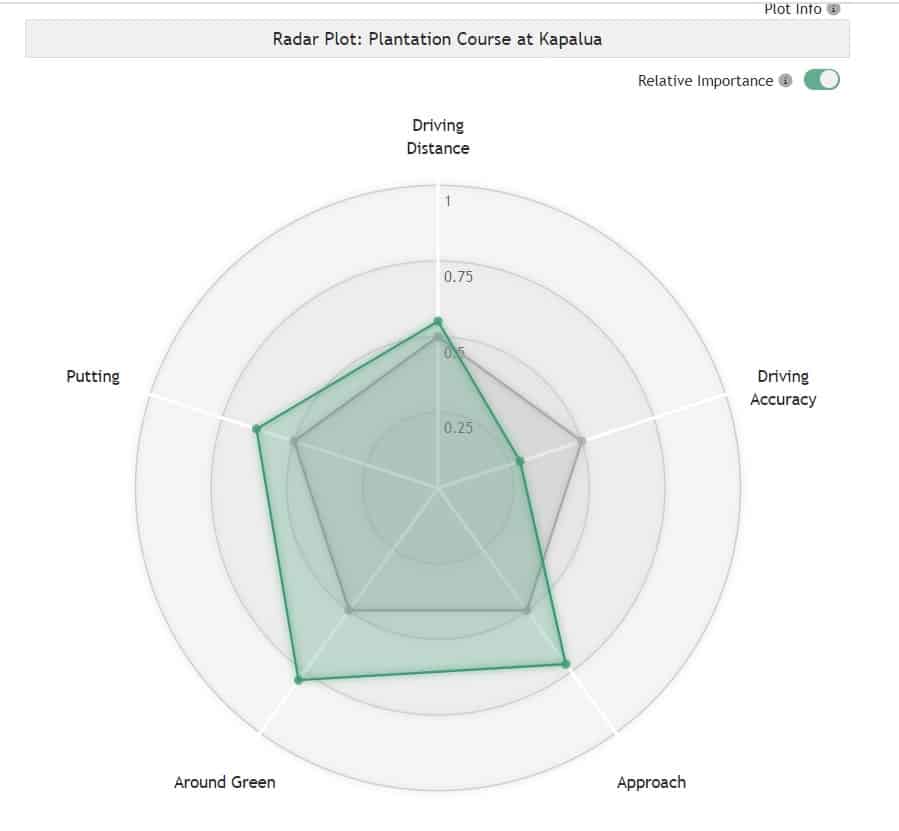 Winners at Kapalua include Harris English, Justin Thomas (x2), Xander Schauffele, Dustin Johnson (x2), Jordan Spieth, Patrick Reed and Zach Johnson. All of them get around in different ways. Dustin Johnson is best known for his power. Zach Johnson for his accuracy. Patrick Reed and Jordan Spieth for their scrambling and putting. Justin Thomas for his elite ball striking. Xander Schauffele for his all-around game. And Harris English does a little bit of everything well too. Long story short, anyone from Abraham Ancer to Bryson DeChambeau is live.

What are some ways to separate the wheat from the chafe? For one, targeting better putters on Bermuda surfaces helps (though that doesn’t explain Xander’s dominance here). And Kapalua sees a very diverse array of approach shot distances:

While there’s an above average rate of short and long approach shots, there’s not a strong concentration of any type of approach shot on the Plantation Course. Everyone will have to hit a wide variety of approach shots into the greens. Having a very diverse and strong arsenal through the bag is a big plus at Kapalua.

Unfortunately, everyone enters this tournament completely ice cold. Sure, bettors could reference long term stats in order to make picks. But that might be completely irrelevant now. This is a tournament where bettors who have a great feel of each player will have an edge over the spreadsheet jockeys.

Lastly, here are the Top 10 players in the field this week from Historical Strokes Gained/round at Kapalua: